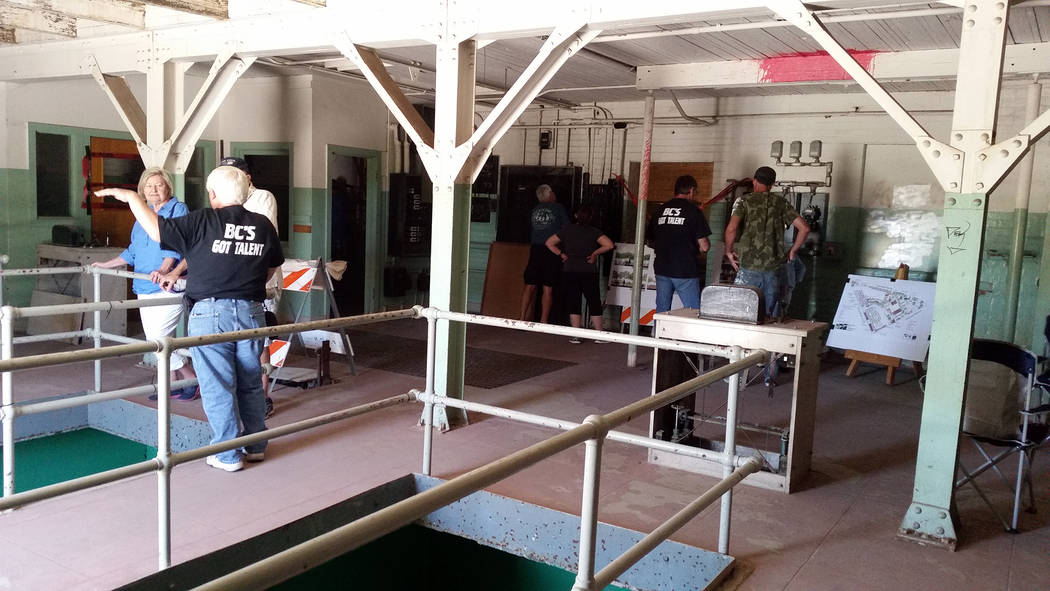 A new facilities study commissioned by the city finds that the old water filtration plant, seen in 2018 during Historic Preservation Day, needs “considerable maintenance and repairs” and that “there are no suitable uses for the building or site.” The study will be discussed at a City Council workshop at 9 a.m. Tuesday, Feb. 4, 2020.

A consultant is recommending changes to several city buildings, according to a recently released draft report that will be presented to City Council at a workshop Tuesday, Feb. 4.

In early 2019, the city hired Stantec Consulting Services Inc. to complete an assessment of all its properties. According to Public Works Director Keegan Littrell, the assessment also includes recommendations for their best uses, which will be presented to council.

In the draft report, Stantec is recommending a “change of use or status” for some city buildings including the Los Angeles Department of Water and Power building at 600 Nevada Way, the water filtration plant at 300 Railroad Ave., the Elaine K. Smith Building at 700 Wyoming St. and the vacant cottage at ABC Park on Adams Boulevard.

It is also recommending the Boulder City Police Department be relocated.

Stantec wrote that the LADWP building is not “being used to its best and highest value” and should be renovated so the auditorium is restored and the rest of the space is converted to a new Boulder City welcome center and historic museum. By moving the museum, its current space at the Boulder Dam Hotel could be converted into additional hotel rooms, bringing in more money.

The LADWP building currently houses the nonprofit organization Emergency Aid of Boulder City. Stantec suggested the city purchase the building at 1404 Colorado St. as a new police department facility and use some of the space there for the nonprofit or move it to another building with surplus space.

According to the draft report, the police department building does not meet its needs because the facility “was not designed to support modern police operations,” which causes safety, accessibility, security and operational concerns.

Additionally, it does not comply with the Americans with Disabilities Act, violates federal law regarding public access and meeting facility guidelines from the International Association for Chiefs of Police.

For the water filtration plant, Stantec wrote that it is in need of “considerable maintenance and repairs.” The study also determined “there are no suitable uses for the building or site” and suggested the city repurpose it or research alternative uses and ownership opportunities so it could become an asset that is enjoyed by the public.

The draft report said the Elaine K. Smith Building was in disrepair, not up to code and has an inaccessible second floor. Considerable resources would need to be used to make it suitable for city functions.

The vacant cottage at ABC Park has safety and maintenance concerns but Stantec recommended that the city still research letting the Lend A Hand of Boulder City lease the building since it has expressed interest in doing so. The other option for the facility is for it to be demolished.

At Tuesday’s workshop, City Council members will have the opportunity to weigh in on these suggestions and share their ideas.

“We anticipate feedback from council and the public at the workshop,” Littrell said. “Staff will continue to look at the report and could potentially put forth recommendations based on items that may be needed in the upcoming CIP (capital improvement plan) and are financially sound.”

The workshop is at 9 a.m. and will take place in council chambers at City Hall, 401 California Ave.

According to Communications Manager Lisa LaPlante, the study took eight or nine months to complete and cost the city $488,510. It was originally expected to be presented in November, but was pushed to early 2020 because the city asked for more information to be included.