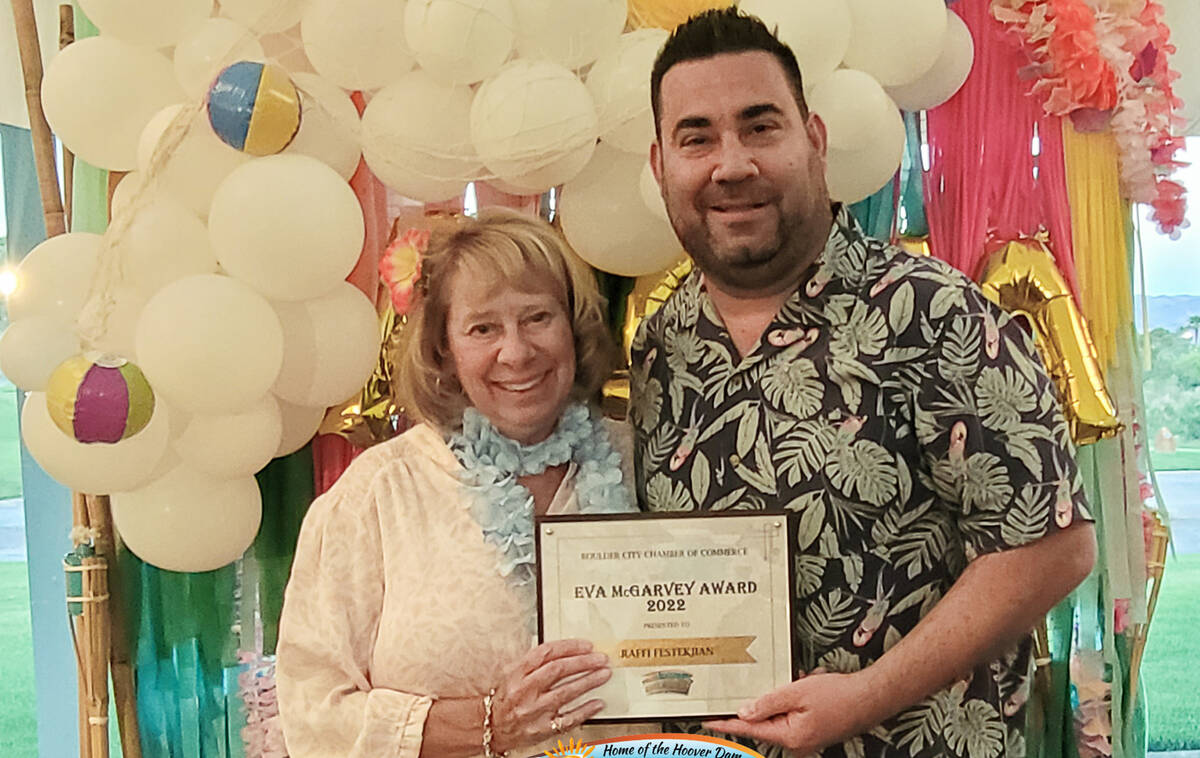 (Pam Leon/28 Sunflowers) Luana Fritz, the new chairman of Boulder City Chamber of Commerce’s board of directors, presented the Eva McGarvey Award to Raffi Festekjian, Boulder City’s economic development director, for his assistance to businesses in the community, especially during the COVID-19 pandemic, at the chamber's annual awards and installation ceremony June 2.

Boulder City Chamber of Commerce celebrated the past year’s achievements while looking forward during its annual installation and awards dinner June 2 at Boulder Creek Golf Club. The evening had a luau theme.

Al and Carri Stevens were presented with the Bert Hansen Business Person of the Year award. They were recognized for their continued support of the chamber, community and family.

Raffi Festekjian, Boulder City’s economic development coordinator, was given the Eva McGarvey Member of the Year award recognizing his “countless hours of helping the businesses” in Boulder City. Of special note was his work during COVID-19 closures to find federal, state and local programs to provide assistance to Boulder City businesses.

The Alice Isenberg Memorial Award was presented to Craig Golatti of LGA Architecture. He has worked with the chamber on various projects during the past 15 years, particularly the expansion of the Nevada State Railroad Museum as well as the adventure center project.

Jack Gaal of Jack’s Place was given the Bob Sears Lifetime Achievement Award recognizing his ongoing support of the chamber and community.

Alex Raffi of Imagine Communications was given the Goldie Begley Energizer Award for his ideas and creativity, especially in the design of the chamber’s new logo and new map featuring local dining establishments.

Boulder City Friends of the Library was named the nonprofit of the year for its ongoing support of the library and raising funds to bring in new programs, support of the staff and emergency supplies for those who “use the library for shelter and personal improvement.” The group also will be the first recipient of the chamber’s new program that sees a portion of each new member investment donated to a local charitable organization.

First Choice Tree Service was named business of the year, coming to aid the community to help manage and care for trees after the previous person was unable to. The business’ trained staff and professionalism were standout reasons for its recognition.

New this year was a Boulder City Chamber Special Recognition Award, which was presented to Lolita Haze, who directed the Miss Spring Jamboree Pin-up Contest, a first-time event at the annual festival.

The vice chairman will be selected at the next board meeting.

During the evening Rowland-Lagan also announced a $2.2 million Economic Development Administration grant from the state to create an outdoor adventure center on the grounds at the chamber’s location on Nevada Way. Through a partnership with the Nevada Commission on Tourism, adventure centers will be created in Southern and Northern Nevada.

According to Rowland-Lagan, during the coming year, 10-15 outdoor recreation operators will establish outlets in kiosks made of renovated shipping containers. There, they will be able to register their guests, have them sign waivers and watch safety briefings before traveling to their destination for outdoor recreation opportunities.

“This one-stop-shop concept, in conjunction with state welcome centers is expected to be replicated across the state in rural communities and will also have a mobile component allowing us to take the welcome center right to special events, sporting events and on site recreational events,” she said.