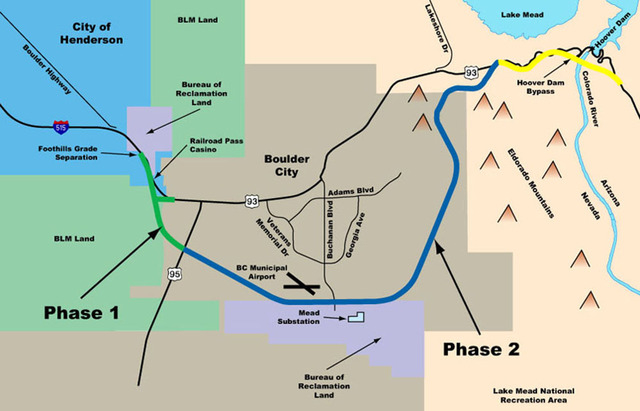 The Interstate 11 loop project inched along a little further Tuesday, with the City Council voting to grant easements to the Regional Transportation Commission.

The council approved the commission’s request for easements to construct, maintain and operate phase two of the I-11 loop, also referred to as the Boulder City bypass.

Upon a 60-day notice, the agreement states the city will grant the commission a permanent easement for the roadway corridor.

After the completion of phase two construction, the agreement states that the commission will transfer the easements to the Nevada Transportation Department for ownership, operation and maintenance.

The agreement also states that the city will not allow any access from city property to I-11.

Phase two will extend from U.S. Highway 95, a mile south of the U.S. 93/95 intersection, around the southern and eastern perimeter of the town, and connect with U.S. Highway 93 east of the Hacienda Casino.

The entire length of the I-11 loop, including the shorter phase one, is 12 miles.

Boulder City has historically supported the efforts to see the construction of I-11, which would connect Las Vegas and Phoenix, and alleviate traffic congestion. Easements for phase one construction were granted previously.

However, the council expressed concerns with the phase two easements.

The Council’s first concern was the access across I-11 during the construction period.

Mayor Roger Tobler said he was concerned about being able to cross from the central residential part of town to the outer desert areas. He said he had heard similar concerns from members of the Boulder City Horsemen’s Association.

“It’s really important to the people who recreate out there,” he said. “We need to make sure access is preserved.”

The council motioned that wording be added to the agreement stating the transportation commission will use “the best efforts to maintain access during construction.”

“You don’t want people breaking down a fence,” Councilman Cam Walker said. “Let them know there is access to the other parts.”

The council also expressed concerns regarding signage that would be placed along the completed interstate. It requested that language be added to the agreement allowing Boulder City to agree on the signage before the project is turned over to the Transportation Department.

“That signage can be life and death for tourism in our community,” Walker said.

The Regional Transportation Commission decided to move forward with the development of the bypass when the Clark County Commission passed a fuel tax in September providing funding for most of the $280 million project.

It is expected the design-build contract will be awarded in fall 2014, and it will take as long as three years to complete construction.