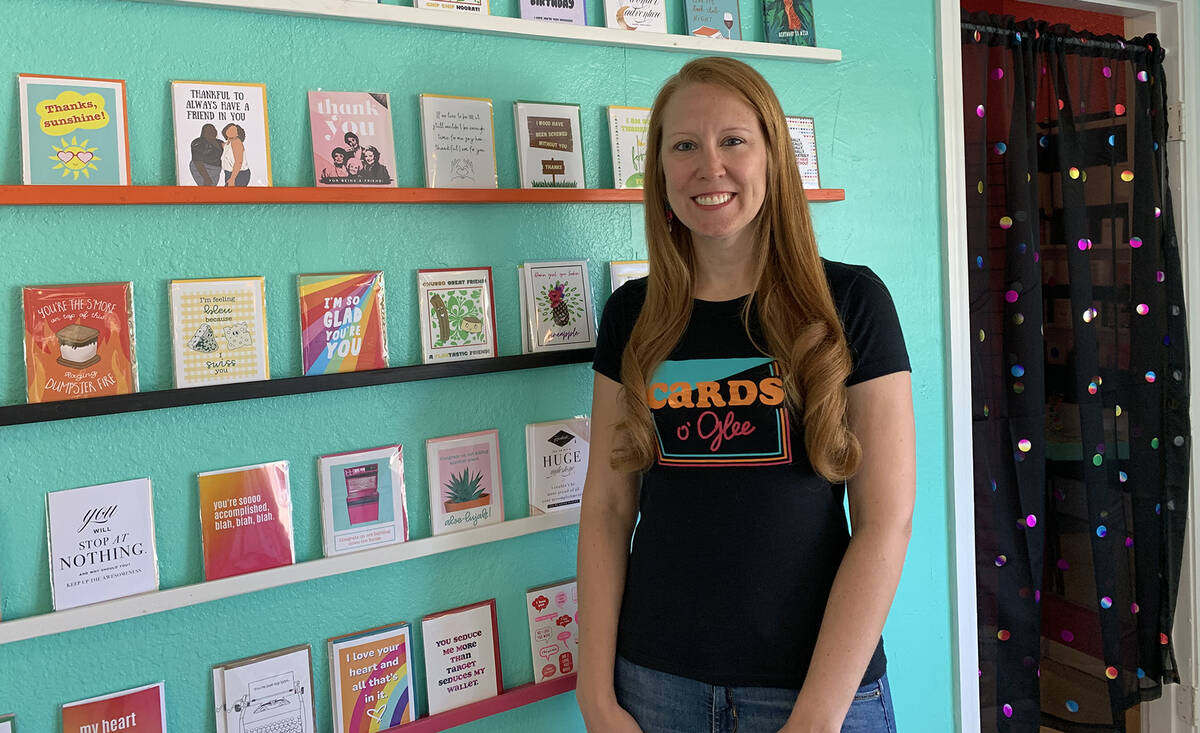 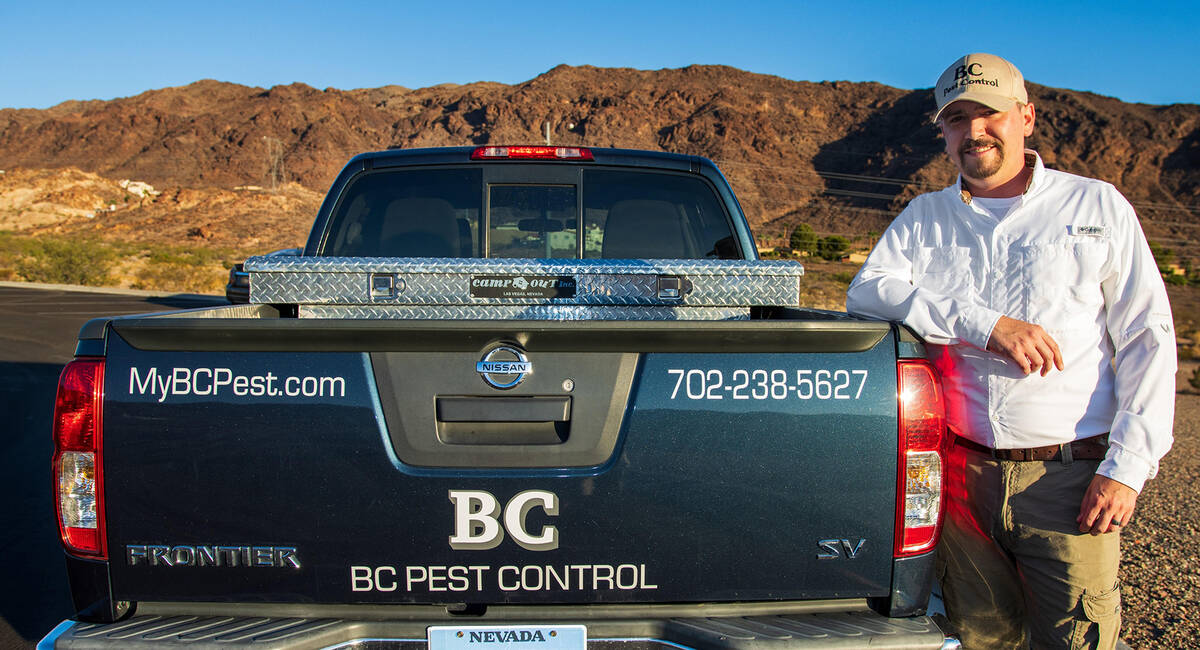 (Bill Cherwin) A love of the outdoors prompted Bill Cherwin to change careers and begin his own business, BC Pest Control.

That is exactly what she aims to do at her new Boulder City store, Cards o’ Glee.

Twardzik showcases an assortment of unique cards that she has made at the store, building upon a hobby she began as a little girl. In high school she also made them, giving her “cards of glee” to friends to celebrate passing a test or cheer them after a breakup. She even made one for a friend whose father ran over her foot.

Today, her cards are created digitally on her computer, but they continue to be something you can’t find elsewhere. Twardzik calls them “funny, punny, sweet and sweary.”

While many of the cards featured in the store are her creations, she also gets some from other small businesses, preferably those owned by women, she said.

Twardzik said it was a bucket list item of hers to have a business by the time she turns 40 on Aug. 3 and was encouraged to open the store by friends and classmates after taking an online business course during the pandemic.

Before she opened her store at 501 Nevada Way, Suite 1, she sold her cards on Facebook. Through the group she had a monthly contest where people could vote on the theme of the cards she would make, such as Mexican food, cacti and cheese, a favorite topic for the Wisconsin native.

In addition to the cards, the store features stationery, small gift items, unique gift wrapping paper, tea and tea mugs, socks, stickers and candles. She also has a selection of wax and seal stamps, which she said have become popular lately.

Her cards, stationery and gift items that are a little risque are hidden behind a black curtain with colorful polka dots that Twardzik affectionately calls the “cussing closet.”

“That’s where the naughty cards live,” she said with a smile and giggle.

Twardzik, a former English teacher who now works as counselor at Explore Knowledge Academy in Henderson, said she plans to add workshops this summer for children and adults on things such as card making, card writing, paper making and painting.

“I can’t let go of the teaching part all together,” she said. “Kids are so fun.”

It seems her students can’t let go either; Twardzik said almost every weekend one of her former students comes into the store.

Like the unique nature of her cards, all the fixtures, counters, cabinets and large central table, have been handmade especially for the store, mostly by her father, Wes Twardzik.

Another way she tries to bring smiles to her customers’ faces is by giving them a free sticker with every purchase. She has a basket with them by the register and said she enjoys watching people go through it to pick out the perfect sticker.

Once school is out for the summer, Twardzik plans to open the store from 11 a.m. to 5 p.m. Thursday through Sunday, with classes on “workshop Wednesdays.” Until then, she is open only on weekends.

Twardzik and her husband, Matt Wilson, have lived in Boulder City for the past six years.

A love of the outdoors and a pet lizard led to a career change for Bill Cherwin.

On May 1, the Boulder City resident launched BC Pest Control.

As he begins his fifth season in the industry, Cherwin said he and his wife, Kelly, decided to “take the leap to be business owners.”

Before he began working as a pest control specialist, Cherwin worked in the banking industry for 10 years.

“I love working outdoors and solving issues,” he said of why he made the switch.

Cherwin said being in the pest control industry involves a lot of math and science because of the chemicals used.

Born and raised in Southern Nevada, Cherwin said he spent a lot of time in nature, which helped prompt him to change careers.

He said he also enjoys the variety his job brings.

Cherwin said figuring out exactly what he needs to do for his clients to solve their problems is “like a puzzle.”

He said he is licensed by the state’s department of agriculture for all nuisance pets including rodents and scorpions, which he said he has a “knack for keeping out of people’s homes.”

He said he had to spend two years working for another pest control company before he could begin the process to get his primary principal license for the industry.

Aside from all the training Cherwin said he had to take to obtain his licenses for pest control and eradication, he said his “love for lizards” influenced his new career and business.

Kelly Cherwin does administrative work for the company while caring for the couple’s two children, Adelyn, 8, and Bradley, 3. They have lived in Boulder City for five years.

Bill Cherwin said that as a small business he has the ability to tailor their services to their clients’ needs.

BC Pest Control services primarily residences and commercial buildings in Boulder City, but he also will travel to Henderson.

Damon Defevre, a Boulder City resident and newly retired electrician, recently started a new business based on his love of motorcycles.

“I opened my business, Dirty Drip, because of my passion for motorcycles,” he said. “I have been riding and working on bicycles and motorcycles since I was 8 years old, watching my dad build his first bike, and that was it for me. … Now I’m doing what I truly love.”

At Dirty Drip, he offers a variety of services for motorcycles, all-terrain vehicles and many other off-road recreational vehicles.

“I do oil changes for all makes and models of street bikes, also ATV razors, (and) any off-road recreation,” he said.

He also does repairs and customization as well as selling batteries. He said he plans to start offering tire changing services soon.

We want news, tips, anything you want to tell us about Boulder City business, as long as it’s true and as long as it’s not pure publicity. Send it to news@bouldercityreview.com.