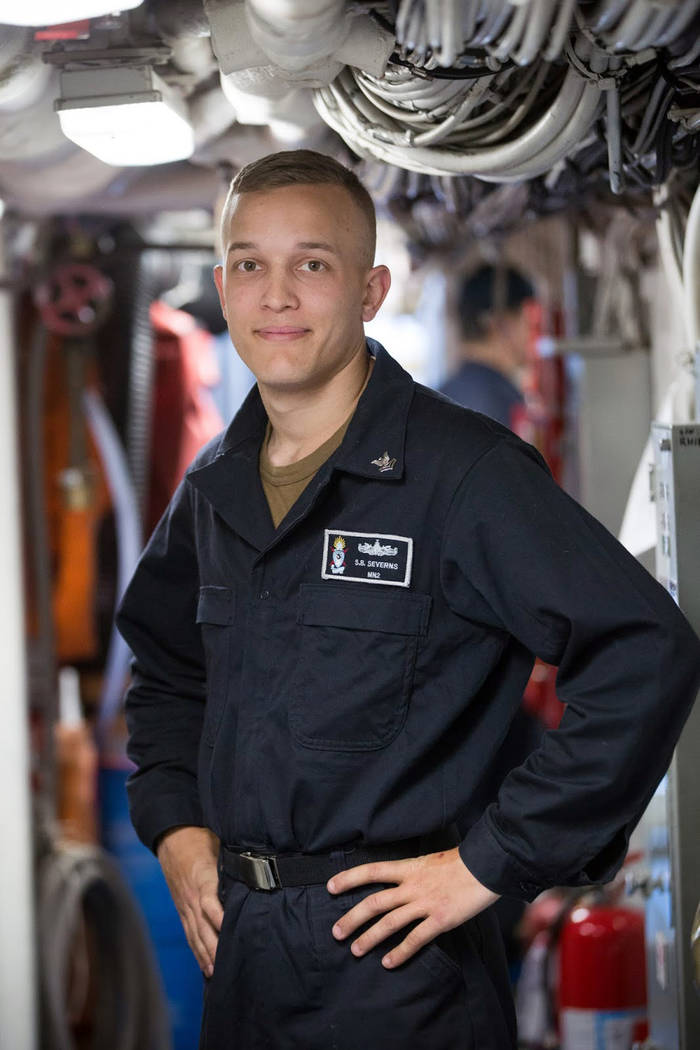 A Boulder City native and 2013 Boulder City High School graduate is serving in Japan with the U.S. Navy aboard the USS Pioneer.

Petty Officer 2nd Class Shay Severns is a mineman aboard the Avenger-class mine countermeasures ship, operating out of Sasebo, Japan. The ship is routinely deployed to protect alliances, enhance partnerships and be ready to respond if a natural disaster occurs in the region.

Severns and other Navy minemen perform their duties at sea by assisting in the detection and neutralization of underwater mines. They are also responsible for safe storage, handling and loading of mines for transporting.

“Growing up in my hometown, I learned the importance of listening and how listening can get you really far in life,” said Severns.

His accomplishments include the Presidential Volunteer Service Medal, the Navy Achievement Medal and being named USO Volunteer of the Quarter.

“I love being forward deployed because I get to see the world. I have grown very fond of the country and culture of Japan since I have been here.” said Severns. “The Navy has given me more discipline, and it opened my eyes to what we have as a country and what we are fighting for.”

As members of one of the U.S. Navy’s most relied-upon assets, Severns and other sailors know they are part of a legacy that will last beyond their lifetimes providing the Navy the nation needs.

“Serving in the Navy means doing something more than just for myself and giving back to the people who came before me, like my grandfather and my uncle,” said Severns.

With more than 50 percent of the world’s shipping tonnage and a third of the world’s crude oil passing through the region where Severns is deployed, the United States has historic and enduring interests in that part of the world.

The Navy’s presence in Sasebo is part of that long-standing commitment, Navy officials explained.

With a crew of more than 80, the Pioneer is 224 feet long and weighs approximately 1,300 tons. It is one of the Navy’s 11 Avenger-class mine countermeasures ships that are designed to neutralize mines from vital waterways and harbors. There are four minesweepers in Sasebo as part of the forward-deployed mine countermeasures force on-call to respond in the event of a mine-clearing operation in the Indo-Pacific region.

MCMs in Sasebo routinely operate with allies and partners to build mine countermeasures proficiency and sustain U.S. alliances.

The Seventh Fleet, which is celebrating its 75th year in 2018, spans more than 124 million square kilometers, stretching from the International Date Line to the India/Pakistan border; and from the Kuril Islands in the north to the Antarctic in the south. The fleet has 50-70 U.S. ships and submarines, 140 aircraft and approximately 20,000 sailors. Its area of operation encompasses 36 maritime countries and 50 percent of the world’s population.