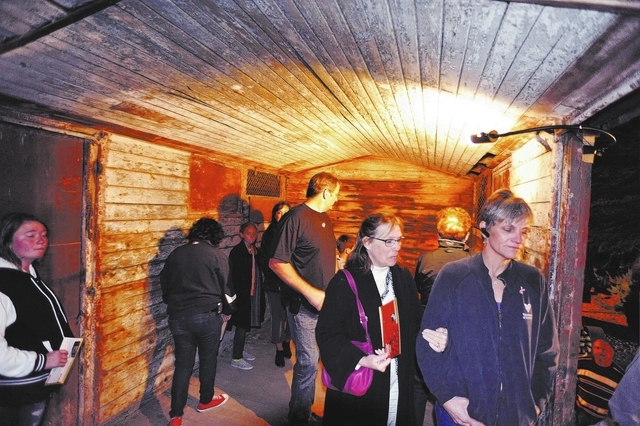 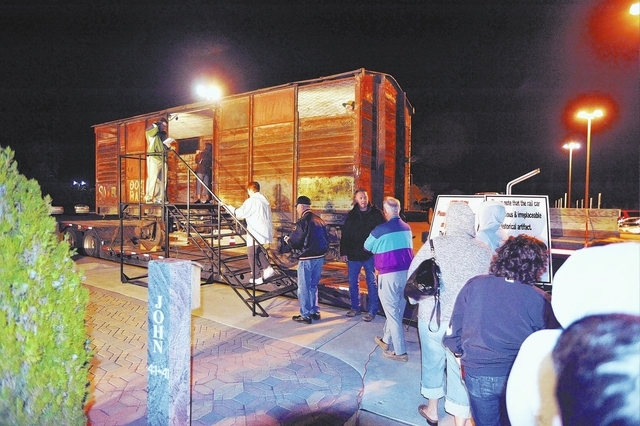 On Monday, hundreds of Boulder City adults and children viewed a railroad car used to transport human cargo to their death in a concentration camp during World War II.

The railroad car and accompanying exhibit is part of what will, in the next 2½ years, become a Holocaust Museum in Chandler, Ariz., according to Steve Tepper, executive director and CEO of the East Valley Jewish Community Center.

The car was acquired from the Macedonian Railroad Authority and traveled 11,000 miles to the Arizona location in 2012.

The exhibition came to Boulder City through the efforts of the Rev. Bob Stoeckig, pastor of St. Andrew’s Catholic Community. When Tepper spoke to Stoeckig late last week, he said he felt there “would be a strong group of people” attending the event because of the pastor’s concern and passion for the issue of the Holocaust.

Stoeckig only received confirmation of the event Oct. 31 and passed the word to all the churches in the community.

During the event, Stoeckig said, “This is an important thing to remember.” He was pleased with the dozens of children who stood in line with their parents or grandparents to walk into the railroad car. “A lot of these little kids haven’t really heard the story yet and that’s how we keep it from happening again — to keep the story alive,” Stoeckig said.

Twelve-year-old Maggie Clary came to the exhibit with her mother, Jenifer Jefferies, because she felt the Holocaust was “an important thing to learn about. It’s a big part of history.” The 12-year-old admitted she didn’t know very much about the Holocaust but knew that “it was very, very horrible.” She said she learned from the exhibit that situations can be “very, very horrible” and “you shouldn’t take things for granted.”

Longtime Boulder City resident John Barth said he attended the viewing “so we don’t forget.” He expressed his pleasure at seeing so many children in attendance.

Eleven-year-old Rome Peregrino came to see the railroad car with his grandmother, Janis Rodriguez, who told him some history of the Holocaust. Her father served in World War II and she felt a connection to the war. Rodriguez emphasized the seriousness of the Holocaust and that it was “a worldwide epidemic, everyone was affected by it, even though many people were in denial.”

“We can’t let that happen again,” Rodriguez said. She was “astounded” by the experience of being able to go into a railroad car where people were transported to their death and many died right there in the place where she stood.

There are those who deny the Holocaust, Tepper said, but there is no way to change their minds. “We try to affect the people in the middle” through education and exhibits such as the one on Monday night, he said.

Tepper said there are two tenets to Holocaust: “Never forget and never again.”

He emphasized the Holocaust “isn’t a Jewish story, it’s a human story.” Communities need to work together so that such a tragedy never happens again.

According the East Valley JCC website, the history of the railroad car began on March 11, 1943, at around 7 a.m., when the Macedonian Jews were forced to walk to the railroad station, where a train was waiting to take them away to neighboring Skopje. A temporary detention center had been established at the state tobacco monopoly warehouse known as Monopol.

The website article went on to say: “For the next 11 days Jews lived in crowded, filthy conditions in four warehouses at Monopol. The weather was cold, there was little food and few blankets, and the Jews were continually searched, beaten and humiliated.

“Three railroad transports took the Macedonian Jews from Monopol to Treblinka. The journey typically took six days, and during this time the Jews were locked in cattle or freight cars. The departure of the last train for the killing center at Treblinka signaled the final destruction of the Macedonian Jewish community.”

For further information about the Holocaust &Tolerance Museum Project and the Center for Holocaust Education, go to www.evjcc.org.