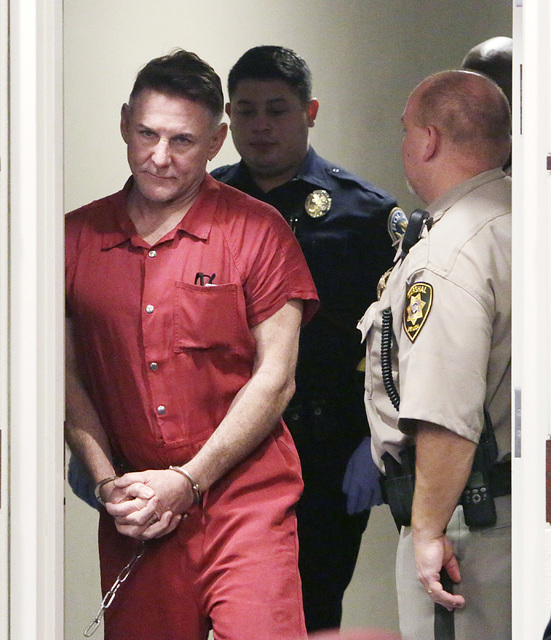 Boulder City psychologist Gregory “Brent” Dennis was arrested Feb. 2 in connection with the January 2015 slaying of his wife, Henderson attorney Susan Winters, whose death was originally ruled a suicide.

Dennis, 54, who runs a Boulder City mental health clinic, was charged with open murder with a deadly weapon. He was freed after 9 p.m. Monday from the Henderson Detention Center after his lawyers posted $250,000 bail earlier in the day. Prosecutors and defense lawyers agreed to the bail amount.

Henderson Justice of the Peace Sam Bateman ordered Dennis to surrender his passport and told him he may not leave the state without court permission.

Late Tuesday, the Nevada Board of Psychological Examiners issued an emergency order suspending his license.

The board’s suspension order was effective at 7 p.m. Tuesday and alleges that to allow Dennis to continue practicing as a psychologist “would be a danger to the public health, safety and welfare of the citizens of Nevada.”

According to the order, the board reviewed a copy of the 27-page declaration of arrest before suspending Dennis and found that it was “credible” and provided sufficient grounds to take emergency action.

Dennis’ lawyer Richard Schonfeld said late Tuesday that he was disappointed with the order.

Based mainly on information provided by Dennis, the Clark County coroner’s office concluded that Winters, a part-time North Las Vegas judge, killed herself by consuming a lethal amount of prescription painkillers and antifreeze at the Henderson home she shared with Dennis and their two daughters.

But in the declaration of arrest obtained by the Las Vegas Review-Journal, Henderson police Detective Ryan Adams alleged that Dennis originally lied to police about his wife’s death and had a financial motive to kill her.

Dennis stood to inherit roughly $2 million, including a $1 million life insurance policy, upon his wife’s death and was dealing with a cocaine addiction that was draining his finances, according to the report.

Adams concluded in the arrest report that Dennis contacted the couple’s bank more than 9½ hours before he called 911 on the morning of Jan. 3, 2015, to report his wife was unresponsive in bed.

He inquired about the balance in the joint account and later wrote a check for more than $180,000 to ensure that he would get the money before his wife’s parents prevented him from gaining access to the account, according to the report.

Dennis also was concerned that his wife would divorce him over his addiction and harm his professional livelihood by making it public, Adams wrote.

Attorney Anthony Sgro, who represents Winters’ parents, said the family is relieved now that Dennis has been charged.

“Their faith in our criminal justice system has been restored, and they are grateful to the district attorney’s office, as well as the Henderson Police Department, for reopening this investigation and drawing the same conclusion that the family did, which is that Susan did not take her own life,” Sgro said.

In another development, a Family Court hearing Tuesday centered on custody of the couple’s two teenage daughters.

After his arrest, Dennis lost custody of the daughters, 17 and 14, who have been placed with the longtime office manager of his Boulder City clinic. The girls are reportedly living with Sue Berg, who has worked with Dennis since he started his practice in 1995.

Lawyers for the Winters family appeared in court Tuesday and indicated that the family is willing to take custody of the girls.