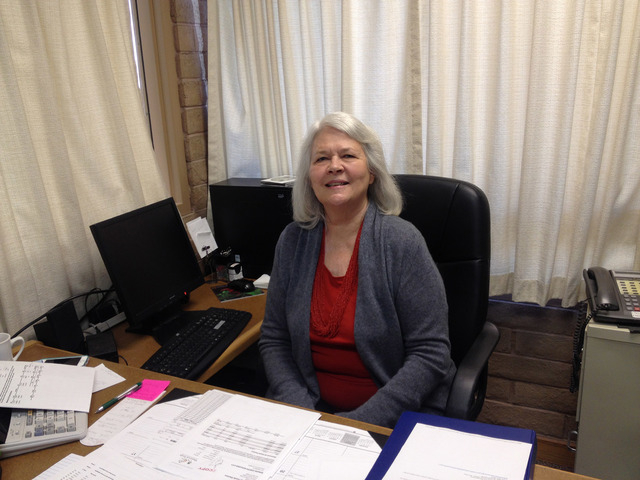 Ann Barron has only been executive director of the Senior Center of Boulder City for four days, but she hit the ground running.

The North Carolina native, who “bleeds Tar Heel blue” as she says, has been in Southern Nevada since 1982. Since then, she’s worked with St. Jude’s Ranch for Children, the Las Vegas Urban League, and Lutheran Social Services of Nevada.

But most notably, she served as the economic development director for Henderson from 1982-99.

Barron, 66, was one of more than 50 applicants from across the country to apply for the position of executive director, according to Don Sansouci, president of the board at the senior center.

Sansouci credited Barron’s experience with grant writing, fundraising and her basic interaction with senior citizens as the reasons why she was selected for the job.

Barron is no stranger to Boulder City. In the mid-1980s, she worked with Henderson and Boulder City to keep the railroad lines in town when Union Pacific wanted to abandon them.

A few years later, she was instrumental in getting federal and local block grants for a new senior center in Henderson. She said the seniors worked directly with the architects during the renovation of an old church that would serve as their senior center for the next 20 years.

“I was probably the only economic development director in the country with a senior center in her department,” she said with a laugh.

Barron and the board have been in talks about the older senior center building in Boulder City and how they plan on fundraising to ensure the building is properly maintained.

“This is a wonderful building and we want to make sure it stays that way,” she said. “It’s wait and see, but it’s also wait and listen. It’s pretty apparent walking in here that there are a million things being done right.”

As she makes the rounds talking with local partners, staff members and the senior citizens at the center she’s now in charge of, Barron said the environment has made her transition that much smoother.

“This is such a warm, friendly place. The people have been so welcoming. It’s just a comfortable place to walk into,” she said.