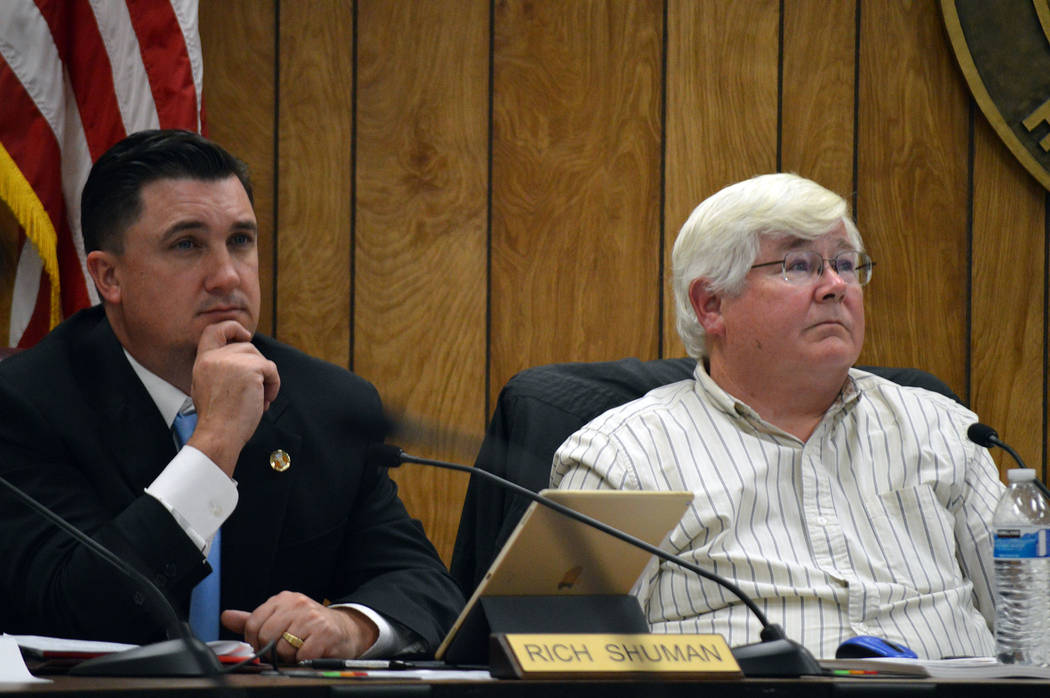 (Celia Shortt Goodyear/Boulder City Review) Councilman Rich Shuman, left, and Councilman Kiernan McManus listen to a presentation during the City Council meeting Tuesday, Nov. 27, at City Hall, where council unanimously approved acceptance of the city's financial report for the 2017-2018 fiscal year that included a clean opinion from its auditor.

At the City Council meeting Tuesday, Nov. 27, Chad Atkinson, audit partner with HintonBurdick CPAs & Advisors, presented the audit report and said they were giving the city a clean opinion.

“That’s the highest level you can get from an auditing firm,” he said.

He said the city did have one budgetary compliance issue: The aviation and cemetery funds had exceeded their approved budgets.

“You should review your budgets and amendments so you don’t exceed your budgets,” Atkinson recommended.

Despite the issue, the city did follow correct accounting procedures.

“In our opinion, the city of Boulder City complied, in all material respects, with the requirements identified above for the year ended June 30, 2018,” HintonBurdick wrote in its report.

Atkinson said that all the city’s fund balances had a positive trend.

“This is good news,” said Councilwoman Peggy Leavitt. “I think our city is in the best position it’s been since I’ve been on council.”

Mayor Rod Woodbury said he agreed with Leavitt and that a clean opinion with no findings was pretty impressive. He also congratulated the staff and auditors for their work.

Per Nevada Revised Statute 354.624, the city is required to submit a complete set of its financial statements within six months of the close of the fiscal year. The statements must follow the accounting principles generally accepted in the United States and must included an annual audit performed by an independent firm.

This year is the first HintonBurdick has performed the city’s audit. It was previously done by Piercy Bowler Taylor & Kern, but its contract had expired after last year’s audit.

HintonBurdick has several locations throughout Nevada, Arizona and Utah. It was one of the finance department’s top choices and had excellent references, according to Boulder City Finance Director Diane Pelletier.

Its price of $59,000 for the audit was in the middle range with the other submitted proposals.