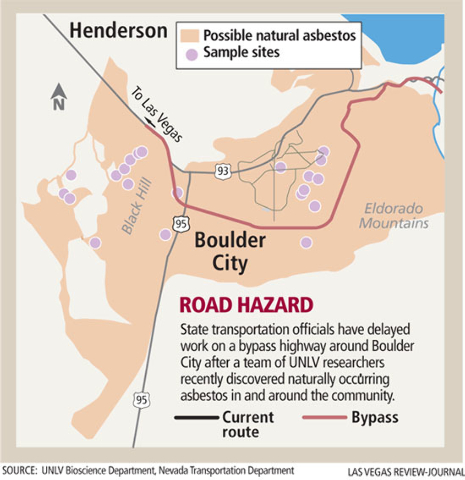 The UNLV professors who discovered naturally occurring asbestos in Boulder City last year will give a presentation at the Boulder City Library to answer questions for residents still concerned about the potential health risks.

The problem, according to experts, is that there is not enough information available to determine just how much exposure poses a risk to those who aren’t working directly with the particles.

“Basically, we don’t know what the health risks are because the risks we do know about were based upon occupational exposures,” said Donald Halterman, a mineralogist with the Occupational Safety and Health Administration. “We’re still looking for substantial data on any health risks to exposures on the general public.”

With plenty of data to present, Buck said they plan to keep their presentations brief so they have more time to answer questions. Buck and Metcalf published a paper about their findings last year, and another one is expected to be released at the beginning of next year.

“We can all just make better decisions if we’re better informed,” Buck said.

The Nevada Transportation Department and the Regional Transportation Commission conducted a combined 600 tests in the area amid the discovery. The tests determined the amount of asbestos was in minimal concentrations and representatives said they don’t see it posing a serious threat.

None of the 150 surface and subsurface rock and soil samples taken by the Transportation Department had concentrations above 0.25 percent, according to test results.

Of the 461 samples tested by the commission, 14 had concentrations above 1 percent, the level where measures need to be taken to reduce risks of exposure. Some of the actions include thoroughly wetting work areas, avoiding the overfilling of work trucks, and reducing driving speeds in work areas, according to Steve Cooke, environmental manager for the Transportation Department.

Still, Buck said she’s concerned for the residents, even after the agencies plan to keep work areas safer and dust exposure to a minimum.

“The risk they’re talking about is just the highway workers. I haven’t seen anything about the residents,” she said. “The question everyone wants to know is, ‘Am I safe?’ And we don’t have those answers yet.”

Buck said she and Metcalf were asked by Boulder City residents to speak about their findings so they could inform those who still have questions about naturally occurring asbestos in Boulder City, as well as other parts of the valley. She said they won’t have the answer to every question, but health concerns will be the main issue they’ll tackle during the meeting.

David Berry of the Environmental Protection Agency will join them to talk about health risks and discuss other places across the country where naturally occurring asbestos has been discovered.

“Yes, California has a lot of naturally occurring asbestos, but many of those counties have a different kind of mineral, which is significantly less harmful healthwise,” Buck said of the results. “I think we still don’t understand what the health outcomes are.”

Cooke admitted that the discovery of the naturally occurring asbestos was not something the Transportation Department was expecting.

“It wasn’t something we were anticipating, and we struggled with it a little bit,” he said.

Buck said she’s encouraged by the precautions being taken to make the area safer during I-11 construction, but she remains leery of the findings and how they’ll affect residents once the project is complete. Proper steps must be taken to protect everybody, not just the workers, she said.

“I feel that naturally occurring asbestos is similar to the sun,” she said. “The sun causes cancer. That’s why we put on sunscreen.”

Las Vegas Paving Corp., Ames-Fisher and Eldorado Mountain Constructors are the three companies bidding on the project. The winner will be picked Dec. 11.

Construction is set to begin in May.