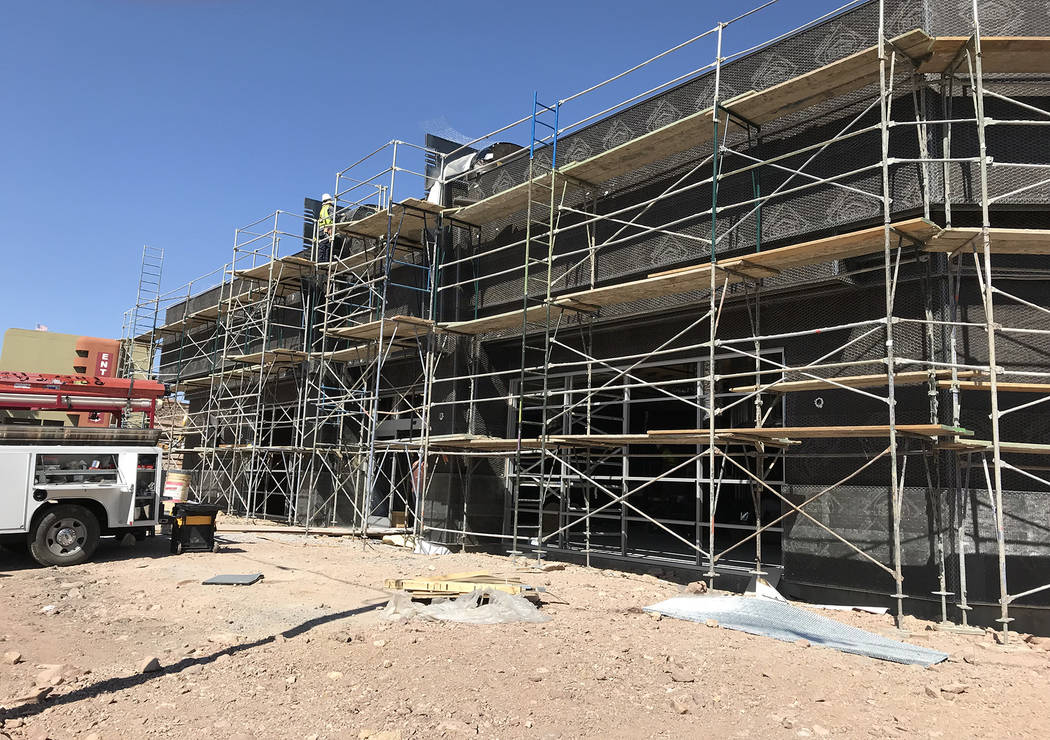 Hali Bernstein Saylor/Boulder City Review Work continues on the convenience store that is part of the Railroad Pass' new travel center. Plans call for it to be open Jan. 1, 2018. 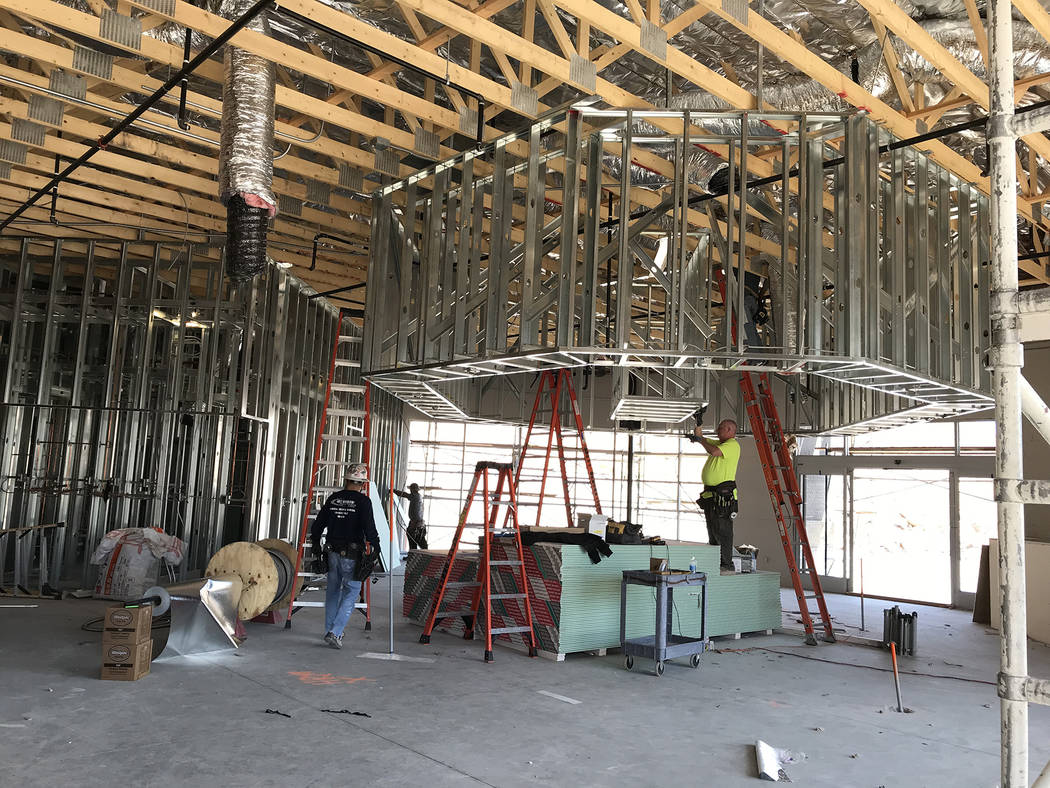 Hali Bernstein Saylor/Boulder City Review Work progresses on Oct. 12 on the new travel center at Railroad Pass, which will include showers, seen under construction at the far left, and a concierge/check-in area. Plans call for the facility to be open on Jan. 1, 2018. 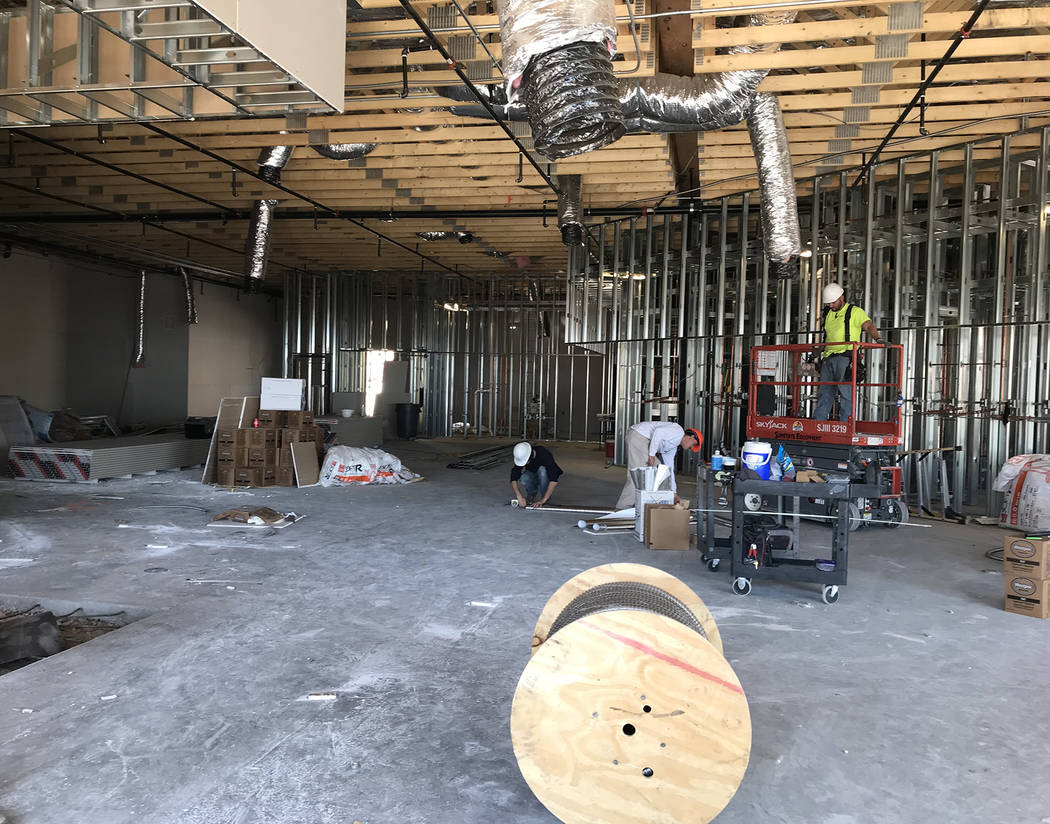 Hali Bernstein Saylor/Boulder City Review Work progresses on Oct. 12 on the new travel center at Railroad Pass, which will include showers, seen under construction at the far right, and a variety of items needed by truckers and travelers, which will be housed in the area on the left, along with a bank of refrigerated cases that will hold cold beverages. Plans call for the facility to be open on Jan. 1, 2018. 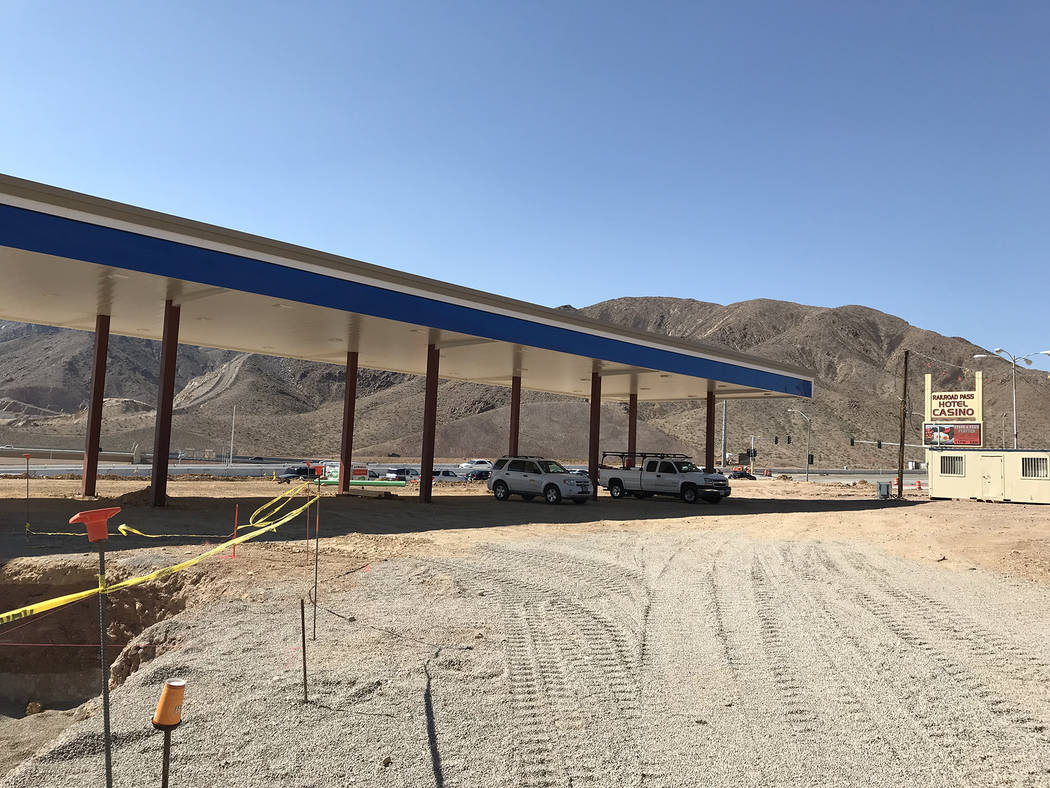 Hali Bernstein Saylor/Boulder City Review Work progresses on Oct. 12 on the new travel center at Railroad Pass. It will include a Chevron gas station, seen at left, as well as a separate area for large trucks to obtain fuel. Plans call for the facility to be open on Jan. 1, 2018.

Construction of the new $10 million travel center at Railroad Pass is progressing and is expected to be completed in time to open at the start of the new year.

Joe DeSimone, owner of the casino-hotel northwest of Boulder City, said tanks are in the ground, the canopies are up and the convenience store is halfway done.

“We’re moving as fast as the highway will allow us,” DeSimone said. “As long as (the Nevada Department of Transportation) remains on schedule, we will open by Jan. 1.”

Work is progressing rapidly, though not as fast as it could. Completion of the center, being built on 16 acres south of the casino, has been delayed about three months. When construction began in late January, DeSimone expected it to be complete and open by September.

Despite the delays, DeSimone said NDOT officials have been extremely helpful and kept him notified of any changes or issues.

They also made accommodations for the casino’s customers from Boulder City, creating an access road that allows them to turn left from the property for an easier return home, DeSimone said, adding that was essential for them.

“People from Boulder City are our lifeline. There are more people coming home to Boulder City than to here from Henderson,” he said.

Another challenge is the lack of maps of the site, he said. They have encountered a few things that have slightly delayed construction, including a major connector for Cox Communications that provides internet service to the Boulder City area.

As work on the center continues, DeSimone is already making plans to expand the hotel. He is working with an architect and the city of Henderson to build a second tower featuring 220 rooms.

“We are in the planning stages,” he said.

The tower will be east of the existing tower across from the small parking area and will connect via a bridge over the main entrance.

DeSimone said that once the travel center opens, he should be able to determine the need for the additional hotel rooms fairly quickly.

“With the studies we have done, we are anticipating success right away,” he added. Currently, roughly 75 to 100 people are working on the construction of the travel center and truck stop, DeSimone said.

DeSimone said he expects to hire about 15 to 20 people for the travel center and expects to start staffing the facility in the coming days.

“I would love to hire local people,” he said.

The new facility will include a Chevron gas station with 20 pumps, a nonbranded fueling center for trucks with seven pumps, propane sales, a clean-out station for recreational vehicles and a truck scale.

DeSimone said he is especially pleased about the partnership with Tesla because it means the charging stations will show up on the auto manufacturer’s national map.

The travel center itself will measure 8,500 square feet and include showers and a lounge for truckers, an expanded convenience store, a Capriotti’s Sandwich Shop, “clean, nice bathrooms” and 15 slot machines, as long as they received approval from the Nevada Gaming Commission in November.

“We used a lot of observation and talked to truckers who stop here regularly,” said Joe Wilcock, the property’s new general manager, of how the leadership determined the best features for the truck stop.

There are also plans for an as-of-now-unnamed fast food restaurant.

“There are not many casino/truck stop combinations in the country,” he said.

Though they will be located on the same property and have the same owner, the two entities will have their own identities, including separate websites, Wilcock said.

However, there will be some connections.

Wilcock said owning the truck stop and travel center will allow for some special promotions for their casino regulars, such as “free gas at the Pass.”

Once the Nevada Department of Transportation is finished with its portion of Interstate 11, the land it is currently using for U.S. Highway 93/95 will be returned to the casino.

Tony Illia, spokesman for NDOT, said he was told by the project manager early Wednesday morning that the road in front of Railroad Pass will be vacated by Jan. 1, with completion of the first phase of I-11 on track for the end of December or early January at the latest.

DeSimone estimates it will take four or five weeks to transform the former highway into a parking lot. Preliminary work has already been done, and there are big piles of fill in place to level the surface, he said.

There will be parking for about 100 trucks and 30 recreational vehicles in addition to an expanded parking lot for cars.

Also included in the project is a separate parking area and access to the River Mountains Loop Trail.