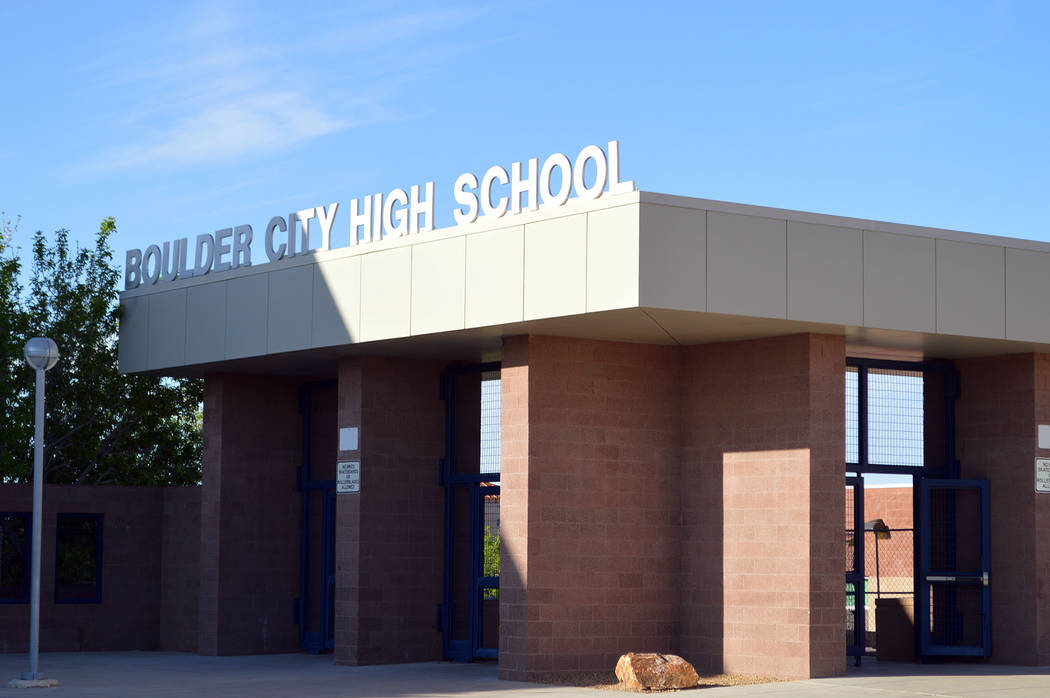 Hasty budget decisions by a newly created advisory team might leave Boulder City High School without an art program. Instead team members decided to salvage an administrative position as the school continues to deal with problem students.

The school organizational team voted Feb. 1 to eliminate three teaching positions, including the school’s sole art teacher, based on enrollment projections for the 2017-2018 school year.

“This year’s budget represents additional challenges as we needed to eliminate three positions from our budget,” said Principal Amy Wagner. “My overall priority is to foster a safe and respectful learning environment for our students and staff, which is a part of our school belief statement, school improvement goals and district pledge of achievement.”

At the March 15 school organizational team meeting, school counselor Rebecca Balistere shared some insight on why safety is important at BCHS.

“I think there are dirty little secrets going on in this town that nobody wants to talk about … There are very unsafe things that go on here that no knows about except for my office,” she said.

According to her, there have been several homicidal kids on campus in the past two years, as well as kids with ankle monitors and kids who had been pushed into sex trafficking by their parents.

“No class matters if kids are unsafe on campus,” she said. “Many unsafe people come on this campus.”

The team members also felt that they were not prepared to make the decision between an administrator and the art department.

School organizational team Chairman William Strachan added it to the meeting’s agenda because he felt it needed more discussion.

“I felt we had made decisions without enough information, and that the whole process had been rushed,” he said.

The approved plan, however, might not be final, and the team submitted an appeal to School Associate Superintendent Jefferey Hybarger.

Team Vice Chairman Christopher Bires said that according to Section 24 of the adopted regulation R142-16, before the team can approve the plan, the school principal needs to present it to the public.

“The motion for approval was made and approved at the Feb. 1 meeting,” said member Jason Howard.

“But you can’t approve it then because it was never presented to the public,” Bires responded. “ … Any approval was invalid because this plan was not followed … No strategic budget or action was taken after the presentation on Feb. 22.”

Wagner said that the vote was due Feb. 1, and she had given the timeline of approval to the assistant superintendent, who said it could be approved the same day as it was due.

“We want to keep more kids here,” said member Andrew Huxford. “Removing art would allow more kids to go over the hill. I support the arts and want them at our school.”

By surplusing the art department, BCHS students would lose five elective classes, which could put more stress on other elective programs.

“The impact of losing art and another teacher is greater than losing a third administrator … I strongly advise (we) revisit the budget, revisit the plan, and don’t eliminate three teaching positions,” Bires said.

“Does anybody want a program to go? Absolutely not,” said member Jennifer Solorio. “Every single year something has happened, but this year is the first everyone has seen it.”

The reason for eliminating the art department is purely a numbers one, Wagner said. “It’s not that we don’t like something and decided to drop it off.”

If the school’s enrollment grows to 590 or larger, the eliminated positions would be reinstated, but art classes would not be offered in the fall. Wagner did say it would be the first position brought back if the enrollment increased. The current school enrollment projection is 587.

The other two eliminated teaching positions are in the math and science departments and will be covered with people who were already planning to leave. Neither will cause programs or classes to be eliminated.

School organizational teams are new to the Clark County School District. Each comprises parents, teachers, support staff, students and community members who are responsible for assisting and advising the school’s principal in developing the school’s plan of operation, which includes the budget.

The high school’s organizational team was formed at the end of 2016 and held its first meeting Jan. 1. Its voting members are Bires, Howard, Huxford, Solario, Strachan and Sherri Jorgensen. Lauren Stewart is the school’s student representative, and Wagner is also on it, but both are nonvoting positions.

During the March 15 meeting, a BCHS parent expressed concern about eliminating the art department.

Jenifer Jeffries said she was concerned about the 134 incoming freshmen from Garrett Junior High School and whether they would still attend school in Boulder City if the art program was eliminated.

“BCHS just built a new school with expensive art tables and equipment. It does not make sense to let that go to waste … Besides the outlet for young artists that will be lost, the art classes provide an opportunity for students of all ages and abilities to collaborate and learn from each other, ” she said in a letter she sent to the team members for the meeting. “This opportunity is mutually beneficial for both AP/Honor students and those who are in the self-contained classroom, allowing students to learn empathy and how to relate to students they may not encounter in their math, science and English classes.”

If an appeal is granted, the team plans to recommend eliminating the school librarian position and keeping the art teacher.

Jorgensen suggested eliminating the librarian position rather than the art department.

According to Wagner, if that happened, the library would be closed and additional support staff would need to be hired.

“As this is an initial budget, I am hopeful that teaching positions will be restored after student count day,” said Wagner. “Students will still have opportunities to participate in performing and fine art classes and other electives on our campus, such as band, choir, drama, technical theater, animation, guitar, photography, broadcasting, business, marketing, film studies, automotive, music appreciation, Spanish and weight training.”

After the meeting, several team members explained the reasoning behind their votes.

“I have faith in our elected State Legislature and Senate representatives that they will find a way in the 2017 Legislative session to direct more education funding toward our rural schools, specifically Boulder City High School, so our students at BCHS will enjoy the same benefits and resources larger high schools in CCSD enjoy in the coming school year(s),” said Howard in an email. “There is still plenty of time for funding to be figured out. I hope that the students and their parents, families and friends will talk to their elected representatives in the coming weeks and months to help get the funding we need.”

The team scheduled a tentative meeting for 5 p.m. March 28 should the appeal be approved.