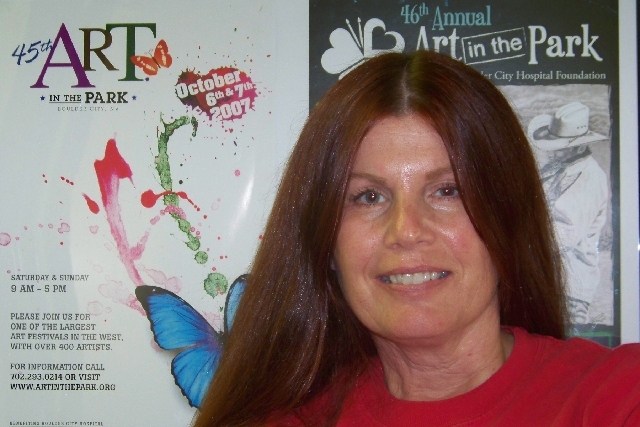 Kirsten C. Ashley is Boulder City Hospital Foundation’s person in charge of recruiting 300 volunteers for the 51st Art in the Park, but so far it has been slow going.

About six weeks ago, Ashley, a self-described “Jersey girl” was hired by the Boulder City Hospital Foundation’s community events manager Wendy Adams to take on the job of volunteer coordinator after the two had met at this year’s Spring Jam where Ashley was a volunteer.

They immediately “fell in love with Art in the Park” in 2009, Ashley said, and both wanted to do whatever they could to be part of this annual arts and crafts event that benefits Boulder City Hospital.

Although the husband and wife team had a tradition of participating in volunteer activities, Art in the Park, which is Oct. 5-6 this year, is more than that to both of them.

Not long ago, Ashley, who “started planning her escape” from the Garden State while still in kindergarten, took her husband to Boulder City Hospital after he had been misdiagnosed “at a major hospital in Las Vegas.” Today her husband is healthy and the two have become true supporters of the hospital.

Ashley is hoping to get people excited about volunteering for Art in the Park, and she said she would do whatever it takes to get folks’ attention to reach that magic volunteer number of 300.

Volunteers are needed at the registration area, to work at the raffle booth, to work the information area and to help with cleanup after the event.

Many of the volunteer jobs can be done without much physical activity, such as “booth sitting” an artist’s space while they take a break or volunteering at the information or raffle booths.

Volunteers can choose to work a four-hour or eight-hour shift on one or both days of Art in the Park.

Ashley described her call for volunteers as “lackluster” thus far, and said she is getting a little nervous about reaching the 300 volunteer goal.

Having volunteered at Spring Jam where she was impressed with the community “warmth” she experienced, she is a bit discouraged with the lack of volunteers to date.

But that’s not keeping Ashley from engaging folks and working after hours to secure the needed volunteers for this year’s event. She’s confident folks will step up and make this year’s Art in the Park a successful event.

“Boulder City is all about community,” Ashley said. She paused because she was beginning to cry. “You don’t get that in Las Vegas …”

The Boulder City Hospital Foundation, which produces Art in the Park, is a nonprofit organization established in 1995 with the purpose of raising funds for equipment and improvements for the hospital. The foundation office is in the 999 Adams Blvd. medical building in front of the hospital. Office hours are 8:30 a.m. to 4:30 p.m., Monday through Friday.