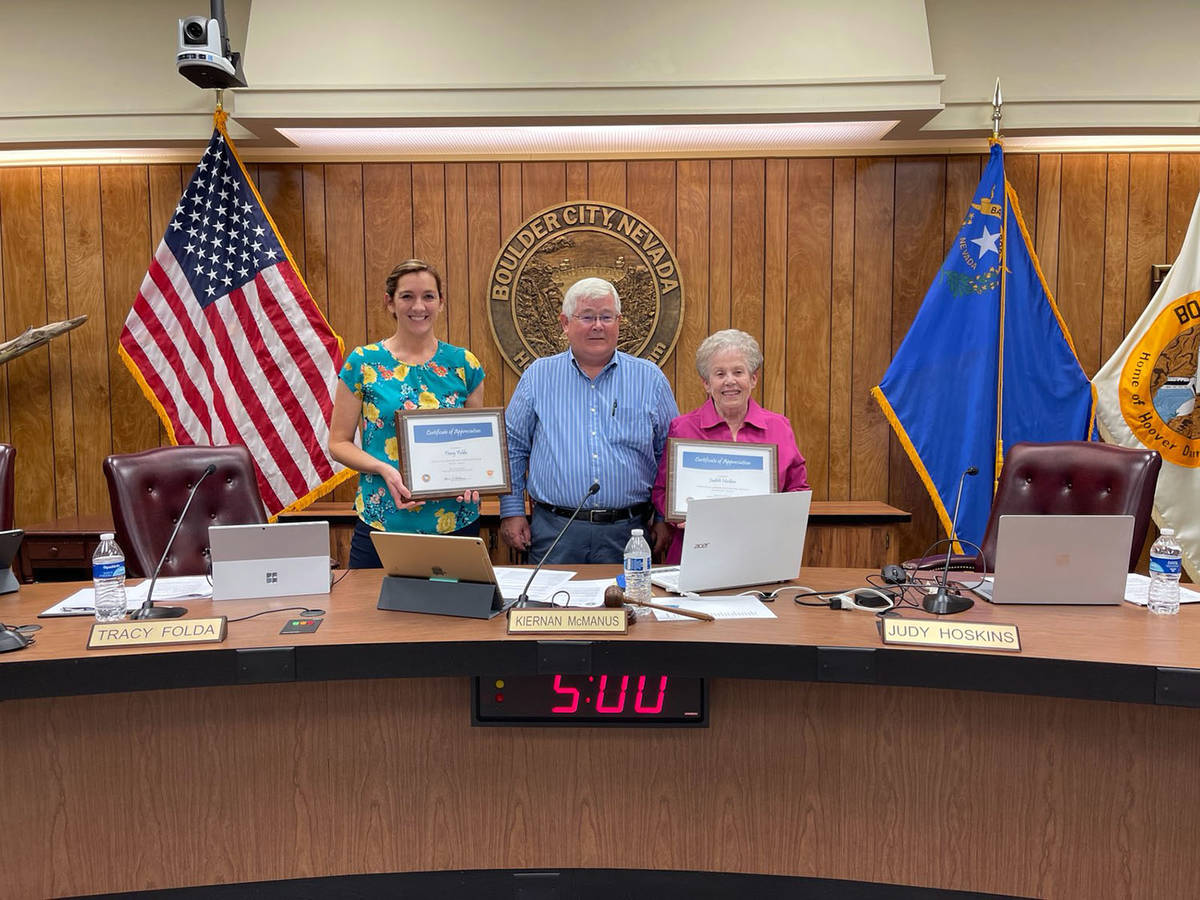 Boulder City Outgoing Councilwomen Tracy Folda, left, and Judy Hoskins, right, were recognized by Mayor Kiernan McManus for their service on council at their last regular meeting Tuesday, June 22. Hoskins ran in the recent municipal election but did not make it past the primary, and Folda did not run as she is moving out of state.

At its meeting Tuesday, June 22, City Council approved three resolutions for the project with a 4-1 vote for each.

Mayor Kiernan McManus gave the dissenting votes and said he believed there are better ways to improve airport safety than installing a tower.

“I believe this continues to be the wrong solution for the Boulder City Municipal Airport. … I’m also extremely concerned about the direction the airport takes with the regard to Boulder City as a community,” he said.

In April 2018, the airport was approved to participate in the Federal Aviation Administration’s control tower program, meaning it could install an air traffic control tower. One was also included in the airport’s master plan update approved by council in 2018.

The approved resolutions allow Kimley-Horn and Associates Inc. to do a site study and environmental assessment for the tower. A site evaluation, selection review and a safety risk management review for four potential sites of the tower will be completed.

Councilwoman Tracy Folda asked how the contractor was going to decide on the location of the tower at the airport.

Airport Manager Marissa Adou said they and the FAA would be researching four possibilities from a preliminary study. They would also research other locations should none of those be feasible.

The environmental assessment will include a study of the air quality, biological resources, climate, hazardous materials, land use, natural resources, energy supply, noise and compatible land use, socioeconomics and water resources as well as the historical, architectural and cultural resources at the airport.

“What is the time length we’re looking for … for the research being done?” asked Councilman James Howard Adams.

Adou said they anticipate them being done by the end of the year.

“I have been a supporter of this idea since it was originally presented. … I continue my positive perspective on the … building of this air traffic control tower,” added Bridges.

According to the contract, a public workshop will be held when a draft environmental assessment report has been completed.

“As someone who has been in the aviation industry my whole life … what I find troubling about the decision making is that it has never been presented to the users of the airport,” he said.

In December 2020, then Airport Manager Willy Williamson said the airport had “well over 100,000” airport operations annually. He said in his first four months on the job he had seen five near mid-air collisions between aircraft and a control tower would help prevent them.

The estimate for the proposed tower is $700,000, which would be spent in fiscal year 2022, according to the draft capital improvement plan. The Federal Aviation Administration would provide $656,250 and the city would be responsible for $43,750.

Tuesday was also the last meeting for Hoskins and Folda as members. McManus recognized them for their service.

“Both of these individuals, I believe, have the highest integrity and certainly their service on this council has been dedicated to one and only one thing, and that’s what they believe is best for Boulder City,” he said.

Bridges and Adams also thanked them for their service.