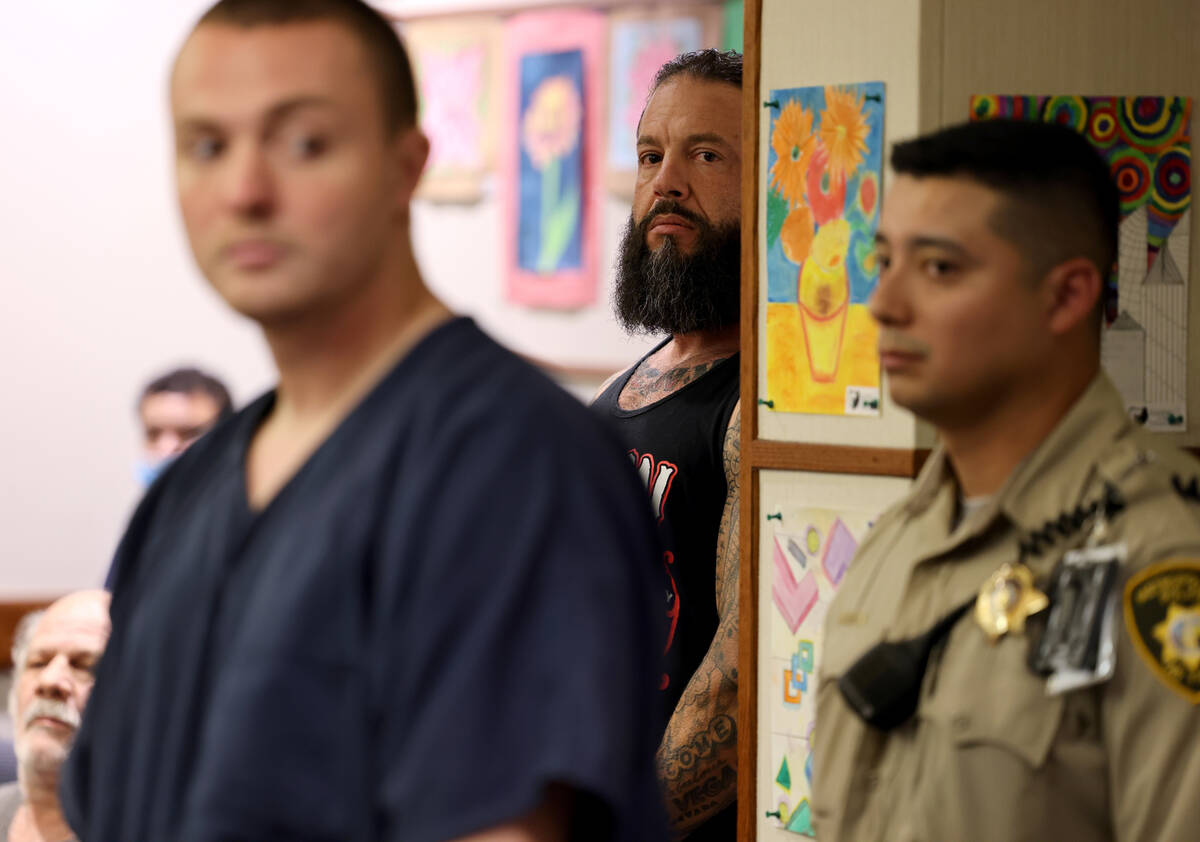 (K.M. Cannon/Las Vegas Review-Journal) Russell Smith, 26, left and Stephen Alo, 46, center hiding behind a pillar, are seen during their initial court appearance in Henderson Justice Court on Thursday, June 2, 2022. Both have been indicted on more than 35 felony counts after a shooting between Hells Angels and rival Vagos bikers May 29 on Interstate 11/U.S. Highway 95, according to police.

Three members of the Hells Angels were indicted Friday, June 10, on more than 35 felony charges in connection with a shooting on a Las Vegas Valley highway that targeted members of the Vagos Motorcycle Club.

Richard Devries, 66, who authorities said is the president of the Las Vegas chapter of the Hells Angels, was arrested with two Hells Angels prospects — Russell Smith, 26, and Stephen Alo, 46 — in connection with the shooting targeting the rival motorcyclists on Interstate 11/U.S. Highway 95 late last month. A grand jury returned an indictment Friday, June 10, charging the men with conspiracy to commit murder, five counts of attempted murder with a deadly weapon, five counts of battery with a deadly weapon, and 25 counts of discharging a firearm at or into an occupied vehicle.

The men were initially charged with 19 felonies in Henderson Justice Court, according to online court records.

Each count of discharging a firearm came from a cartridge case found at the scene following the shooting May 29, prosecutor Michael Dickerson said.

“The investigation is not over, and it’s going to continue until we track down all evidence that’s currently out there,” Dickerson said.

As of Wednesday morning, all three remained in custody at Clark County Detention Center.

Last week, Devries challenged the bail set by Gibson, and his co-defendants have since filed a motion to join the petition in District Court, court records show. Devries’ lawyer, Richard Schonfeld, has said officials have not shown evidence that Devries had a weapon or fired during the shooting.

Chio has said the shooting, which injured six Vagos bikers, may have been an act of retaliation after a Hells Angels member was killed in April during a shooting at a San Bernardino bar.

The same Hells Angels then “began to cause problems” with the Vagos group at the Southern Nevada Veterans Memorial Cemetery, the report said.

Later that day, Hells Angels riders pulled up next to a group of Vagos members riding north on Interstate 11/U.S. Highway 95 near Wagon Wheel Drive. According to the report, some Hells Angels riders tried to kick a Vagos biker over, and one Hells Angel member “stood up on their motorcycle and started shooting.”

Stray bullets were shot across the freeway, prosecutors said, and one struck a car parked in front of a church.

A seventh person who arrived at a local hospital after the shooting was also injured. Chio has said that person was a Hells Angels member.