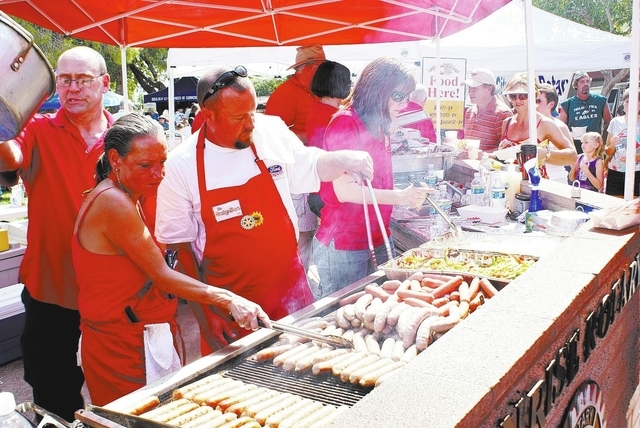 For the hungry, grilled bratwurst, hot dogs and Italian sausages will be sold all day, prepared by Rotarians and other volunteers. For the thirsty, margaritas and beer will be served in a beer garden.

“This will be the first sausage party that I am looking forward to attending,” said Same Sex Mary singer James Adams. “Wurstfest is the best fest.”

Additionally, the event will feature a free car show with cars of various eras, and a free bouncy house and other entertainment for children.

The first Wurstfest raised about $2,500 for a senior party to be held in the L.A. Water and Power building. But now the event can make up to $80,000, sending seniors on buses to party with their friends at places like the Adventuredome Theme Park at Circus Circus, or even Disneyland.

In addition to the trip, a car used to be raffled off to a lucky senior. But now raffle winners are given cash.

The party began as a way to give seniors a safe alternative to the desert and house parties popular during grad night, Sunrise Rotary past president/board member Rich Baughman said.

“Since we’ve been doing this, no one’s been injured or hurt,” he said.

The festival has grown over the years and now raises more than is needed for the party, which last year cost about $30,000, organizers say.

The additional funds are distributed among a variety of charities in Boulder City and Southern Nevada, as well as an orphanage in Mexico and a school in Africa, organizers say.

“We can make enough money in one day to cover all the charities we support all year,” Baughman said.

The majority of the money spent on graduation night comes from Wurstfest’s live auction, which in the past has included automobiles, a trip to Mexico, Grand Canyon helicopter tours, dental work, and more.

Baughman, an auctioneer, said the auction is a “fun auction,” where the auctioneers dress in different outfits every year.

Past costumes have found Boughman and another auctioneer dressed as the Blues Brothers, pharaohs, cowboys, and wearing zoot suits.

“Every year is a surprise, and a lot of people come just to see what we’re going to be dressed as,” he said.

A silent auction is scheduled between 1 and 3 p.m. and will include jewelry, art, a treadmill, televisions, patio furniture and other items.

“It’s a family event, and we really try to promote that,” Baughman said.

Reporter Jack Johnson can be reached at jjohnson@bouldercityreview or 702-586-9401.