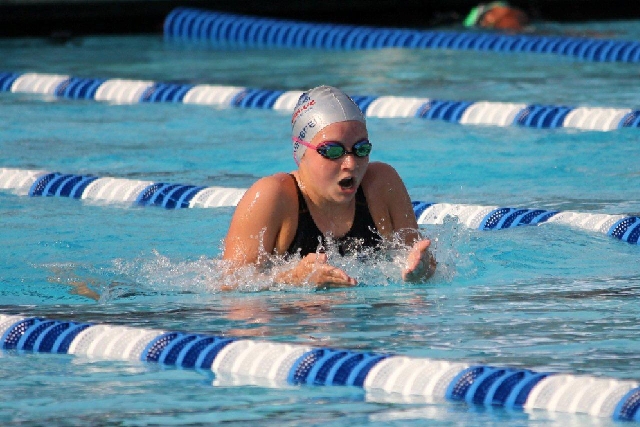 The Boulder City-Henderson Heatwave swim team finished second out of 28 teams in its first major meet of the summer over the weekend, and had several excellent performances from Boulder City swimmers.

The Novaquatics June Age Group Championships June 27-30 in Irvine, Calif., took place at the William Woollett Jr. Aquatics Center. The Heatwave competed against the best in age-group swimming from the Southern California region.

Gebhart was also part of the 200 freestyle team.

Braden swam on the 400 medley relay team that finished fourth.

Braden, age 18, won the 50 freestyle individual, but he failed to qualify for the championship final in the 100 freestyle and 100 breaststroke, finishing ninth in both.

The 17-year-old grabbed second in the 100 fly, third in the 50 and 200 freestyle, and fourth in the 100 freestyle. Gebhart was also part of the 400 medley relay that finished second.

The 16-year-old Sauerbrei, who also grabbed seventh in the 200 individual medley, lives in Henderson but attends high school here.

Other Boulder City boys competing in the meet were 17-year-old Evan Klouse, who helped grab fourth in the 200 freestyle relay and eighth in the 200 medley relay, and 10-year-old Joseph Purdy.

Purdy, who competed in five individual events, saw his best finishes on relay teams. Purdy swam the second leg of the second-place 200 freestyle relay in the 7-10 age group, and the butterfly leg of the third-place 200 medley relay team.

Other younger local boys that competed were Max Vanderford, 9, in the 100 backstroke and 200 freestyle relay; Elijah Wyett, 9, who swam in six individual events and two relays; and Mason Romantic in three individual events.

While nine male swimmers made the trip from Boulder City, 11 local girls traveled to Irvine.

Hubel was joined on all four relay teams by locals Cori Molisee, 17, and Rachael Grothe, 17.

Individually, Molisee competed in five events. She was second in 400 freestyle, and fifth in the 50 and 100 freestyle. Grothe won the 100 butterfly. That was her top finish in four individual events.

Jessica Purdy, 16, grabbed fourth in the 200 butterfly for her top finish in three individual events. She swam three relay events, including a fifth-place finish for the 800 freestyle relay team.

Mandy Gebhart, 14, saw her best finish swimming the third leg of the 200 freestyle relay, finishing third in the 13-14 division. She also competed in six individual and three other relay events.

The Heatwave will send its seniors and national-level swimmers to the Los Angeles Invitational on Friday through Sunday.