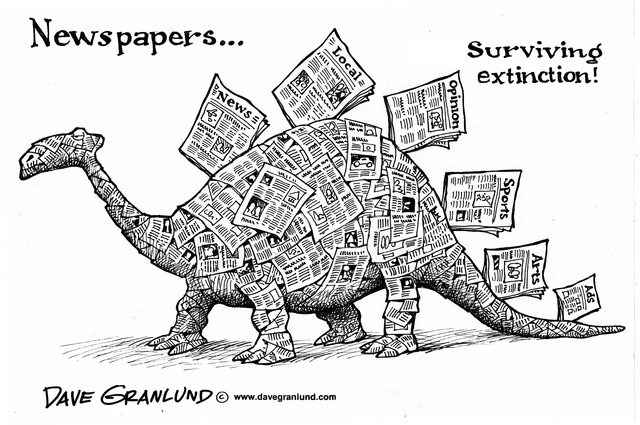 Years ago, long before I wrote my first story for a newspaper, I wanted to become a paleontologist. Like many children, I was fascinated with dinosaurs and wanted to learn all I could about them.

However, it didn’t take me too long to figure out that jobs for paleontologists were few and far between. At the time, being a newspaper reporter was a better option. It was the heyday for reporters, coming on the heels of the Watergate scandal. And with a name like Bernstein, it seemed like a natural.

I never imagined that being part of a newspaper could also make me a paleontologist, holding on to the past.

There have been rumblings for years about how newspapers will become extinct. I hope that’s something I never experience.

Granted there have been many changes, reduced readership, fewer ads and lots of newspaper reporters and editors put out of work.

Large, metropolitan papers are struggling. No one can deny that. And the future of smaller papers is rocky, too.

But we are holding on — for now.

This week is National Newspaper Week, a time to honor the important role newspapers play in our community.

More than just something to wrap dishes in when moving or to line the bottom of a bird cage, newspapers are the lifeblood of every city where they are published.

Community newspapers, such as the Boulder City Review, play a major part in their respective communities. They inform residents about what is going on in the cities they live in.

They enlighten people about subjects they might otherwise never hear about, and offer thought-provoking commentary about important issues.

They are the heart and soul of communities. They help connect residents. They share stories about the people who make each town a special place to live.

And sometimes, they tell the difficult stories, or keep an eye on the politicians to make sure they are doing their jobs.

For newspapers not to go the way of the dinosaur it is important for the communities to support them, as well. That means reading, subscribing and advertising.

Working for a newspaper has taken me on many adventures, most of which I have shared with people I have never met but am connected to through these pages.

This spirit of camaraderie is what will help newspapers survive. They are our past as well as our future. It’s a new adventure I’m eager to take. Won’t you join me?