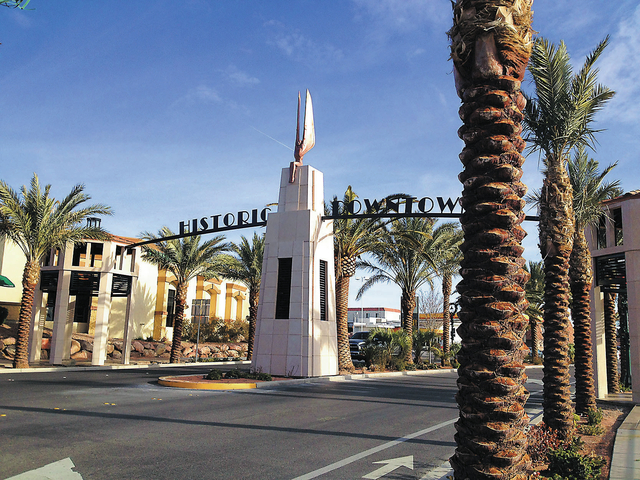 No matter how you say it, the result is the same. The final piece of the Nevada Way project has been put into place.

Many who were inconvenienced by the project will breathe a sigh of relief. As will the city staff that worked diligently behind the scenes for more than two years. It took a lot of effort from a lot of people to get the job done.

The project included major utility upgrades, landscaping and paving, with the entry arch over Nevada Way as the grand finale. It makes me smile every time I drive under it on my way to work.

Glass-reinforced concrete panels were installed over steel framework giving the archway the appearance of stone and resembling the intake towers at Hoover Dam. The final piece, a replica of the dam’s Winged Figures of the Republic, was put into place late in the evening on Dec. 30, according to City Manager David Fraser.

Scott Hansen, director of public works for the city, said he hopes the beautiful streets, art, plants and pedestrian friendly sidewalks entice people to visit and patronize area businesses. This will be especially crucial once the Interstate 11 bypass is in place.

“Nevada Way is part of our image — our brand,” he said.

The $1.4 million project was funded through the city’s redevelopment agency. Hansen said former City Manager Vicki Mayes helped initiate the beautification and revitalization effort, wanting more to be done with the funds to help rebuild the community.

The archway itself cost the city $400,000. It appears to be money well-spent.

According to Hansen, to keep the project within budget, the city’s public works department acted as general contractor, overseeing the work of six or seven subcontractors, and used local companies whenever possible. It’s a sound business practice and not always easy to accomplish. But it saved the city more than $200,000.

Shane Cunningham of the public works department was key to this and ensured that everything went smoothly, Hansen said. Not only did Cunningham work throughout the day during regular business hours, he was often in the trenches — literally — at night helping solve problems that were bound to come up when dealing with decades-old utility lines.

But the project did more than just make downtown Boulder City more beautiful. Hansen said it made the main thoroughfare through town more functional, and is exactly what the Regional Transportation Commission of Southern Nevada was envisioning as it created a design guide for local streets, coincidentally coinciding with the construction process here.

“What we were doing is what they envision for the entire county,” Hansen said.

The plan is based on changing how people use roadways. For the better part of the past century, streets were designed to accommodate automobiles. But today, with more of a focus on improving people’s health and the air quality around them, streets need to offer a place for buses, bicycles and pedestrians.

And that is exactly what the Nevada Way project does. Sidewalks were widened so people can walk hand-in-hand. Landscapes were created to provide buffers from traffic and add greenery. Bike lanes were added, as were two turnouts for buses. The idea is to create alternatives to cars and make other modes of transportation more appealing, he said.

Everyone involved with the project — including the businesses and Boulder City residents inconvenienced by the construction — should be proud of what it represents and how it portrays the city to visitors.