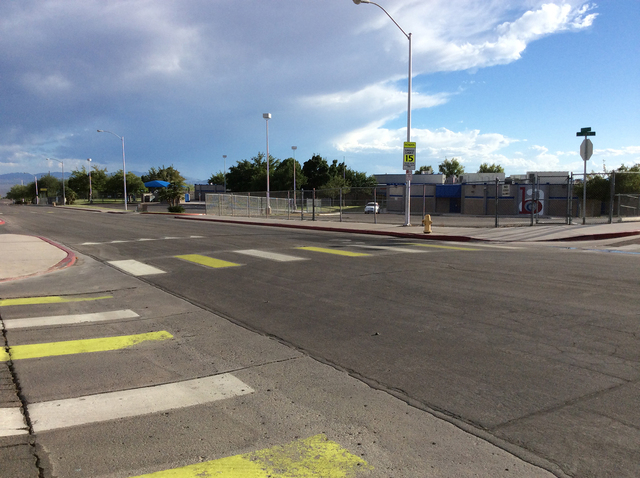 As Boulder City welcomes the start of the new school year, Police Chief Bill Conger is making sure drivers obey the laws so kids get to their classes unharmed.

Conger did not say how many extra officers would be on patrol during the first week of school, which starts Monday. But he said he planned to have a “significant amount” of enforcement while students and parents get back into the school-year routine.

The 15 mph speed limit in school zones was a problem for some drivers while he worked at the Metropolitan Police Department in Las Vegas. He saw kids get hit, and remembered one driver who was booked on a DUI charge while speeding through a school zone.

It’s why he’s so critical of speeders, stop-sign runners and distracted drivers who put children’s lives at risk. Luckily, he hasn’t seen many problems like that since he arrived in Boulder City last year.

“We’re a small community and everybody pretty much realizes that when school’s in, you gotta drive slow,” he said.

Conger told the City Council on Aug. 12 that he planned on putting “no U-turn” signs on Adams Boulevard at avenues B and G to prevent drivers from making U-turns in the crosswalk and potentially hitting children. But after reluctance from a few council members, and feedback from others, Conger tabled the idea for now to keep traffic flowing smoothly.

“I had some folks approach me and give me some more information about that, and the last thing I want to do is make the problem worse,” he said. “I normally gets two complaints per month about traffic tickets in school zones, but I could see us getting about 30 a day if we put in the ‘no U-turn’ signs.”

But Conger said the police will continue to monitor the streets to see whether something else can be done to decrease danger without causing traffic jams.

Councilman Cam Walker expressed concern about communication between the crossing guards and the police officers, and wanted to make sure everybody would be on the same page once school started.

“The community needs to know we’re doing everything on our part, and there should be a zero tolerance for drivers not obeying the laws to protect our children,” he said.

Conger addressed that issue and said the police department will hold a class for crossing guards Friday so they’re fully aware of what their responsibilities entail.

Walker is glad the two entities are working together. He said it’s up to the community to understand the crossing guards’ importance.

“They (drivers) need to obey the traffic laws and pay attention to that crossing guard, because they are the law enforcement for the intersection,” he said.

When it comes to drivers who speed through school zones, Conger said the risk isn’t worth trying to push the limit.

But Conger said distracted drivers are the biggest culprits when it comes to school zone infractions.