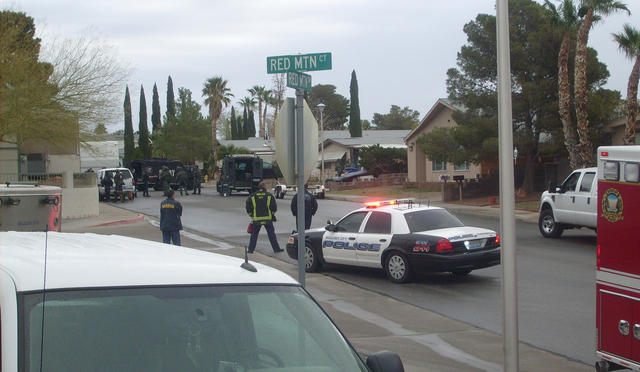 Four people were arrested last week after a search warrant was executed at a Boulder City residence where police say methamphetamine was sold.

Police said Shafer had sold methamphetamine to a confidential informant.

Shafer also was charged with five counts of possession of stolen property and possession of a dangerous weapon because items believed to be stolen from an off-duty police officer’s vehicle were found at the residence, police said.

Police found “a bunch of different equipment” including a riot shield, a vest, knives and bags containing citations and other items that were stolen from a Las Vegas Detention and Enforcement officer last year, Boulder City Police Detective Sgt. John Glenn.

Davis was booked into the detention center and is being held on $60,000 bail. Charges against him include the use of a controlled substance in the presence of a child, possession of a dangerous weapon, two counts of possession of stolen property and being a felon and failing to change his address.

Police said the minor-related charges against Shafer and Davis involved a teenage neighbor. However, a child lived at the residence and Child Protective Services responded to investigate the living conditions, police said.

Hudson was charged with possession of marijuana and obstructing a police officer; she was taken to Henderson Detention Center, where she posted bail.

Schneider also was charged with obstructing a police officer and taken to Henderson Detention Center, where she posted bail.

Shafer and Davis are scheduled to appear at 1 p.m. March 11 at Boulder Township Justice Court.