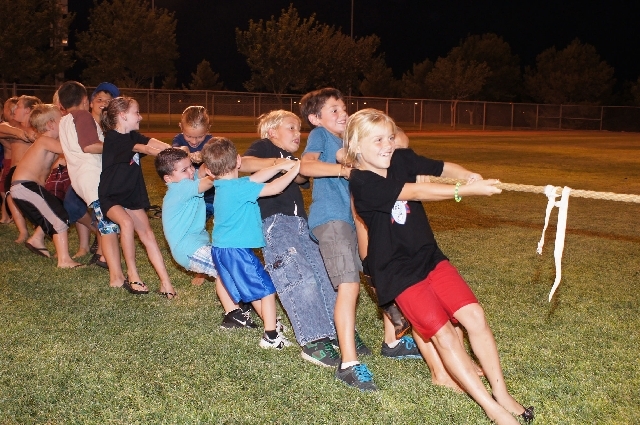 It’s that time of year again: The annual National Night Out hosted by the Boulder City Police Department will start at 6 p.m. Tuesday at the baseball fields at Veterans Memorial Park.

National Night Out is promoted by the National Association of Town Watch, and occurs across America. The association started National Night Out in an attempt to promote “crime prevention programs including neighborhood watch groups, law enforcement agencies, state and regional crime prevention associations, businesses, civic groups, and individuals devoted to safer communities.”

National Night Out started in 1984 and has since swept across the nation, and is an annual event in all 50 states, U.S. territories, Canada and military bases worldwide, involving more than 15,000 communities and 37 million volunteers, citizens and civil servants. The Boulder City Police Department will be participating and promises to offer entertainment for people of all ages.

The Boulder City Police Department will be hosting different events for all to enjoy. The mission of National Night Out in Boulder City is to promote community spirit and police-citizen partnerships in the fight for a safer community.

This is a wonderful time to meet and greet Boulder City’s police officers, detectives, firefighters and dispatchers. There will also be representatives from the Lake Mead National Recreation Area such as park rangers and members of the Lake Mead Fire and EMS crews. As a whole, it is a great opportunity to put a name to faces you see around town.

For the family, there will be a lot of informative fun and entertainment. The National Park Service in years past has brought out its response boats, and offered information regarding boating safety and the importance of life jackets. Mercy Air 7, an air ambulance most commonly known as “flight for life,” has been known to stop by and allow people to walk around and ask questions about what it does and how it’s involved with the community.

Sky divers have made jumps, offering an aerial spectacle and carrying the nation’s flag before the national anthem is sung. There are bounce houses and an inflatable obstacles course, rock climbing walls and more for the children of all ages to enjoy.

This has been a friendly and competitive game between the two departments. The past two years have gone in favor of the firefighters in red. However, it’s not hard to forget that just three years ago the Boulder City Police Department was running the show and “stealing” the game.

It should be a fun-filled atmosphere for all playing and in attendance.

Please come and join the Boulder City Police Department and the Boulder City Fire Department for another great National Night Out. Bring your family and friends, pull up a lawn chair, indulge in some free food and drinks and meet some of the people who help keep this town safe.

For more information about the National Association of Town Watch or National Night Out, I encourage you to visit www.natw.org.

For any other questions or comments, feel free to contact me at the firehouse at 293-9228.

Thanks, and we’ll see you at the park!