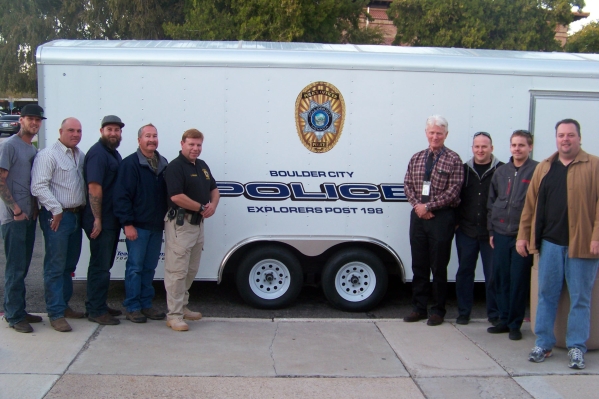 Advanced Vehicle Products donated a 25-foot trailer, affectionately called a “toy hauler” to the Police Explorers of Boulder City after noticing that the “really had a need, ” according to Gary Payne, manager of AVP.

The company’s gift is valued at approximately $20,000 and will replace an outdated, unusable trailer.

Payne said Advanced Vehicle Products, which builds and outfits police vehicles, had considered remodeling an old trailer, once used by the Explorers, but found it cost nearly the same to give them a brand-new one. The trailer will be used to transport the equipment and bicycles the Explorers use when traveling to competitive events throughout Clark County and elsewhere.

The Police Explorers are open to young men and women between the ages of 14 and 20, who get the opportunity to have “a window into the world of a police officer,” Pastore said.

They participate in special events as well as the day-to-day operations of the police department. They receive special training in areas such as traffic control, handcuffing, firearms safety (although they do not carry weapons), evidence/crime scene preservation, and arrest procedures.

— Rose Ann Miele is a journalist and was public information officer for Boulder City for nine years. She can be reached at roseannrab@hotmail.com or at 702-347-9924.

Swimming is one of life’s greatest activities. It offers health and fitness benefits, cools you off in the summer and can be gallons of fun. However, drowning is the second leading cause of unintentional, injury-related death for children ages 1-14, so make sure you stay safe in the water by being water smart.

Occupational therapy, which is being highlighted and celebrated this month, plays a vital role in providing services to residents in assisted-living facilities and nursing homes and is fast becoming a sought-after valuable service for those individuals choosing to age in place and maintain their independence. But occupational therapists work with people of all ages in a variety of settings including home, school and work.