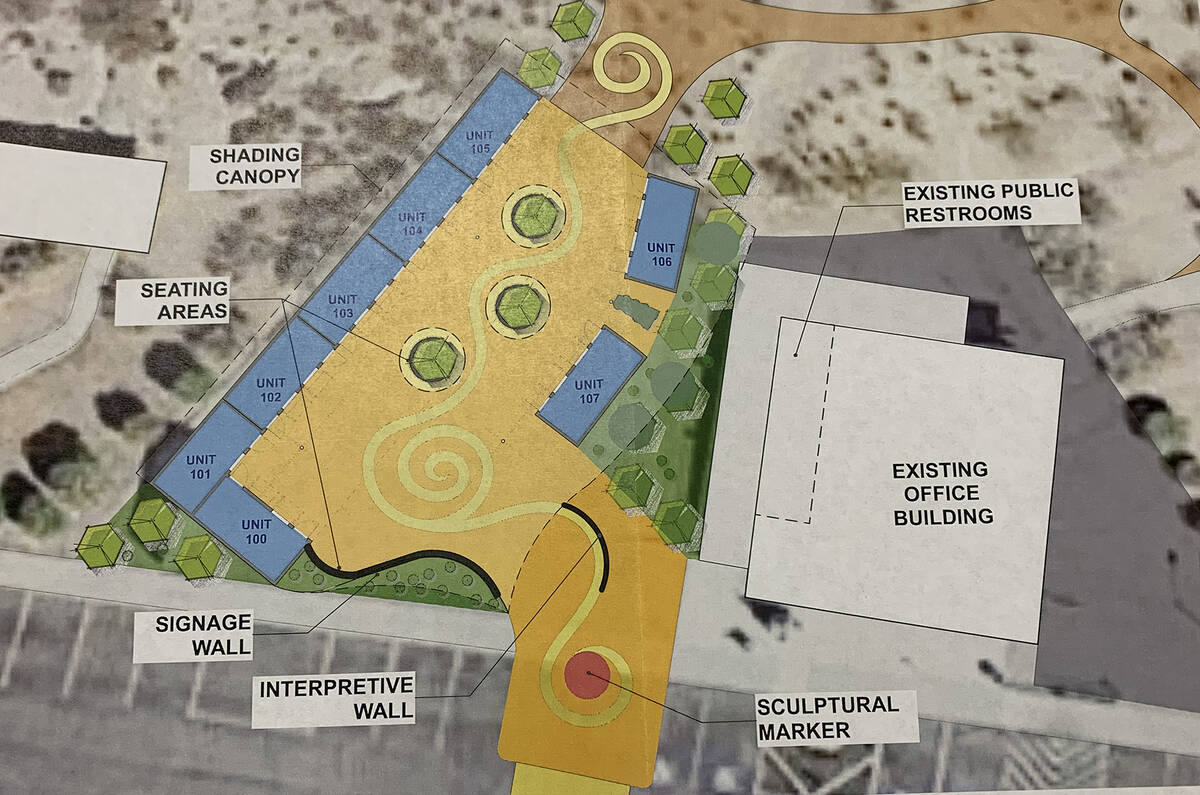 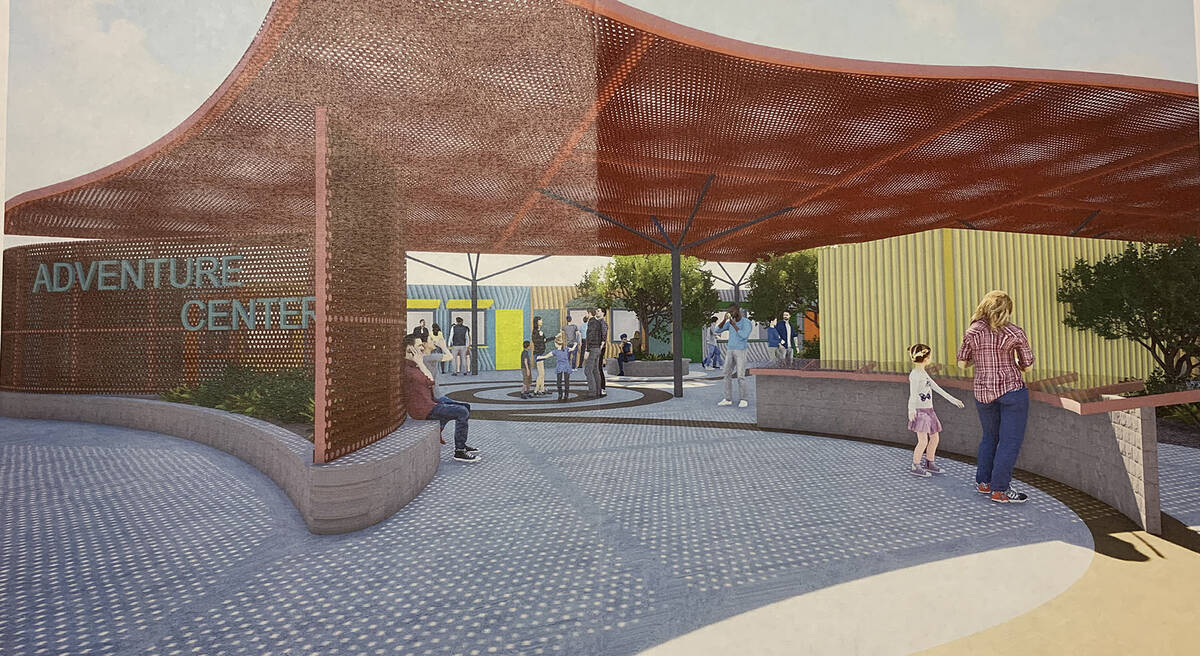 (Image courtesy Boulder City Chamber of Commerce) This proposed design for the Boulder City Adventure Center includes informational panels, seating and kiosks for tour operators. The U.S. Commerce Department recently announced a $3.7 million grant to the state to build a center in Boulder City and another in Carson City.

Jill Rowland-Lagan, CEO of the Boulder City Chamber of Commerce, confirmed that the adventure center will be built at the state welcome center at the corner of Nevada Way and Boulder City Parkway where the chamber is located.

“I’ve been talking about this for a long time,” she said.

National Park Express, a bus tour company, announced Friday, Sept. 23, it had received confirmation Sept. 20 from Secretary of Commerce Gina Raimondo and the Department of Tourism and Cultural Affairs that $2.2 million would be used for the Boulder City Adventure Center. The remainder of the funds will be used to build an adventure center in Carson City.

The centers will allow tourism companies to develop operations at a centralized location so that visitors can schedule various activities in one place. They also will be able to learn about other places to explore while visiting the area.

Rowland-Lagan said had been working on a way for the chamber to build the center for quite some time, but grants for the project were requiring her to provide a 20 percent match.

She said the Commerce Department was especially interested in the adventure center concept because it will create jobs and help diversify the tourism industry in Nevada. All of the participating tour operators will open second locations and hire additional staff to man their kiosks.

Plus, by having a central location and utilizing Boulder City Express to bring tourists from hotels on the Strip to Boulder City, the companies can reduce their carbon footprint, saving fuel, equipment and operating costs, she said.

It also may be used as a model for adventure centers in other states, Rowland-Lagan said, referring to a conversation she had with the Dennis Alvord, deputy director of the Economic Development Administration when she was in Washington, D.C., last week.

Now being coordinated by the state, the new adventure center will be built on the west side of the existing chamber of commerce office/welcome center and tie into the River Mountain Loop Trail. It will feature kiosks for tour company operators, informational panels, seating and shade structures.

The adventure center will serve as one of five planned stops in Boulder City for a circulator bus operated by National Park Express that will pick up and drop off passengers at places such as the historic downtown area, Hoover Dam and the Nevada State Railroad Museum, Rowland-Lagan said.

The bus was conducting trial runs in January and February of 2020, but had to cease operations due to the COVID-19 pandemic.

According to Rowland-Lagan, a majority of the plan for the adventure center was completed before applying for the grant. She already has letters of intent and support from companies that plan to operate kiosks at the adventure center, as well as a concept design for the Boulder City location.

The kiosks will be built out of retrofitted shipping containers with solar panels on top.

The proposed design incorporates a swirl pattern that ties into the area’s existing trails. Rowland-Lagan said plans call for a swirled trail on the hillside behind her office that will be accessible to those with disabilities and end at the proposed “Dark Skies Amphitheater.”

She said she would like to be able to offer demonstration areas for dark sky-friendly lighting as well as drought-tolerant landscaping.

Rowland-Lagan said she would like to add charging stations for electric vehicles and bicycles in the future.

“This big open space will now be utilized,” she said of the welcome center, which also features a picnic area, grills and restrooms.

Another aspect of the state project is creating a mobile welcome center unit that can be “dispatched to where the action is,” she said.

A timeline on construction is expected to be ready within a few months.