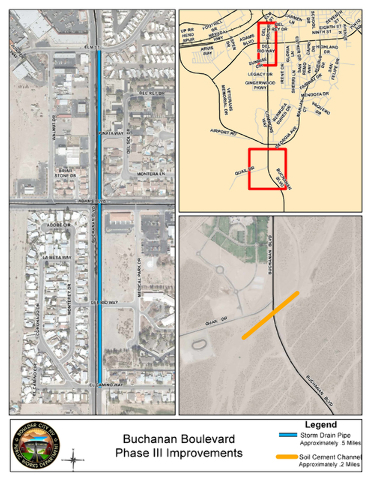 Construction on a nine-month flood control project along Buchanan Boulevard is set to break ground Monday.

The $4.5 million project will alleviate excess water along the busy street, and will consist of building a storm drain pipe and a soil cement channel, according to Public Works Director Scott Hansen.

Funding will be provided by the Clark County Regional Flood Control District. Meadow Valley Contractors will be the lead company on the project.

The Buchanan Boulevard project will be the second largest of its kind since the district began working with Boulder City, according to district spokesperson Kelsey Hand. The largest was the $4.6 million Hemenway Channel in 1990.

The project will mainly consist of an underground pipe that will transfer water on Buchanan from Elm Street to El Camino Way. Upgrades to the concrete channel along Buchanan will be included.

The project will be broken down into four phases, and construction hours will take place during daytime hours, Hansen said. It is expected to be completed by June.