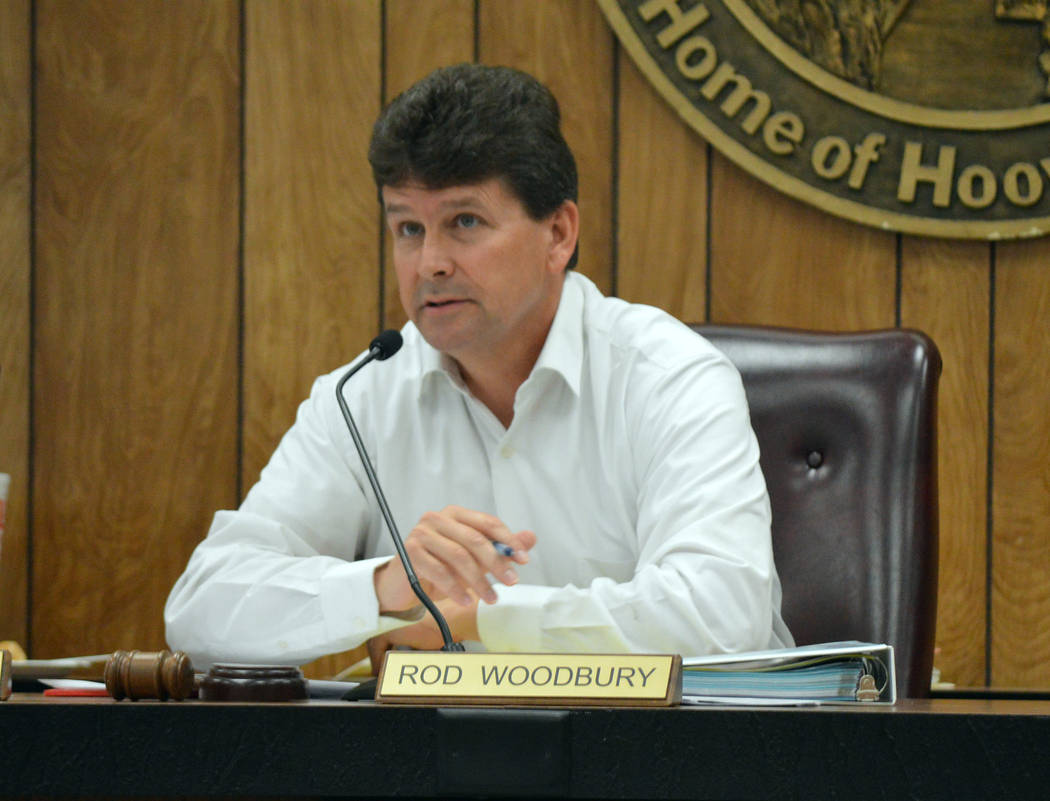 Celia Shortt Goodyear/Boulder City Review file photo During CBS’ Mondays with the Mayor’s segment on July 24, Boulder City Mayor Rod Woodbury was asked when the position would be filled.

An outside firm has officially been hired to find Boulder City’s new city manager, and the search is expected to take four to five months, according to the mayor.

Former City Manager David Fraser submitted his resignation at the end of May, and the council approved his separation agreement at its meeting on June 6. The agreement gave him a lump sum payment of seven months’ salary and benefits. According to Transparent Nevada, in 2016 he earned $215,835.78 in pay and benefits. Based on that salary, his severance amounts to approximately $126,000.

Fraser gave no reason why he submitted his resignation. He did not say what was discussed at a meeting with two council members right before he resigned.

During KLAS-TV, Channel 8’s Mondays with the Mayors segment on July 24, Boulder City Mayor Rod Woodbury was asked when the position would be filled.

“For the city manager position, we just hired Bob Murray & Associates, which is a well-respected company that’s a headhunter, to go out and do this thing for us, the search,” he said. “That’s estimated to take around (a) four to five months process.”

Bob Murray & Associates is a firm based in California but has local clients, as well as ones all over the country.

“Some of the local entities that they’ve recruited for include the city of North Las Vegas, Clark County, the Nevada State Contractors Board and McCarran Airport, as well as Northern Nevada entities like the city of Sparks, West Wendover, Washoe County and White Pine County,” Woodbury said.

According to Woodbury, Boulder City’s contract with Bob Murray & Associates is for $17,500, plus $7,500 for expenses.

Once the applications are received, the council will form a committee to narrow the field of applicants.

“When I spoke to the new council members before their first City Council meeting, both of them expressed a strong desire to engage an outside firm to conduct the recruitment process,” he said of why the city is having an external search done. “Also, when we later discussed it as a body, that was the general consensus of the City Council as well. Hiring a consultant to assist with the recruiting process makes a thorough nationwide search much more feasible.”

“We could probably do it internally, but not as easily as a consultant like Bob Murray & Associates who does it all the time,” he added. “Our staff is already spread too thin with day-to-day work, so that would have been a pretty big job to add to their plate.”

“Plus, expertise and objective neutrality are both important in a search of this nature, so hiring an outside professional eliminates any doubts that the recruitment might be biased or not comprehensive enough,” he said. “Of course, there’s always a trade-off, since hiring an outside specialist definitely costs more and usually translates into a longer recruitment process. Those are negatives that I would have preferred to avoid, but it was a trade-off that the City Council as a whole was willing to live with in this case.”

Woodbury also gave an update on the search for a new city attorney during the news segment.

Woodbury said the number of candidates for the open city attorney position has been narrowed from 11 candidates down to seven.

“The city attorney position is well on its way to being filled … They’re out for questionnaires right now, and they’ll be back within a week, and we hope to have interviews soon about that job,” he said.

Woodbury hopes the new city attorney would start by late August or early September but said it ultimately depends on how quickly the interview process goes, when it can be added to the City Council agenda, contract negotiations and when the candidate can begin.