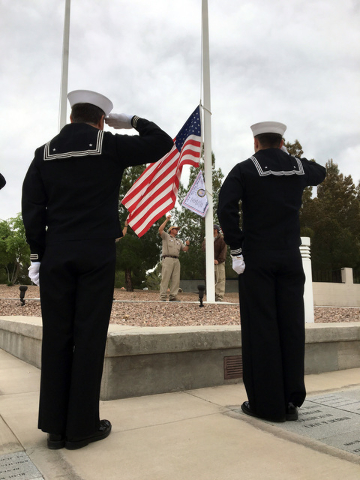 The USS Nevada, a ship that saw action during World War II, celebrated the 100th anniversary of its commissioning by having its flag raised Friday at the Southern Nevada Veterans Memorial Cemetery.

The ship’s flag was lifted to half-mast over the heads of three uniformed naval officers and cemetery staff at noon Friday, at the same time identical flags were being raised in Carson City on the State Capitol grounds and in Pearl Harbor, Hawaii.

Cemetery director Chris Naylor said the cemetery’s flags are flown at half-mast every day that veterans are buried there. After the last of nine funeral services ended Friday evening, the American flag was raised to full-mast and the USS Nevada flag was taken down to be framed and hung on a wall in the cemetery’s chapel or administration building, Naylor said.

“It’s wonderful we’re able to raise a flag in honor of the USS Nevada’s centennial,” Naylor said as light winds lifted and tugged at the flags flying overhead.

The naval officers stood at attention under a gray sky as the ship’s flag, with a crest bearing a gold trident and a silver state, was hoisted upward, just beneath the American flag.

“The two bolts represent the fast action of the entire crew,” the flag’s creator and Tribute Flight team leader, John Galloway, wrote in a statement about the flag’s history. A red atom with a circled number 2 “indicates the Nevada was subjected to two nuclear blasts, yet refused to sink.”

“The most seaworthy battleship in the history of America’s modern Navy Fleet” was commissioned March 11, 1916, and saw action during World War II at Pearl Harbor; Alaska; Normandy, France; and Iwo Jima and Okinawa, Japan, the Nevada Department of Veterans Services wrote in a release.

The first medal of honor of World War II was awarded to a USS Nevada crew member and the Navy named seven war ships after other members of the crew in recognition of their bravery and sacrifice, the release said.

The ship was decommissioned in August 1946. She was used as a fleet training target two years later and sunk in August 1948.