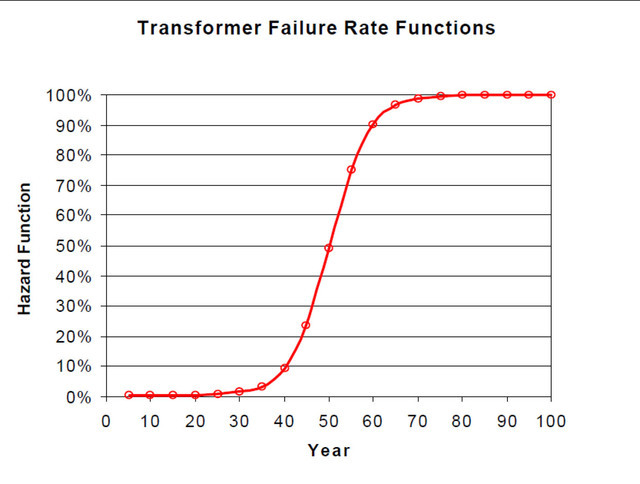 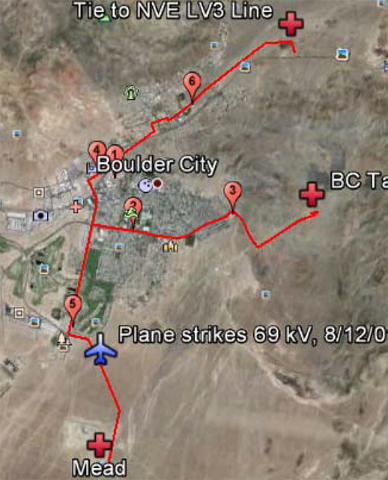 This map shows the locations of the six main substations in Boulder City. It would cost the $45 million to completely upgrade the city's electrical system. Courtesy of SAIC

The City Councils decision to increase utility rates in May was a move that angered many residents of Boulder City, but residents would be more angry if the citys electrical systems were plagued by constant power outages and expensive emergency replacements. A hypothetical situation that will assuredly be a reality if the city does not upgrade its drastically aging power grid.

Mayor Rod Woodbury said in an opinion piece for the Boulder City Review, that every day the city waits to raise rates the city is in even more danger of a mass electrical failure.

Kicking the can down the road or sweeping the issues under the carpet isnt the answer. If we do nothing, then the risk of system­wide failures, compromised safety, skyrocketing maintenance costs and even a bankrupt utility fund only gets worse, he wrote.

At this point it is not if something breaks, but when, Hansen said.

When city officials debated the necessity of rate increases one study was consistently mentioned in numerous workshops and council meetings.

In 2012, the city hired Science Applications International Corporation to conduct a report on the state of the citys power grid. SAICs study, which was one of the deciding factors for raising rates, concluded that the citys capital improvements to the electrical system have not kept up with depreciation over the last five to 10 years.

In short, SAIC was saying that the electric income currently received from residents would not give the city enough money to improve or repair the citys aging electrical grid.

Substations one and two are the oldest in the six station power grid, with both being over 50 years old. As far as investments go a substation can effectively work for up to 40 years; however, substation equipment such as circuit breakers and transformers become increasing less reliable, almost to the point of guaranteed failure past the 50-year mark, according to the 2012 SAIC report.

For example, substation ones circuit breakers are so old that the business that made them no longer exist and spare parts are unavailable, thereport stated.

Based on that same report, the chances of a circuit breaker working successfully after 50 years is 18 percent. By the time those same breakers reach 60 years they will have a 5 percent success rate.

Substation two needs two 54-year-old transformers replaced and much like circuit breakers, a transformer does not function well after its 50th birthday.

A 50-year-old transformer has a 50 percent rate of failure and by 60 years that same transformer will have a failure rate of 90 percent.

The citys electrical income breaks even with its current operation cost. However, the current rates are unable to cover major upgrades or repairs if something were to become completely inoperable. According to the SAIC report, the city would need more than $6 million to make the repairs necessary to keep the electrical grid working on a basic level.

However according to Woodbury, it would cost the city $45 million to completely replace and upgrade all of the citys electrical equipment. Its an amount that Woodbury said would barely make a dent with the current utility rates.

City officials are aware of the citys unreliable and potentially dangerous electrical infrastructure. It is one of the reasons City Council overwhelmingly voted to raise rates, despite a majority of residents at the council meeting being against rate hikes.

Hansen said the aging system could not be maintained without an increase and until those increases start in October the citys electrical grid is on borrowed time. Despite limited funding, officials are not sitting on their hands. The city is currently replacing old electrical meters with new ones so the city can more accurately gauge energy use per household.

We are trying to upgrade as many meters as we can, Hansen said. I know that will upset a lot of people because the old meters dont read as accurately so people pay less, but it is another way we are upgrading what we can.

Hansen said the city has a number of long-term projects to improve electrical systems, but the city will not have the money until the new rates kick in.

It is like we want to buy a new car, but we need to save up, Hansen said. Until we have the money we have to drive in the old car. The city agreed to increase rates for residential users by 16 percent in 2017 and 5 percent increases in 2018 and 2020.