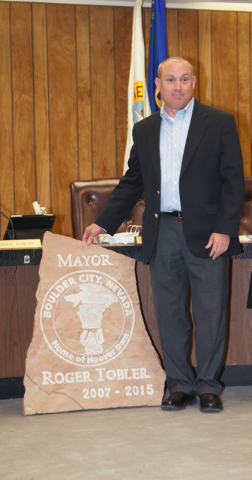 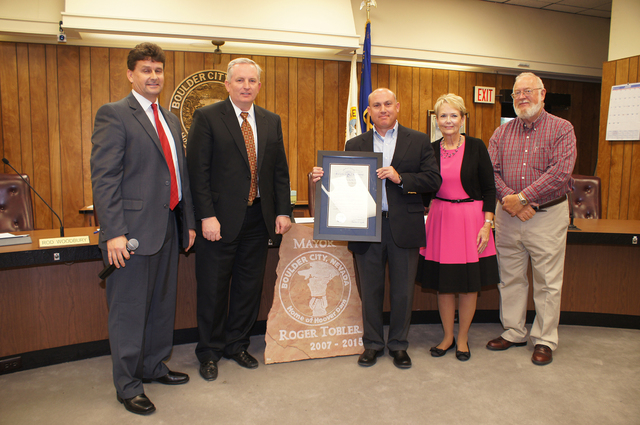 The council, after some confusion, also approved an amendment to a contract between the city and solar company Korea Western Power Co. Ltd. The amendment places vacant land leased to KOWEPO under the city’s name for tax purposes until the company finds clients to build on it.

Finally, the council approved three new members to the allotment committee, the volunteer body that reviews land parcels for allotment and makes recommendations to the Planning Commission.

The meeting kicked off with more than a dozen emotional tributes to the outgoing mayor from fellow council members, City Hall employees, businesspeople and residents.

Tobler was first elected to the council in 2003, then served as mayor from 2007 to now. His term expires this month and term limits prevent him from running again.

His time on the council spanned the rancor caused by financial losses from the city’s controversial investment in the Boulder Creek Golf Club. The dispute eventually led to a divisive, drawn-out lawsuit against leaders of voter initiatives to change city policies.

But leases signed with solar companies in 2012 allowed the city to pay off its debt years ahead of schedule and save millions of dollars.

Tobler also was hailed in a proclamation from Gov. Brian Sandoval as “instrumental” in the Interstate 11 bypass, which is expected to alleviate traffic in the city, as well as “influential” in increasing resident participation under the city’s new recycling program.

Councilman Duncan McCoy credited Tobler’s discussions with public-sector unions for the city’s ability to prevent mass layoffs at the height of the recession. McCoy thanked Tobler for being a stabilizing influence on the council, allowing for progress “even when it was a circus in this town.”

Councilwoman Peggy Leavitt said Tobler always conducted himself with honor and taught her “how to hold yourself in public office.” Councilman Cam Walker credited Tobler for getting him into politics, and for not losing his cool even in challenging times during the economic downturn. Councilman Rod Woodbury, the incoming mayor, said Tobler possessed strong convictions, but was willing to look at issues from others’ points of view, and “he always did it for the right reasons.”

Tobler grew emotional on the dais, thanking the department heads he had worked with at City Hall and calling the city’s recent success a team effort achieved through relationships.

“I think there is a different way to do government and politics than the difficulties that many towns and commissions have where they don’t work together,” Tobler said. “And I think this council is different. It’s been an honor.”

Alluding to the years of “division and difficulty,” he said four years ago, he would have been “celebrating going out.” Had Walker and McCoy not joined the council, the town might have been “very different,” he said.

He thanked his wife, and said he looked forward to spending more time with his two daughters.

Causing some confusion was a motion to amend a contract signed in 2012 with Korean solar energy company KOWEPO, requiring a brief break before council approved it. KOWEPO signed the 50-year contract in 2012 to lease city-owned land in Eldorado Valley to develop solar facilities.

Under the terms of the lease, KOWEPO has until Feb. 1 to begin developing the property. Because the Korean company has not yet landed a power purchase agreement with any utilities to sell its power, the land remains vacant. But the lease is in the company’s name, exposing it to state taxes, which City Attorney Dave Olsen said was not intended when the contract was signed.

The amendment is an option agreement, giving KOWEPO the right to keep the lease in the name of the city, which as the property’s owner does not pay taxes on it, until a power purchase agreement is signed.

“They don’t have the appearance of having the property, and they avoid the tax issue,” Olsen said.

In turn, the change heads off the prospect of “future litigation” between the company and the city over the tax issue, Olsen said.

Woodbury, noting that council members did not have the contract in front of them and that it had been three years since the contract was signed, questioned whether the amendment “wouldn’t (require the city to) start back on Day One of the lease again?”

Olsen replied that the underlying lease remained the same, and that the 50-year term “has been established.” He also said payments already made by KOWEPO, including a $3.1 million upfront payment, are nonrefundable.

With four vacancies on the volunteer allotment committee, the council drew three new members by lot. Peggy Caspar, Myreen Aschenbach and Donna DiLullo were selected, while the fourth vacancy remains to be appointed.