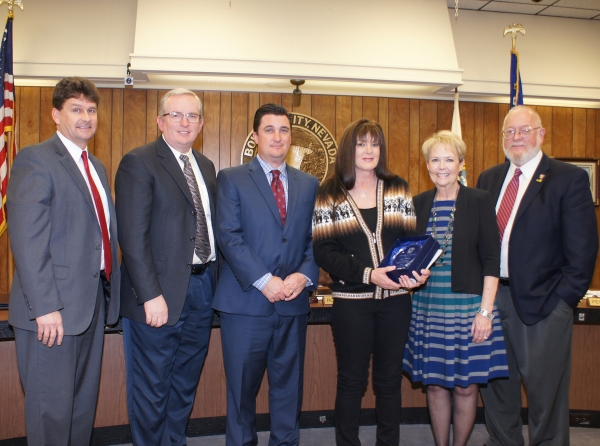 City Council members looked to the future, making plans to secure the city’s financial stability, during its meeting Tuesday night.

The lease with SunPower is for 247.6 acres of land and is the second phase of its Boulder Solar project. The city will receive $1,700 per acre for at least the next 20 years. There also are two 20-year options that could provide revenue for the city for a total of 60 years.

“The item here tonight is one more big step in moving the development of solar power in the Eldorado Valley to its full potential,” said City Attorney Dave Olsen as he introduced the bill to approve the lease agreement.

Andrew Hamilton of SunPower said the new lease will allow the company to produce 50 megawatts of energy that will be sold to Nevada Energy. He anticipates they will be able to start construction on the solar-power-generating facility late in the first quarter of the year or early part of the second quarter.

The parcel they plan to develop is part of the original 1,500 acres area of land they acquired options for in early 2015 from Korea Midland Power Co.

In conjunction with the bill to approve the lease, SunPower has agreed to pay the city $26,039 per year until 2020 to maintain exclusive options to develop the remaining acres.

After unanimously approving the lease, council members turned their attention to the city’s five-year financial plan.

According to Financial Director Shirley Hughes, revenue from the solar leases have played a key role in the city’s financial stability and ability to weather the recession. She said the city currently has more than 8,000 acres of land leased and five active facilities. Last year, those leases brought in $8.6 million for the city.

“Solar lease revenues have provided the bridge to additional revenue streams and made it possible for the city to maintain its workforce and services during the worst economic decline in the history of our city,” she said.

Additionally, revenue from the solar leases allowed the city to accelerate its debt payments and completely eliminate all general fund debt this year, including paying off the debt incurred for the construction of the Boulder Creek Golf Club.

Currently, the city maintains two debts in its utility fund, one for raw water line bonds and one for the third intake at Lake Mead, both payable to the Southern Nevada Water Authority. Combined, the city owes $28.8 million in principal and $9 million in revenue. These debts are projected to be paid off in 2028 and 2017, respectively, provided there are no major unexpected expenses needed for capital improvements, she said.

Hughes said that there is currently a utility rate study being conducted because “what the city gets now barely covers basic operations” and doesn’t consider the funds needed to improvement or replace aging equipment and vehicles or fund emergency reserves. It is hoped that results of the study will be available in the next 30 days.

Mayor Rod Woodbury said he can guarantee 100 percent that the study will show that the city’s utility rates are too low.

“We will have to make some hard decisions,” he said. “We have been spoiled.”

Councilman Rich Shuman wanted to ensure that the financial plan was aligned with the city’s strategic plan, which Hughes assured him it was.

After discussing the city’s finances, council members turned their attention to the annual land management plan, which designates possible usages for city-owned property as well as if any parcels should be leased or sold.

Brok Armantrout, community development director, said there were no additions to the plan and it remains as it was submitted in 2014.

The plan does include nine possible actions that staff is recommending take place this year including designating 50 acres west of U.S. Highway 95 that was the site of a dirt bike track for development as a drone port; appraising two parcels, one 40 acre site adjacent to Boulder Creek Golf Club and another 29 acres at the southeast corner of Adams Boulevard and Bristlecone Drive, and putting them up for sale; and looking at a 20 acre parcel on Adams across from the airport for potential development options.

• Passed Bill No. 1782 approving an amendment to an agreement between the city and the Regional Transportation Commission of Southern Nevada for provide additional right of way access and easements to city property for the construction, operation and maintenance of Interstate 11.

• Adopted Resolution No. 6427 rejecting all bids for the Juniper Way and Fifth street reconstruction project.