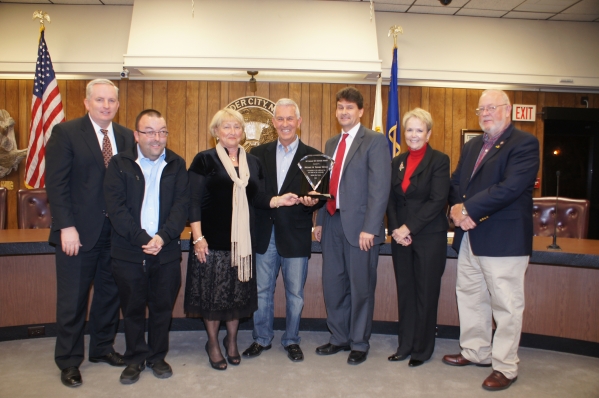 The end of the year City Council meeting saw its share of celebration and sorrow on Tuesday night.

On one hand, end of the year awards and community donations were celebrated. On the other, protesters over former Boulder City Animal Shelter supervisor Mary Jo Frazier’s execution of innocent animals filled the many in attendance with a sense of sorrow.

By the end, however, an overall satisfaction was felt throughout.

Brad McKinley donated the check on behalf of the solar power company, which has donated to the toddler swim program before.

“On behalf of Copper Mountain, we’re truly happy to do this,” McKinley said. “We’re thankful (Boulder City) has the programs in the community we’re able to donate to.”

The program was started by the Southern Nevada International Code Council a few year ago, according to Parks and Recreation Supervisor Roger Hall. The grant-based program was designed to reduce drowning deaths in toddlers, more specifically kids 4 and younger.

According to the Nevada Institute for Children’s Research and Policy, drowning was the third leading cause of accidental death among children in Clark County in 2007 and 2008. Over the last nine years, Nevada has lost 63 children to drowning. Of those 63, 54 were toddlers 4 or younger.

There’s also been 416 submersion incidents in Southern Nevada during those nine years, 343 of which were toddlers.

“We received $1,500 to start the toddler program a few years back,” Hall said. “To date, 277 toddlers have participated in the program.”

Jacob Anderson, the aquatics coordinator at the pool, accepted the check.

The learn to swim classes are offered to toddlers at the city swim complex free of charge until the funds run out.

“The Copper Mountain group are great,” Mayor Rod Woodbury said. “They’re professional partners with the city and we’ve enjoyed that partnership over the last several years.”

Employee of the Year winner Ann Inabnitt, who was promoted to the supervisor position at Boulder City Animal Shelter after Frazier’s resignation, was supposed to be honored at the start of the meeting, but declined to be there to accept the award.

Woodbury said Inabnitt didn’t want to take away from the issues surrounding the Animal Shelter’s former supervisor and felt it was best not to be there.

Michael and Teresa Giroux, along with their son Andrew, were presented the 16th Bill Andrews Award for outstanding community service. The Girouxs have been involved in numerous efforts to improve the community, including covering the costs of exterior renovations to the Boulder Dam Hotel.

“This award is really appreciated,” Michael Giroux said. “We just want to be a better community each year that we’re here.”

Woodbury had high praise for the Girouxs’ efforts as well, saying their humble approach to helping the community shouldn’t be overlooked.

“They never ask for anything in return and get so much pleasure in helping the community,” Woodbury said. “It’s a fantastic thing to have them here.”

About half a dozen people spoke during public comment at the end of the City Council meeting.

Residents expressed during that time anger toward Frazier for what she’d done, but their appreciation that the decision to not pursue charges had been reversed.