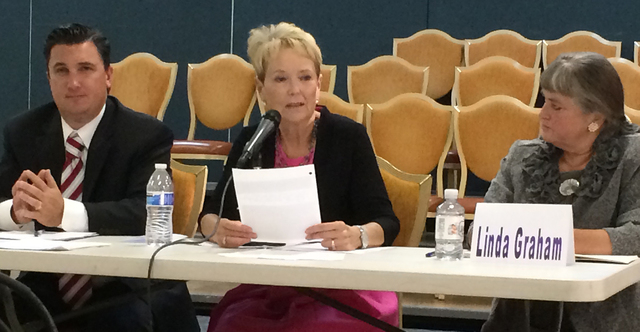 The three candidates running for City Council made one final push for votes as they shared their thoughts about several issues Tuesday evening inside the Elaine K. Smith Center.

About 50 people watched and listened as Rich Shuman, Peggy Leavitt and Linda Graham gave their input on myriad subjects, including Interstate 11, naturally occurring asbestos, the growth of Boulder City, and this year’s ballot question among others.

About half of the questions were submitted ahead of time so candidates could do research before the event, while the rest were asked on the fly. The event was sponsored by the Chamber of Commerce.

There was not much dissent among the candidates as all three shared opinions on a majority of the issues. All were in favor of ballot question No. 1, which asks the voters if the city can spend up to $1 million per year indefinitely from the capital improvement fund to repair city facilities.

Leavitt equated the capital improvement fund to making repairs on your home.

“The electrical system and the water system have been deteriorating over time. Over the last six years or so, we haven’t had the funds to make those necessary repairs,” he said.

Candidates also were asked about the city’s budget. All three said they believed the budget was in good shape, although Graham said she had not yet seen it. Instead, she said she spoke previously with city Finance Director Shirley Hughes about it.

Graham also said that Interstate 11 would have a positive effect on Boulder City, and local business owners would be fine if they continued to market themselves.

Leavitt said the interstate could bring positive and negative change. She said the downtown district would remain a “resort destination” after the bypass was built, although she worried about the businesses located off of Nevada Highway.

Shuman said the city will be affected by the way it markets itself once the interstate is finished.

“I really think it’s what we make of it. It’s been referred to as the biggest project in Boulder City since the Hoover Dam. It’s a big deal,” he said. “I like to look at it as a way to reinvent ourselves.”

When it came to the subject of naturally occurring asbestos, the candidates said they felt reassured that all entities involved were taking the proper procedures to ensure the safety of all Southern Nevadans.

“We shouldn’t be fearful of this,” Shuman said. “I picture it as a fluid situation that will change. It will constantly be monitored, different mitigation efforts will come into place. Our highest priority as a City Council is to keep our people safe. I’m not fearful, but I’m vigilant.”

One of the few questions they disagreed on was the possibility of raising council pay. Graham said she was against it, Shuman said he was for it and it’s a matter that should be evaluated every four years. Leavitt said a pay raise would be appropriate but wouldn’t go into details or say how she will vote so she didn’t violate the open meeting laws.

All three candidates said they were in favor of maintaining a limited growth in Boulder City, although Leavitt said there would be more housing and commercial growth over the next 10 years.

Linda Barnett, a Boulder City resident since 2005, said the event allowed her to get a better insight of all the candidates.

“I think this covered the issues, but I just wanted to see the power behind each individual personality,” she said. “I really got a feel of the authority they had inside.”

Michael Giroux has lived in town since 1985. He said having a debate was an important part of the political process.

“How else are we going to vet candidates?” he said. “We’re low key. We’re not going to have any flamboyant politicians. We’re not a cabal, it’s just people willing to serve, and we all share the vision of what we want this town to be.”

Early voting runs until Saturday at City Hall. The general election is June 2.