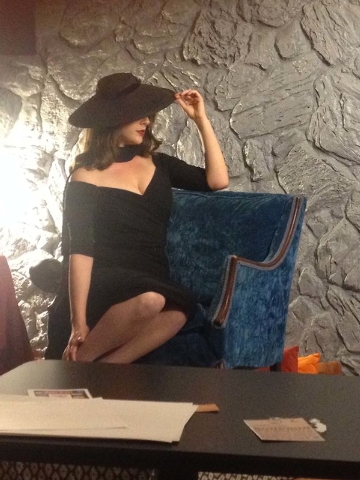 Lee Lanier, co-founder and executive director of the Dam Short Film Festival, brought the event to Boulder City after doing live-art shows for a years in Las Vegas and Los Angeles. Dr. Sketchy’s was founded in New York City by award-winning artist Molly Crabapple in 2005.

With approximately 130 branches around the world, Lanier decided it was time to bring one to Boulder City to get more people involved in life drawing. He’s hopeful the monthly event will draw as big of a crowd as the ones in Las Vegas. About 10 people showed up to the premier event.

“It’s our first one (in Boulder City), so we really need to get the word out,” Lanier said. “The shows in Vegas get about three dozen people.”

Dr. Sketchy’s Anti-Art School will host a different life-drawing event on the first Wednesday of every month inside The Spillway at the Boulder Dam Hotel. Participants must be at least 21 years of age. Tickets are $10 in advance and $15 at the door.

Read the full story in the May 15 edition of the Boulder City Review.