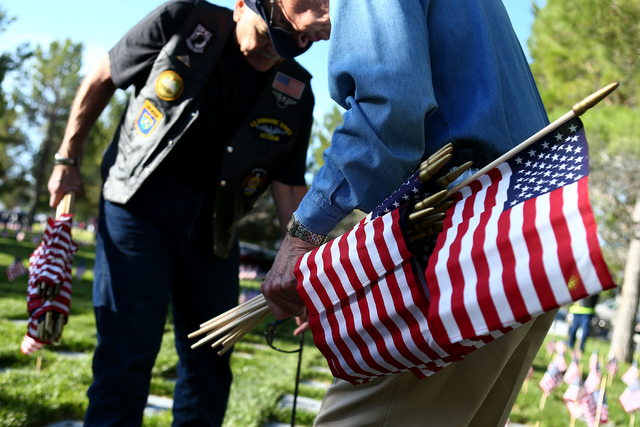 I come from a family of Marines. My dad was at Guadalcanal. My uncle was a Marine pilot for the Royal Air Force before

My cousin was in town, her dad was a Seabee. And hubby volunteers at the veterans’ home and knew many who have passed on.

As we laid flowers at a gravesite or monument of nearly every branch of service, men and women who had served our country, I contemplated how Boulder City, Hoover Dam and our surrounds were impacted by, and played their roles, in the World War II theater.

The movie “Patton” is about the war’s North African campaign that began in 1940. The campaign was about which side would have control the Mediterranean Sea. The major battles began when Gen. Erwin Rommel took command of Germany’s Afrika Korps in 1941. With Britain’s Gen. Bernard Montgomery commanding the Allies, it became a battle of push and shove across the desert, each winning battles, each losing men and territory, both armies mired up to their tank hubcaps in sand. Progress was often nil.

This terrain was unfamiliar to any Allied or Axis commander. Then enter the United States, Gen. George Patton and Operation Torch (the British-American invasion of North Africa). Operation Torch was implemented in November 1942. Prior to America’s entry, our troops needed desert training. Early in February 1942, Patton was given command to establish a site to train our troops “under the harshest desert conditions possible” (Desert Training brochure, Bureau of Land Management). By March, the site was approved and under construction. April saw the first troops arrive to what would be the standard: Tents as far as the eye could see, salt pills and one canteen of water a day for drinking and cleaning. The normal training tour lasted 14 weeks.

From 1942-1944, more than 1 million soldiers, 60 armored infantry and artillery divisions, fighter pilots and heavy bomber squadrons trained there. “I want my men to take just as rough a beating as I can give them in as near the situation they will have in North Africa,” declared Patton (www.kcet.org). In July 1942, Patton was called to Washington, D.C., to participate in the planning of Operation Torch. In August he took command of Operation Torch. By 1944, the Desert Training Center troops had deployed to North Africa and on to Normandy.

Now abandoned, some Desert Training sites can be visited using a four-wheel drive. Some traces of the camps (rock-lined roads and chapel altars constructed by the troops used for their remote desert worship sites) still exist. Monuments mark sites, but warning signs must be followed as unexploded ordinance litter some sites.

Another World War II site is in Boulder City’s backyard. In 1939, the State Department was warned of a Nazi plot to bomb Hoover Dam’s intake towers. Rumors that spies from Las Vegas had visited the dam several times ran rampant. Shaun McKinnon of The Republic states security reports read “Life and death orders have been given by Berlin to put LA in the black.”

By 1941, tensions were high. On Dec. 7, 1941, Pearl Harbor was bombed. On Dec. 8 , the interior secretary and the Army began collaborating to design a pillbox above Hoover Dam. Records indicate another pillbox on the Nevada side, but it has never been located. The Arizona pillbox was manned with soldiers from 1941 to 1943. Monetary shortfalls closed the post in 1944. The pillbox was once open to the public, but graffiti and damage to the site caused it to be closed. The abandoned World War II pillbox can be seen on the bluff top above Hoover Dam on the Arizona side. For more information on the pillbox, visit http://bit.ly/24ufRW5.

Cat Trico has been a resident of Boulder City since 2003 and is a past president of the Senior Center of Boulder City and co-founder of the Decker Lake Wetlands Preserve. As an author and editor, she contributed to “Rights, Responsibilities, and Relationships” for youth. She can be reached at cat.circa1623@gmail.com.

My grandmother introduced me to the card game of Pit. It is based on commodity trading. It is as frenzied a game as the craziness of the commodity floor, with everyone vying to “trade” all at once.

The word for today is sentient. Dictionary.com defines sentient as having the power of perception by the senses; conscious. Sentience connotes the capacity for sensation or feeling.

Daylight may be saved, but at what cost
By Cat Trico Boulder City Review

In a children’s tale there was a city of fools. The people had a town hall with a roof covered of grass. They wanted to cut it. The roof was too high. The ladder was too short. They thought a lot and decided to cut a piece of the low end of the ladder and lengthen it to its top end.

Take back schools; give kids chance to succeed
Cat Trico

Change the world one word at a time
Cat Trico