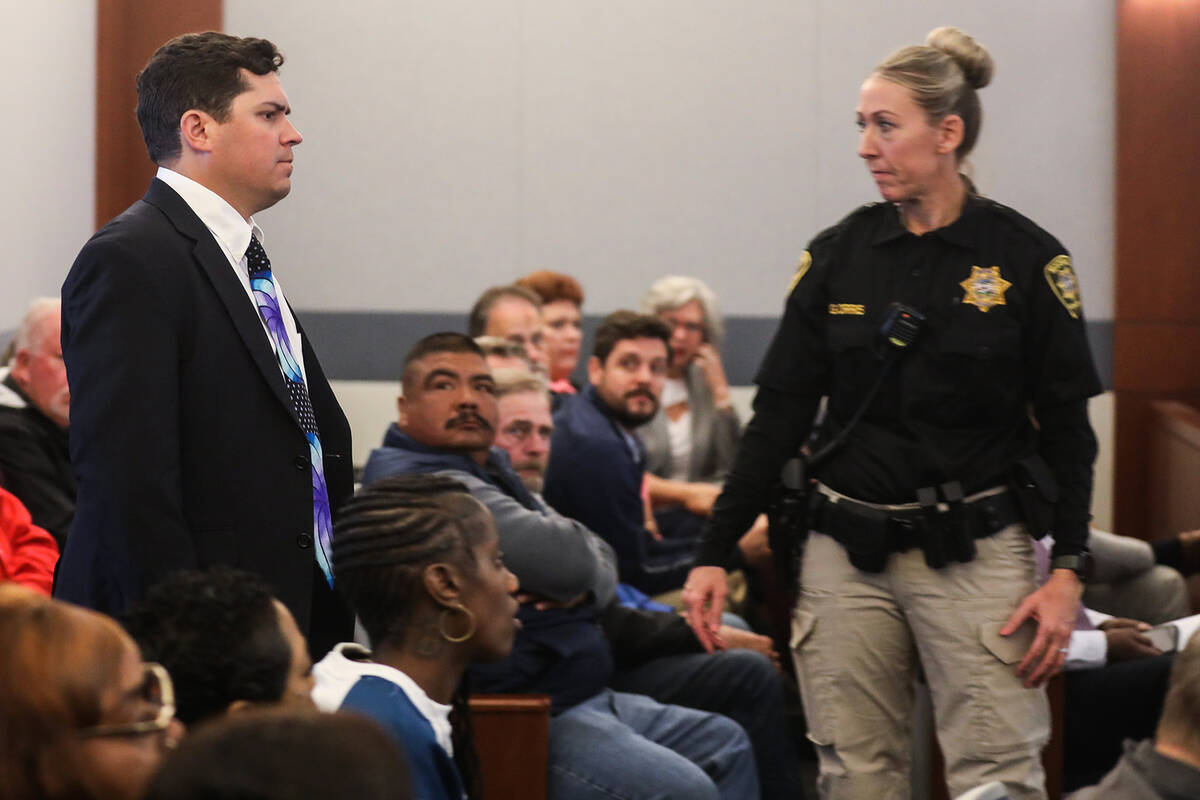 (Rachel Aston/Las Vegas Review-Journal) Joshua Buckingham enters the courtroom for his sentencing at the Regional Justice Center in Las Vegas on Tuesday, Nov. 15. He pleaded guilty to a reckless driving charge in a 2019 crash on Boulder City Parkway that killed a 58-year-old Las Vegas man. 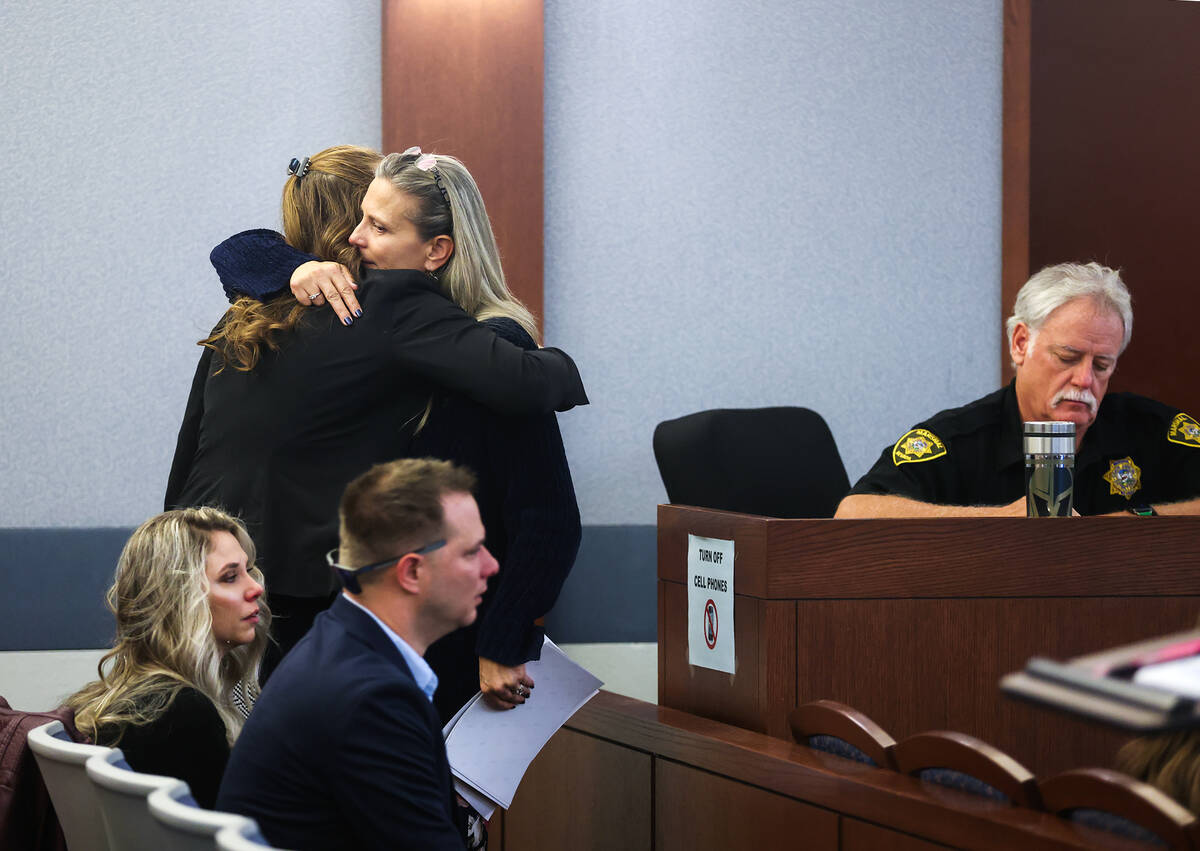 (Rachel Aston/Las Vegas Review-Journal) Stephanie Reiner, widow of Randy Reiner, is hugged by a family member after reading her victim impact statement in the sentencing of Joshua Buckingham at the Regional Justice Center in Las Vegas on Tuesday, Nov. 15. 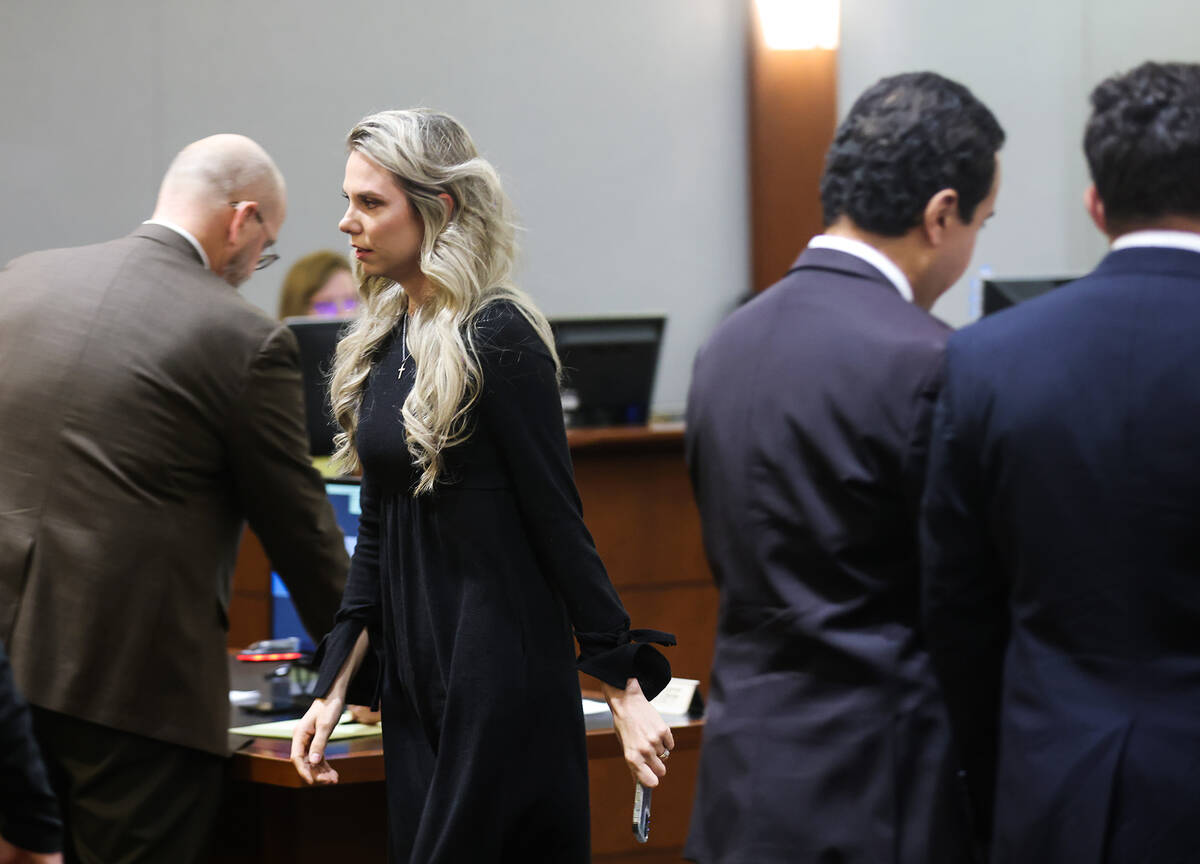 (Rachel Aston/Las Vegas Review-Journal) Meaghan Price, stepdaughter of victim Randy Reiner, walks away after reading her victim impact statement in the sentencing of Joshua Buckingham at the Regional Justice Center in Las Vegas on Tuesday, Nov. 15. 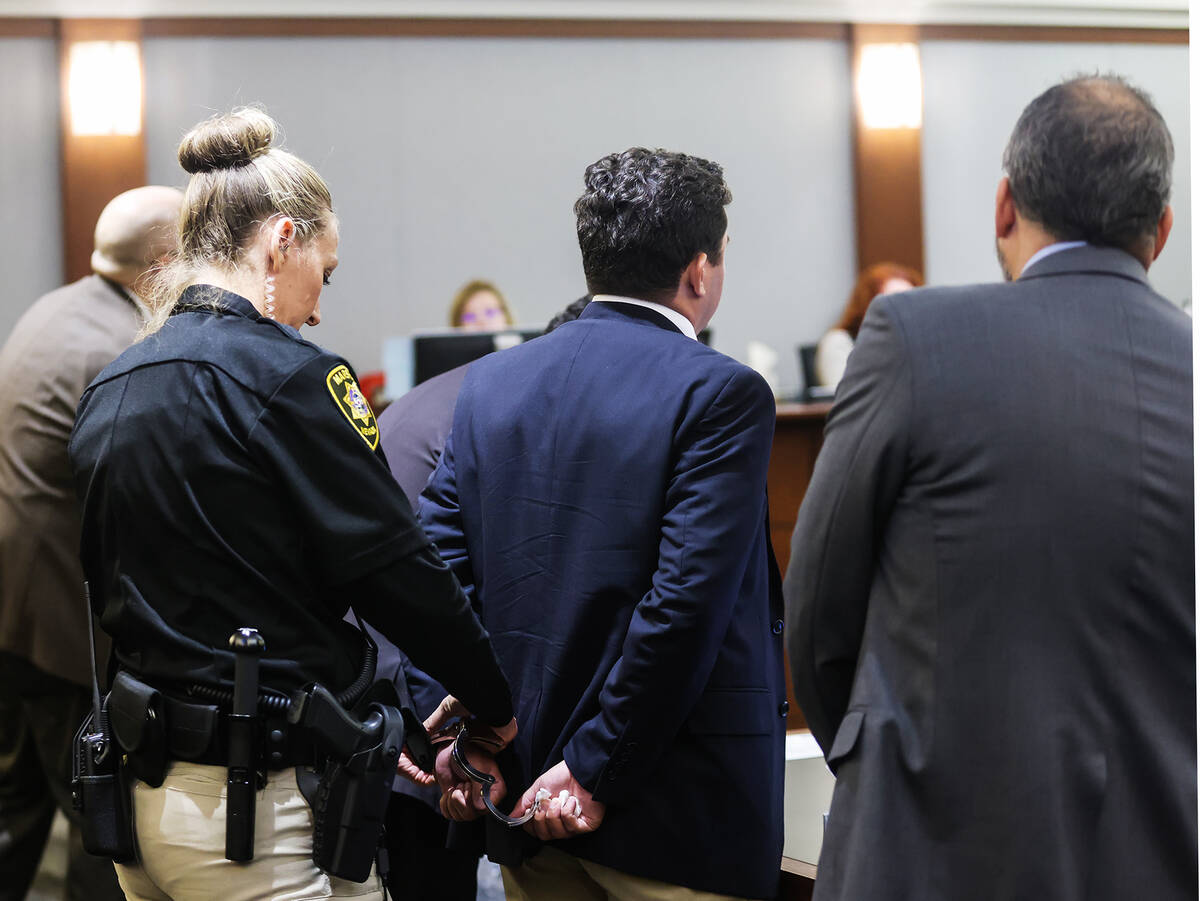 (Rachel Aston/Las Vegas Review-Journal) Joshua Buckingham is handcuffed at the Regional Justice Center in Las Vegas on Tuesday, Nov. 15, after being sentenced for a reckless driving charge for killing Randy Reiner in a 2019 crash on Boulder City Parkway. 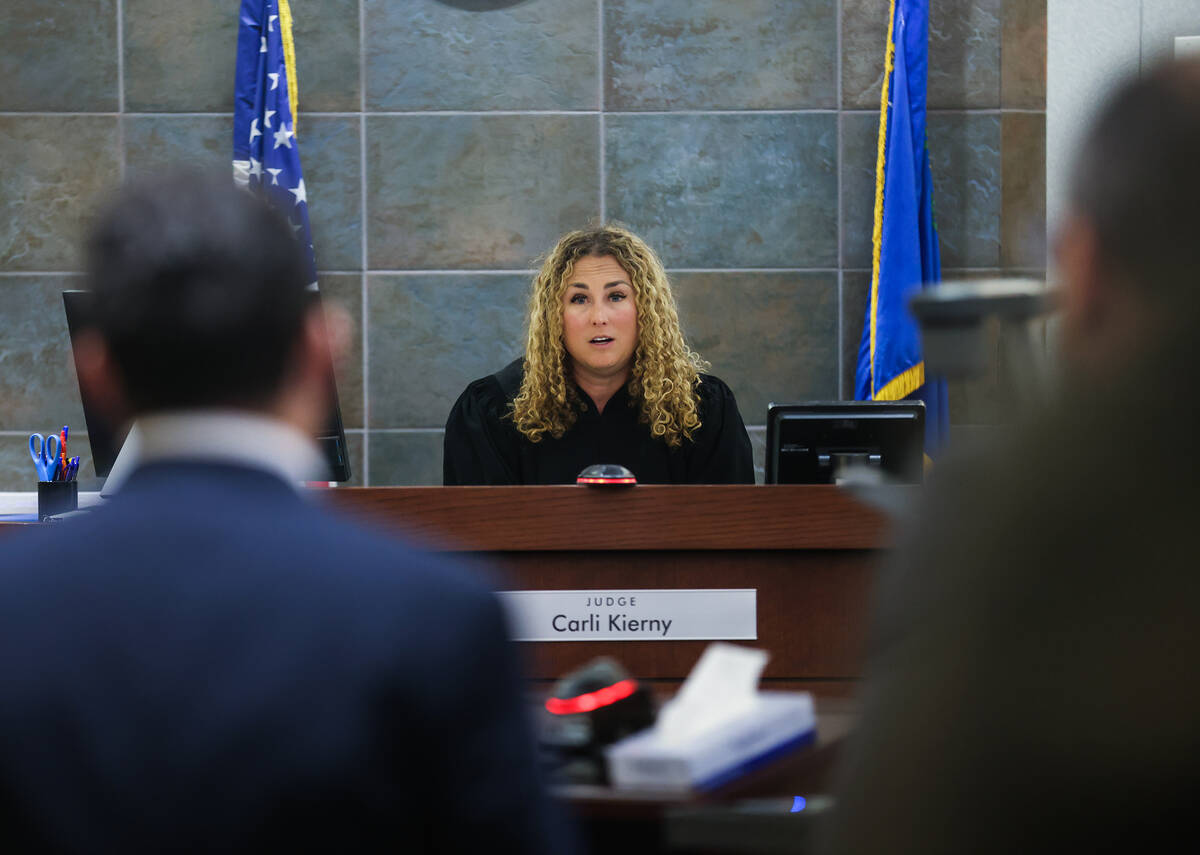 “Every day I feel that loss, every day when he doesn’t sit at his desk and talk to me,” Reiner’s widow, Stephanie Reiner, said, standing before District Court Judge Carli Kierny. “I miss him so much my heart aches for him.”

“The impact of our of loss will be felt for generations to come,” she said. “No one should have to die like that. It was horrific.”

“I can never sit on the porch and have another beer with him, another cigar,” he said. “My children don’t have a grandfather.”

Randy Reiner’s stepdaughter Meghan Price said she misses how safe he made her feel. Thinking about his death can be “enough to send me into a panic attack.”

“For almost four years now I’ve been trying to get my old self back,” she said. The day of the crash “was the worst day of my life. I have never been the same since.”

Kierny ordered that 30-year-old Joshua Buckingham, who was convicted of felony reckless driving resulting in death, serve between two and six years behind bars, prescribed by state statute. He would be eligible for parole after serving two years.

Witnesses told the Nevada Highway Patrol they saw Buckingham’s white 2019 Chevrolet Malibu driving by them, weaving through lanes at about 100 mph on the highway, stopping at a red light and then returning to a high speed, at one point veering onto the shoulder to pass traffic.

Randy Reiner, who ran a Las Vegas stone masonry company, had just filled the tank of his Ford F-250 pickup at a Rebel gas station when he drove onto the southbound lanes of the parkway on his way to make a left turn into northbound traffic.

Buckingham’s Malibu, going at least 90 mph, according to the Highway Patrol, smashed into the left side of Reiner’s pickup, which flipped in the air and landed on the roadway, Giles said.

The impact forced the driver’s side door to open, trapping Reiner’s head and neck in the doorjamb, crushing him when the vehicle landed. He died instantly.

Tests on Buckingham’s blood found no trace of drugs and only a minimal level for alcohol. Giles said Buckingham admitted to authorities that he had been “hauling ass” at a speed as high as 135 mph.

Other media reports also stated that Buckingham admitted to taking prescription drugs before leaving a casino and heading south.

Buckingham’s defense attorney, Michael Castillo, said that his client since has been diagnosed with bipolar disorder and argued that he was in “a manic state” while driving at the time of the collision.

Castillo said Buckingham takes medication to treat his mental illness and has stayed out of trouble since his arrest in 2019. He asked that the judge’s ruling be “balanced with mercy” and that she consider sentencing Buckingham to probation.

In his statement, Buckingham asked Randy Reiner’s family for forgiveness. “I’m sincerely sorry from the bottom of my heart,” Buckingham said. “I am beyond heartbroken.”

But outside the courtroom, Stephanie Reiner said that Buckingham citing his mental state was a “convenient” excuse.

She said she did not believe the sentence was enough to punish him and still agreed with the district attorney’s original charge of second-degree murder in the case, which was turned down by the Nevada Supreme Court.

“That would have been justice,” she said, adding that she planned to oppose his early release at parole hearings.