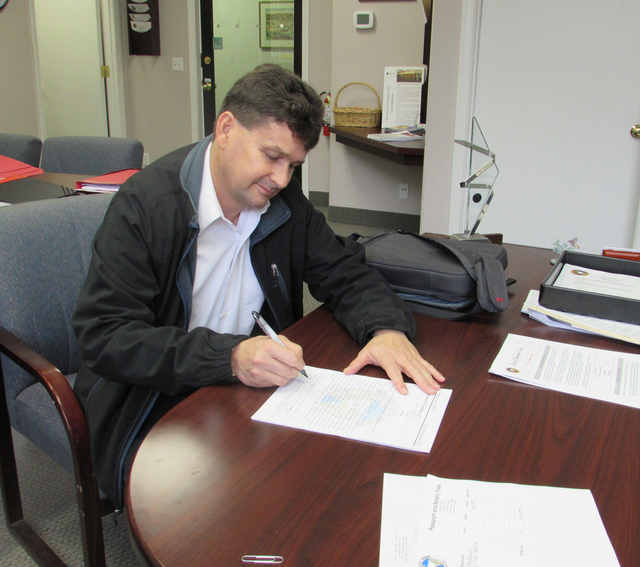 In a little more than four months, Councilman Rod Woodbury will be sworn in as the 16th mayor in Boulder City’s history.

Woodbury, 47, was the only candidate to run for mayor during the weeklong filing period that ran from Jan. 27 to Feb. 5. He will take over at a crucial juncture in the city’s history as construction is set to begin on Interstate 11 just two months before he takes office June 23.

“We’ve got a lot of issues facing the city,” Woodbury said. “I-11 is front and center in a lot of people’s eyes because there are a lot of unknowns there. We’ve got to have a plan in place.”

Woodbury wants to properly market the city and bring in new businesses during bypass construction as well as after its expected completion in 2018. He credited Mayor Roger Tobler with leaving the city in good shape, which will make his transition to mayor a bit smoother.

“I think the transition’s going to be fine. I-11 is coming. It doesn’t really make me nervous. I’m excited for it, and we’re preparing properly for it,” Woodbury said. “I think Roger has left a good legacy, and he’s helped to steer us in the right direction.”

Woodbury graduated from Boulder City High School in 1985 and earned a bachelor’s degree from Brigham Young University in 1992. After a brief career as a public school teacher and high school basketball coach, he enrolled in BYU’s Law School, where he earned his degree in 1999.

He said his experiences with both the public and private sectors will help him establish relationships with other jurisdictions. He credited his four previous years on the council as a beneficial experience for his new role as mayor.

His father, Bruce Woodbury, was Clark County’s longest-serving commissioner and his sister, Melissa Woodbury, is a four-term assemblywoman.

“There’s always a learning curve when you’re new. Just being in the trenches is important,” he said. “I never really envisioned myself being a politician or a public servant, but I kind of fell into it. Growing up (around it), you become familiar with the process.”

Tobler, who served four years as a councilman before being elected mayor in 2007, said his time on the council helped him acclimate when he took over as mayor.

“I think that helps. Being mayor, you’re a councilman and you’re kind of the figurehead. You represent the city at different functions. Rodney has those talents and the ability to do that as well,” he said.

During his 2011 City Council campaign, Woodbury’s 2,689 votes were the most of the five candidates who ran. In 2015, he did not have an opponent to run against. Although he said the campaign process is good for the community, he’s relieved he doesn’t have to run one this year.

Woodbury has met with former Boulder City mayors to pick their brains and gain ideas as he prepares for his new job. He said he plans to use Tobler as an adviser once he becomes mayor in June.

Aside from Interstate 11, Woodbury said he wants to see the city address its capital improvement needs, including much-needed repairs to the outdated electrical infrastructure.

“Capital improvement needs and infrastructure needs have been in my sights for the last few years,” he said. “We’ve got a lot of work cut out for ourselves there.”

And even though Boulder City has been the beneficiary of millions of dollars in solar lease revenue that helped keep the town afloat during the Great Recession, Woodbury said alternative revenue sources need to be found to keep the economy in a healthy state.

He also said the council has been a productive group to work with, and has helped the city make great strides during the past four years.

“We’ve got a good group, and we’re going to continue to build bridges,” he said. “We have disagreements and we have differences of opinion sometimes, but we always seem to come to a consensus.”

“I’m fully confident in this council and staff that they will be looking out for us. Rodney is very capable and I think he’ll make an excellent mayor,” he said.

As Boulder City prepares for one of its most crucial chapters, its new mayor plans on maintaining a proactive style to lead it into a successful future.

“When it comes down to it, you’re talking about common-sense things mostly,” Woodbury said. “I never believe in punting when we can make good decisions.”

Woodbury is the founder and president of Woodbury Law and serves as a Boy Scout leader and youth mentor. He also has been on the Boulder City Museum and Historical Association’s board of directors.

He and his wife, Leslie, have seven children — five boys and two girls — ranging in age from 7 to 21.