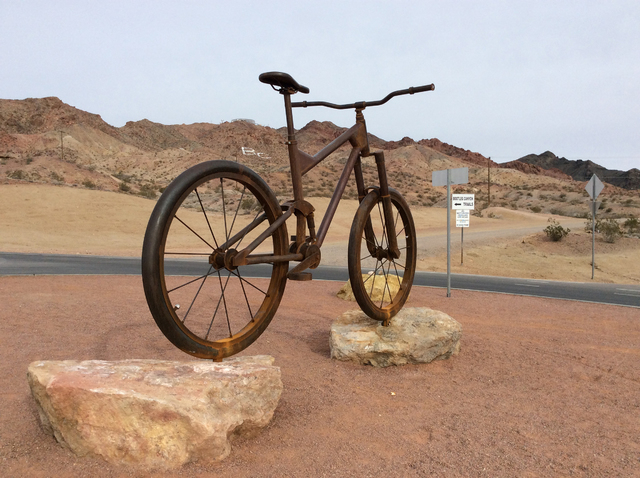 The brainstorming of a late Boulder City employee, as well as a federal grant worth more than $800,000 are going to help turn the parking lot at Bootleg Canyon into a habitat for larger-than-life concrete sculptures of the desert’s native species.

Seven sculptures will be built near the top of the canyon, with interpretive panels spread throughout the trail for visitors to learn more about the Mojave Desert, said Public Works Director Scott Hansen.

The project was the idea of Damon Ohlerking, a former city employee who died of prostate cancer in 2006 at the age of 60. Ohlerking designed several projects around Boulder City, including the layout of the Southern Nevada Veterans Memorial Cemetery.

Hansen said Ohlerking had designed parts of the Bootleg Canyon Mountain Bike Park before he died, and seeing it come to life a decade later is a fitting way to honor him.

“It was his kind of vision for this to be an educational area to learn about the Mojave Desert,” Hansen said. “We really want something that’s going to be monumental. Sit by it and get your picture taken next to it.”

Hansen said the sculptures will be 8 to 10 feet tall, similar to the ones inside the D Gates at McCarran International Airport.

The city has met with the Nevada Wildlife Department and the National Park Service to get feedback on what the sculptures and panels will look like. Hansen said the panels would look similar to the ones at Hemenway Park that provide information on the history and biology of the desert bighorn sheep.

For Hansen and other city officials, the Bootleg Canyon project isn’t exigent, but it’s another important step in getting tourists to come to town once the Boulder City bypass is complete.

“Obviously, the interstate is at the forefront of my mind every day. I’m sensitive to the local businesses, and I want us to have more things in Boulder City that are going to bring more tourists off the freeway,” Hansen said.

The city obtained an $811,000 grant through the Southern Nevada Public Lands Management Act, which allows the Bureau of Land Management to sell public land within a specific boundary around Las Vegas.

Hansen said agencies that receive grants from the act tend to use it on trails, but Boulder City wants to use it for the sculptures.

Mayor Roger Tobler applauded Hansen for getting the grant and trying to maintain a healthy Boulder City economy after the interstate is completed in the next few years.

“It’s important that we do look at other ways to improve … to have people come in and enjoy the desert more,” Tobler said during the Jan. 13 City Council meeting. “This will be beneficial for our city.”

Hansen said the city recently selected Universal Precast Concrete as the lead contractor for the project. The next step is to compose at least 10 sketches of native animals. The council will then choose its top seven, and Wildlife Department and Park Service will help until the project is complete.

Hansen said he’s hopeful that all the sculptures and panels will be finished in November, which means the parking lot near the top of the canyon will have a different look by the end of the year.

As visitors gaze at the mountains that jut out like giant slabs of rock smashed together under an endless stream of open sky, they’ll also be able to see a giant sculpture of a horned lizard, or rub the foot of a jackrabbit.

It’s what Ohlerking would have wanted, according to Hansen.

“I had a lot of respect for him and the improvements he brought to Boulder City,” he said. “It’s nice to finish out this park into something that will be a very unique and exciting area that people will want to go see.”