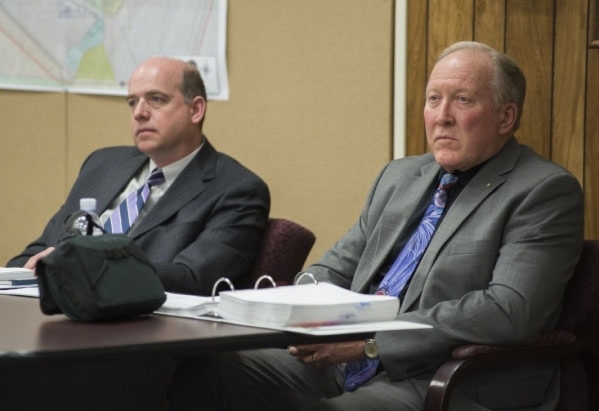 For the first time since 2013, the City Council evaluated the performance of several key employees. On Wednesday morning, they reviewed the performances of City Manager Dave Fraser, City Attorney Dave Olsen and City Clerk Lorene Krumm.

“Did we mention we hate these things,” Mayor Rod Woodbury said jokingly.

Fraser, who actually had a less formal evaluation of his performance in April 2014, was given high reviews by all his colleagues. The City Council gave Fraser 11 goals to complete over the year, all of which he was pleased to report have been completed.

One of the highlights for Fraser in the past year was bringing in revenue from the solar leases he negotiated. The leases were able to bring in $10 million in up-front revenue and made it possible to pay off the Boulder Creek Golf Club debt significantly earlier than expected.

“The city is going in a healthy direction under Dave,” City Councilman Duncan McCoy said.

If all goes according to Fraser’s plan, the solar leases that are under construction or in the permit process will bring in approximately $58 million to Boulder City during the next 30 years. Those solar leases that are still in the design process will bring in another $40 million. It’s money that Fraser hopes will help fund the needs for the city’s aging infrastructure.

Even with all the positive feedback, there was still chinks in Fraser’s armor that the council did not hesitate to point out.

“I believe that our department heads have to be held more accountable for the jobs that they do. I think your management style is one that does not micromanage them,” City Councilman Cam Walker said to Fraser about managing the employees under him. “I think that the community needs to know that accountability is a very important thing in an executive-level position like our department heads are in. I think it is important that you portray that to them in their performance evaluations.”

According to Walker, Fraser has to have more accountability with the solar leases. The city manager has yet to send a one or two page summary of the $100 million land lease to the council.

“When we go through the budget it is still not a specific dollar amount that they are going to pay us next year, and I don’t know what day we are going to send out the invoice and when we’re going to get it back. These are big companies that can sue us for a lot of money, and that really concerns me,” Walker said.

Fraser quickly mentioned the addition of an administrative officer, a position that was approved during the previous night’s council meeting, that will serve as a central pivot for the completion of citywide administrative tasks. This position was created by Fraser and he believes it will ensure the continued efficient operations of Boulder City.

City Attorney Dave Olsen was not as fortunate as Fraser in his evaluation. During his review in 2013, Olsen was asked to provide quarterly reports with fiscal notes, including issues regarding leases even if litigation is not involved. It was a task he did not complete.

“I cannot stress enough how important communication is with the City Council,” Councilwoman Peggy Leavitt said about the lack of communication between Olsen and the city’s governing body.

Walker also criticized Olsen for being hypocritical, especially after he advised members of the City Council to not talk to the press when he had already done so.

Walker was the most outspoken when it came to his views on Olsen’s performance as city attorney and gave him a rating of 2.1 out of 5.

Olsen, who prefaced his evaluation by letting the council know that he does not walk on water, said he has had troubles with his computer skills as well, going as far as to not signing off at the end of emails, a task that looks unprofessional, according to Walker.

“I think I would challenge my colleagues to read what each of those five numbers say and mean. I take them very literally and specific,” Walker said after Woodbury, McCoy and Councilman Richard Shuman gave Olsen high marks on his performance. “So when we set a goal to have computer skills, let’s set a goal and make sure the house is in order.”

Krumm’s evaluation was the shortest of the three and she received the highest marks and praise from council members.

Woodbury said he plans to make performance evaluations happen every six months, a change that will help keep employees accountable — and in turn make Boulder City a better place to live.