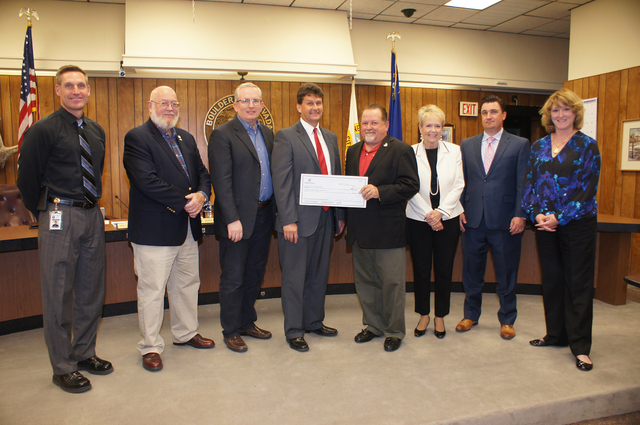 Public Works Director Scott Hansen recognized a $20,000 cash donation from Brad McKinley of SempraEnergy to replace the lights at two “Welcome to Historic Boulder City” signs at each end of town on U.S. Highway 93 near Pacific Way and Railroad Pass hotel and casino.

“Sempra’s been a great partner to Boulder City since they came to town in 1998,” Hansen said. Mayor Rod Woodbury thanked McKinley for the generous and “much-needed” donation.

Project spokesman Andrew Hamilton outlined parcels on the edge of the project’s footprint where construction crews will build a temporary water line for construction and will have access to a shared maintenance facility. The council approved the license and easement.

“Recent changes changes in state law were discovered this last fall as we were considering an appeal and it became clear we needed to update our appeals chapter,” he said.

Under the new zoning ordinance, a person who wants to appeal a decision made by department staff would go directly to the council for consideration instead of going through the planning commission, which prolongs the decision process, Armantrout said. The council voted unanimously to amend the code.

Councilman Rich Shuman reported on his involvement in meetings with the Clark County School District, which have been largely about community engagement and what’s wrong and right with the school district, but will eventually culminate in talks about reorganizing the district. He said he plans to meet with members of the public to gather their input.

Councilwoman Peggy Leavitt reported the Rock, Roll &Stroll fundraiser she helped coordinate March 12 for the Senior Center of Boulder City was a success. She also delivered words of love and support to family and friends of Christy Springgate-Hill, an “outstanding lady” and strong community member who has recently been hospitalized.

There were no comments from the public.