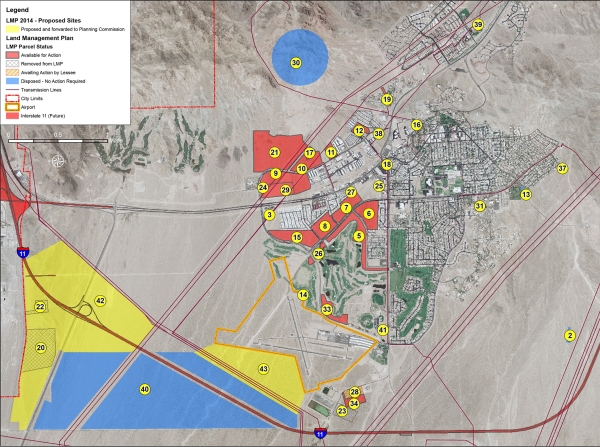 The city recently opened up applications for input regarding its yearly land management plan, and the public is encouraged to help establish new ideas for possible development.

Interested parties can submit what they would like to see built on city-owned land, whether it be a convenience store, fast food restaurant or even a solar plant in the Eldorado Valley.

The City Council will review all applications and determine which ones it would like to push forward, according to Community Development Director Brok Armantrout. Council members also can suggest ideas of their own.

After the council decides which proposals it likes, the land management plan goes to the city’s Planning Commission in November for review. Armantrout said the commission will look through the plan and provide the council with feedback for each proposal.

During their December meeting, council members will accept or reject proposed applications into the land management plan, which is typically adopted during the council’s second January meeting.

Several proposals, including a motorsports park and a solar complex, had made it into previous land management plans but were later removed.

After receiving the approval from council to pursue their ideas, Armantrout said some businesses work with city staff to develop their plans, but those don’t always end up in development.

About 13 years ago, a company came into Boulder City with the hopes of building a movie studio on Adams Boulevard near the fire station, Armantrout said. The idea was included in the land management plan, but it never came to fruition.

“Our land management plan isn’t typical of everybody else’s. There’s a little broader public input opportunity than in most,” Fraser said. “Even the step we’re taking now where we’re seeking ideas wouldn’t be a part of the process in most communities.”

The deadline for submissions is Sept. 28.

A map shows areas of land being considered by the city under its Lanad Management Plan. The areas in yellow will be forwarded to the Planning Commission for additional study and use designations and approvals. Map courtesy Boulder City

Updating the Boulder City pool is back on the table after City Council unanimously approved hiring a consultant to analyze the facility to see if it can be repaired and brought up to code.