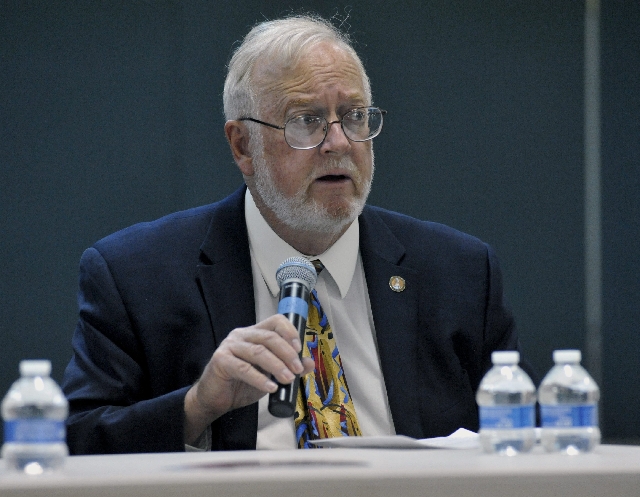 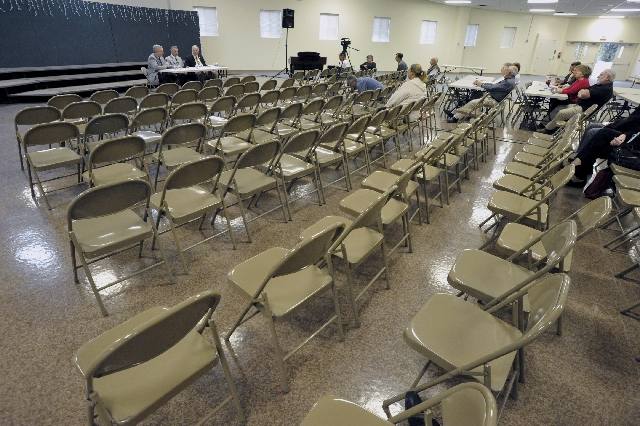 McCoy and Walker were hopeful but cautious about future revenue increases derived from land leases allotted to solar companies, especially three that have yet to be fully permitted and constructed.

The city’s expected increase in revenue rests on the success of local solar companies selling their energy to California utility companies.

“We need to be careful not to spend the money before we earn it,” Walker said.

McCoy said that the success of the projects could get the city out of most of its debts by 2017. But they agreed the money should be used wisely.

“We must not use that money for expanding the scope of the city’s operation,” McCoy said. “We must use the money for debt retirement and capital projects that have a long-lasting impact on the community as a whole.”

Walker said that he wanted at least one or two of the projects to become successful in the next five years. Walker also said it is necessary for the success of the city’s fiscal future.

Discussion of the city’s financial future was one of many topics discussed at the planned event at the Elaine K. Smith Center on Wyoming Street. The councilmen answered questions that were previously submitted by citizens through the Chamber of Commerce’s website.

The format of the event did not allow questions from the nearly dozen people who attended. The councilmen were given the questions in advance.

The questions ranged from code enforcement issues, motorcycle parking downtown, issues with the police department, to public participation in government.

There were a total of 15 questions proposed and each councilman received three minutes each to respond.

One citizen, Doug Smith, who moved to Boulder City a year ago from San Francisco, said he never became involved in California, but it seemed easier to get active in a smaller city.

One question involved the unchallenged re-election. Both were declared re-elected Jan. 21 after no one filed to challenge their seats on the council.

“It was a fluke,” McCoy said. “I do not believe it will ever happen again.” Walker added there were 10 candidates when the pair first ran in 2009.

The two councilmen were posed a question about the successes now and in their future office.

Walker said the city needs to continue to live within its financial means. McCoy added that the city should not grow the government but focus on reducing debt when new revenue is realized.

McCoy spoke about how Boulder City did not suffer like other municipalities in Nevada with losses from consolidated tax.

Cities such as North Las Vegas based their tax structure on growth multiples. McCoy pointed downward to show the revenue received by North Las Vegas and pointed straight across to show Boulder City’s current status.

McCoy said the city council had no jurisdiction over the outcome.

“If the city manager does not like the smell of the chief’s cologne … he can be terminated,” McCoy said.

Because of the automatic re-election, the first in city history, the councilmen do not need to run a campaign. However, both councilmen still wanted to have the type of open dialogue usually associated with campaign season.

Tuesday’s community forum was the second since the re-election. The pair held a less-formal community meeting Feb. 21 at the Boulder Dam Hotel.

Tuesday’s event was moderated by Jake Gutierrez, who has a long history of announcing major events. He has appeared on ESPN, Showtime and HBO. He hosted the World Cup Soccer Tournament in 1999 and is a public announcer for the UNLV Lady Rebels.

The 90-minute question and answer session will be replayed on BCTV this week at 8 a.m. and 8 p.m. following the replay of the City Council meeting. The time may change next Wednesday depending on the length of Tuesday’s council meeting.