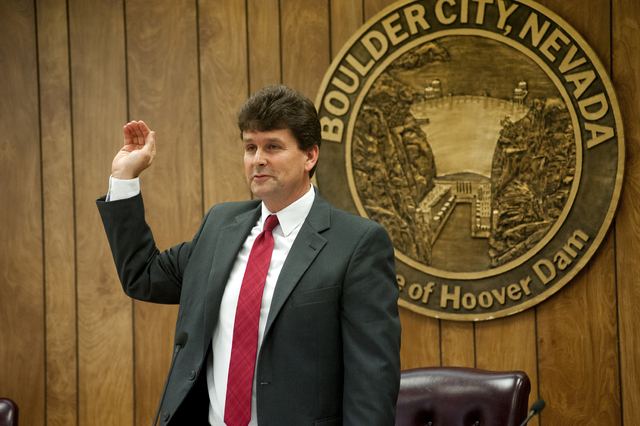 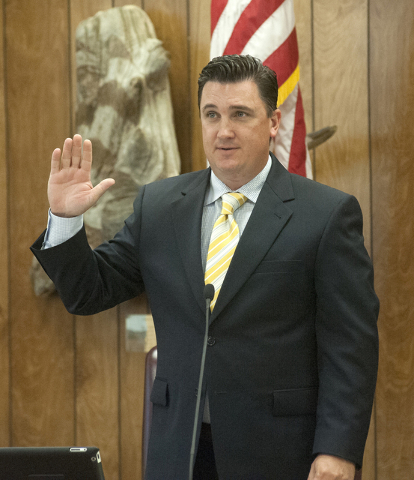 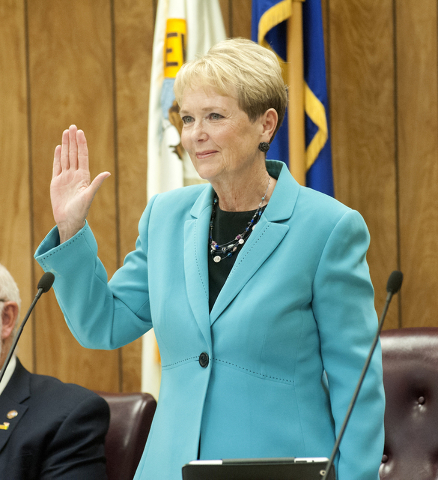 The City Council discussed many topics during its Tuesday night meeting, including building a power line, an updated street maintenance program and land development near Boulder Creek Golf Course.

It was also the first meeting for newly elected Councilman Rich Shuman, who finished second in the June 2 election to incumbent Peggy Leavitt. Rod Woodbury also oversaw his first meeting as the new mayor of Boulder City.

Shuman, Leavitt and Woodbury were sworn in before the meeting began, and all five council members were appointed and reappointed to various boards and committees in the county.

The new-look council had a full plate to manage, although a few actions, including the new power line and land development, were tabled for future meetings.

The 69,000 volt transmission line proposed for construction would help Boulder City feed power to Hemenway Valley if a portion of its substations were to fail, according to staff reports.

The capital improvement fund has 25 electric utility projects proposed for the next 10 years, and the high-power transmission line was recognized as the second-highest priority, according to staff reports.

The city is working with Electrical Consultants Inc. on the project, which came up with three options for the transmission line. The cheapest _came in at nearly $2 million.

“We don’t have the funds put together yet for this project,” City Manager Dave Fraser said. “The reason we’re getting a head start like this is that when money is available, we’ll be in a position to get started quicker on that project. Timing will be of the essence to us at that time.”

“This is just one piece of a larger system that we have to repair, so cost is going to be important,” Woodbury said. “We’ve been dealing with a failing project that is old, and we’re familiar with maintenance costs of an old system, so that’s got to factor in to the ultimate decision we make in terms of whether it goes underground or overhead.”

Council plans to revisit the issue in a couple of months.

Public Works Director Scott Hansen also addressed the city’s need to maintain its roadways, although limited funding has hampered the ability to do so, he said, adding that the city is responsible for about 85 miles of roadway.

Instead of reconstructing roads, the city will be sealing a portion of them because of budget constraints. The five-year maintenance and reconstruction plan will be a “fiscally constrained” one, Hansen added.

Hansen said it’s typical in the industry to replace an asphalt road every 20 years, although it would cost about $4.2 million per year to do so. If the city reconstructed its roads every 30 years, the annual cost would be about $2.8 million.

Currently, the city has approximately $860,000 to spend on road maintenance each year, Hansen said, although it is expected to gain $9.2 million from the Regional Transportation Commission for roadway projects starting in the 2018-19 fiscal year. The one-time payment would be available for use during a 10-year period.

The first two years of the existing five-year maintenance plan includes improvements along Utah Street, as well as a portion of Fifth Street and Juniper Way. Construction for those projects would be expected to start in the spring or summer of 2016, Hansen said.

The council also discussed possible land development near Boulder Creek Golf Course, but further action can not be taken without a recommendation from the city’s planning commission.

The item is expected to be heard by the commission within the next two months before being brought back to council, according to the city clerk’s office.

Council chambers in City Hall are going to be renovated to make the area more accessible for people with disabilities.

It’s official. During a special meeting Monday, June 28, morning, City Council members certified the results of the June 15 election that saw Mathew Fox selected for a seat on the governing board and two ballot questions to fund a new pool passed.