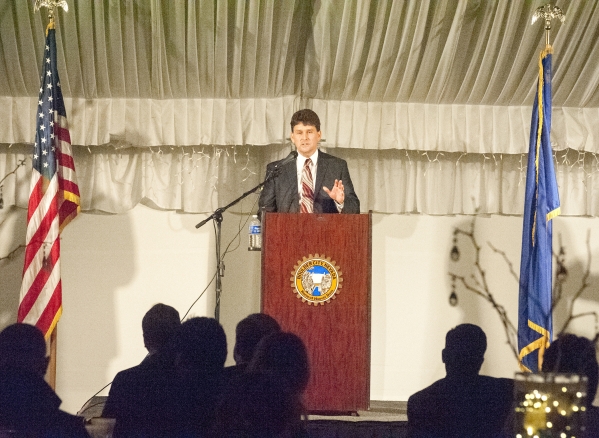 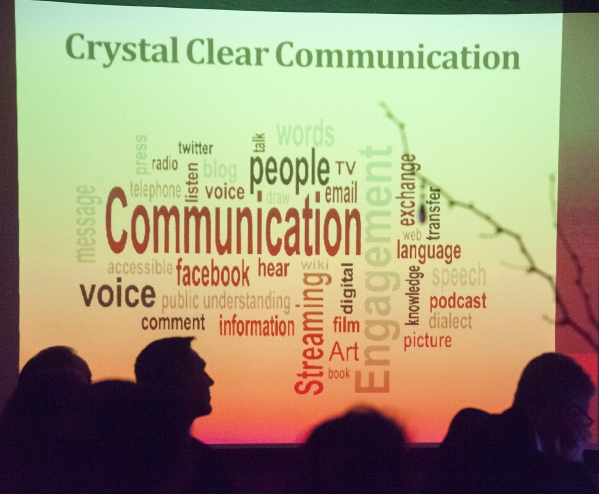 All eyes were on Mayor Rod Woodbury as he delivered his inaugural State of the City address on Jan. 21 at the Boulder Creek Golf Club. Despite a small microphone malfunction early in the mayor’s speech, Woodbury delivered a smooth, and thorough address, that touched upon the past, present and future of Boulder City.

“As I approach my first State of the City as Boulder City’s new mayor, I feel a bit like Liz Taylor’s eighth husband must have felt on his wedding night. I know what I’m supposed to do, I think I know how to do it, but I’m just not quite sure if I’m going to be terribly interesting for you,” Woodbury said jokingly to the audience of city officials and staff members, as well as community leaders and residents on hand that night.

Woodbury pointed out five things he envisions for the future of Boulder City: To put faith and family first, to be business friendly, having clear communication, keeping finances in order, and picking up the pace. If Boulder City is going to stand tall, those goals are the pillars that are going to hold this town up, according to mayor.

By far the longest discussion of the night was about the cultural changes he feels Boulder City needs to embrace in order to do business in the city. It’s a change he is going to make happen or die trying — not literally he hopes.

“Businesses let’s stop being territorial. A house divided against itself cannot stand. We succeed together not alone,” Woodbury said. “Who in their right mind would want to visit our city if we only had one hotel or one restaurant or, god forbid, one grocery store. Businesses, if for one second you think you are going to succeed by monopolizing the market and stamping out your competitors, think again.”

But it’s not just the businesses that need to make changes. Woodbury compared working with city officials as going to a “slaughterhouse” because of their negative mentality. He said he wants to staff to treat area businesses as partners and with respect, focusing on finding solutions rather than problems.

Woodbury’s address about doing business in town comes a week after two mysterious notes urging Boulder City residents to contact councilmen Duncan McCoy and Cam Walker were left on the Browder Building and former Scratch House, both owned by Charles Lawson and both boarded up because, according to Walker, Lawson believes City Council was not being responsive to downtown businesses.

“When he talked about working with businesses (that) was the best part of his speech honestly,” said Boulder City resident June Kohl. “I’ve heard a lot of negative things, and he did a good job talking about opening up and welcoming people in.”

The mayor also recognized the construction of the Interstate 11 project, that will eventually connect Phoenix and Las Vegas. Woodbury said that the construction of the interstate will decrease the amount of truck traffic that goes in and out of Boulder City, and create easier travel opportunities for people trying to access Boulder City’s downtown businesses. The project looks to be finished in 2018.

Woodbury did briefly talk about the Boulder City Animal Control, but did not mention the ongoing investigation of the former animal shelter supervisor Mary Jo Frazier. Instead he discussed how much improvement the shelter has seen since the new supervisor, Ann Inabnitt, has taken over the reins.

“Animal control saw a supervisory change in 2015, resulting in new-found community support, both in the number of volunteers and animal adoptions,” Woodbury said. “Since April, when Ann Inabnitt was appointed as the animal control supervisor, at least 139 animals have been reunited with their families, and another 95 have been adopted by the year’s end.”

Inabnitt was awknowledged as the employee of the year for 2015 for her work on turning the image of the animal shelter completely around. She officially accepted the award Tuesday during a City Council meeting.

Along with praising Inabnitt, Woodbury also gave his appreciation to retired Police Chief Bill Conger. Conger stepped down on Jan. 11 amid the ongoing investigation with Frazier.

“What a fine gentleman he was during his service. He came out of retirement to help us out and we really enjoyed our association with him. (I) extend the best wishes to him going forward and thank him for his service over the last three years,” Woodbury said.

Conger did not pursue any charges against the former animal shelter supervisor, and has been highly criticized by community residents for how he handled Frazier’s case.

One of the proudest moments of the night for Woodbury was when discussing the revenue the solar leases have created for Boulder City. According to Woodbury, $10 million of unrestricted funds were brought in from those leases, funds that went toward paying off Boulder City’s general fund debt in its entirety, including the debt that was incurred while building the Boulder Creek Golf Club.

“One of the more important things he talked about was the financial state that they had, particularly with the golf course and the retirement of that debt,” Rhinehart said. “He talked about the problems with the utilities and aging, but they’ve got a good handle on it. They know what is going to be needed and how they are going to pay for it.”