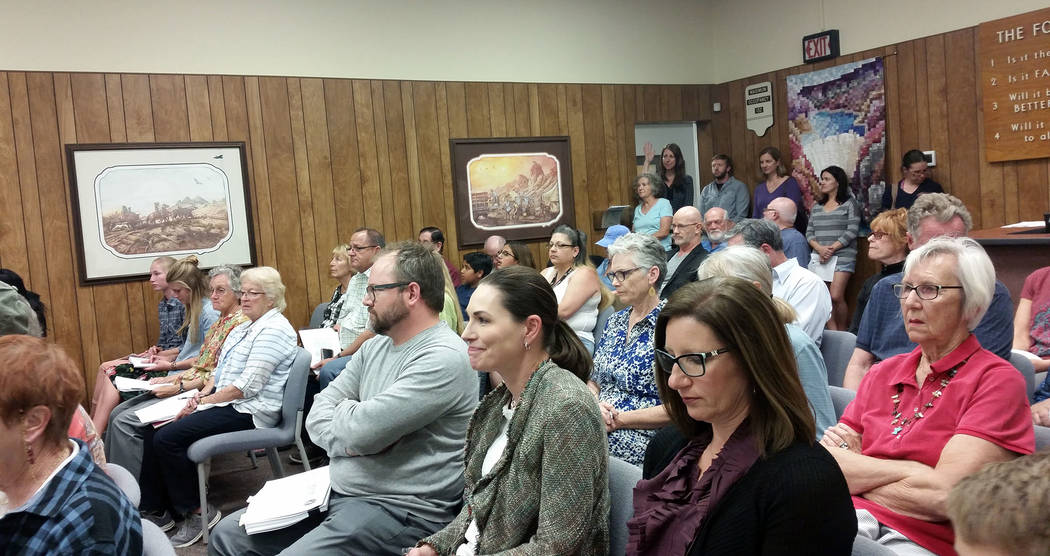 Recently, the council approved having a ballot question on whether to sell 1.72 acres of city-owned land at 1401 Boulder City Parkway, which houses the historic airport hangar.

The old water filtration plant at 300 Railroad Ave. has also been under discussion. In addition to the plant, it houses the community garden and Reflections park. Council directed staff in January to research some outstanding ownership issues with the property and lease options for the parcel rather than create a ballot question about its potential sale.

“I don’t want to sell any historic buildings in this town, especially the water treatment plant, the beautiful gardens and the hangar. … I just think if you’re going to put it on the ballot, it’s not going to pass,” said resident Deb Finnegan. “It’s going to be a big waste of money.”

“If we’re going to call ourselves historic, we need to save every historic part of it,” said Peggy Kelly Durfey, whose family has been in Boulder City for five generations.

Resident Jill Rowland-Lagan said she believes in being part of the solution with these historic preservation issues and volunteered to organize a foundation for it.

“I’m that passionate about it,” she said.

Rowland-Lagan said the foundation would be a good opportunity for public and private partnerships.

“I’d even contribute my own money to get it started because they don’t start by themselves,” she said.

At Tuesday’s meeting, council also approved a resolution that allows City Manager Al Noyola to provide consulting and transitional services for the city of Arvin, California. Noyola was its city manager before coming to work in Boulder City approximately a month ago.

“It’s really more geared for me to assist the city of Arvin in two potential litigation cases moving forward,” he said.

If they go to litigation, he could be called as a witness or to provide information from his previous role with the city.

He also said that the resolution would not cost Boulder City anything because he would take vacation time, should he be needed for these matters during a work day.

The contract with Arvin allows him to provide up to four hours of work per month, for the first three months, without charge to the city. Any time in addition those hours, he would paid $70 per hour; he’d also be eligible for mileage reimbursement and reasonable travel expenses by Arvin.

Noyola said that if Boulder City did not approve his transitional contract with Arvin, he could be subpoenaed or deposed if the cases proceed to litigation, which could cost the city money.

Councilman Kiernan McManus said that the resolution should also include the contract’s end date, and a six month update to council by Noyola.

Noyola said that wouldn’t be a problem and even suggested monthly updates as he will be providing monthly invoices to Arvin to account for his time.

Resident Kristel Hoskins said she did not agree with the contract.

“I don’t want my dime paying for an employee to work in another city,” she said. “If he wants to moonlight, he can do it on the weekends.”

Resident Judy Dechaine agreed and said that Noyola should do that work after hours and on the weekend.