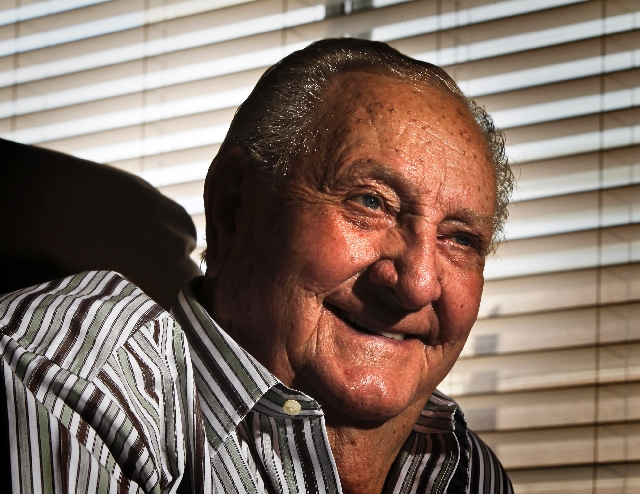 “Vegas,” the television show based loosely on Ralph Lamb’s life, had just been canceled, but the former Clark County sheriff wasn’t losing any sleep over it.

Not only was there a good chance the CBS cops-and-mobsters serial starring Dennis Quaid as Lamb would be picked up by a cable network, but the real former cowboy sheriff of Southern Nevada doesn’t let much of anything get under his skin these days. At 86, with a sizable list of physical ailments related to age and a life spent riding horses, roping steers and trading punches, he isn’t sweating the small stuff.

Newcomers to Nevada and casual viewers may not know how far Lamb came from extremely humble roots in Alamo to establish himself as the toughest lawman in Las Vegas history and the stuff of melodramatic TV shoot-’em-ups.

During a recent interview at his Las Vegas home, he talked about his start in life and law enforcement.

“We grew up on this ranch up in the next county,” Lamb said. “At one time this was all Lincoln County. In 1909 I think it was, they cut it in two. It went from Searchlight to Pioche for the county seat. There wasn’t no law enforcement around then. We had a truant officer. You imagine making a run from Pioche to Searchlight; that’s an all-day trip, at least, chasing some guy. There was one truant officer for the county. He was the one guy everybody knew, but we never had no trouble with him. The kids always policed themselves. There was a pretty good bunch of kids grew up there.

“We worked on them ranches, punched cows and put up hay, cowboyed for the guys that had the money.”

The cowboy life was rough and nothing like it was portrayed in Hollywood. One of seven brothers, Lamb lost his grandfather and father to horse accidents. His father was killed trying to rescue a young rider on a runaway horse on July 4, 1938, during a Tonopah rodeo.

“It made us all responsible,” Lamb said. “He was a young man, about 40. It was one of them things. Later in years, I went in the Army when I was 17. That kind of got me started in being around the police, you know. In the Army, I was in Korea after the war, repatriating all them people to their right countries. I ran into this boy. We were sitting in this old shack, the kind where they take grass and make a little house out of it. He said to me, ‘Where are you from?’ I said, ‘Nevada.’ He said, ‘So am I.’ And it was that kid that was on the runaway horse that my dad had saved. It nearly scared him to death for a minute. I guess he’d lived with that all the time. It wasn’t his fault. He was just a kid then.”

After Korea, Lamb returned to Nevada with mouths to feed.

“I went in to see the sheriff, Glen Jones,” Lamb said. “And Pearl Brown, that’s Sen. Mahlon Brown’s mom, was his secretary. She said, ‘What can I do for you?’ I said, ‘Mrs. Brown, I need a job. I got two brothers, little ones, and a sister at home in Henderson. I need a job.’

“She said, ‘What kind of work do you do?’ I said, ‘I just want to be a deputy sheriff. What kind of jobs do they got here?’

“She went back and talked to Glen. He came out and gave me a badge and said, ‘Go ahead over there and work in Henderson. Go see (Deputy) Hayward Milligan. Report at 4 o’clock.’ I went walking in there with no clothes, a pair of Levi’s on, a gun stuck in my belt. Old Milligan, he left and went home.”

And just like that, Deputy Sheriff Ralph Lamb reported for duty.

Things were about to get interesting for the Alamo boy who made good.

Nevada native John L. Smith also writes a daily column for the Las Vegas Review-Journal. Reach him at 383-0295 or at jsmith@reviewjournal.com.