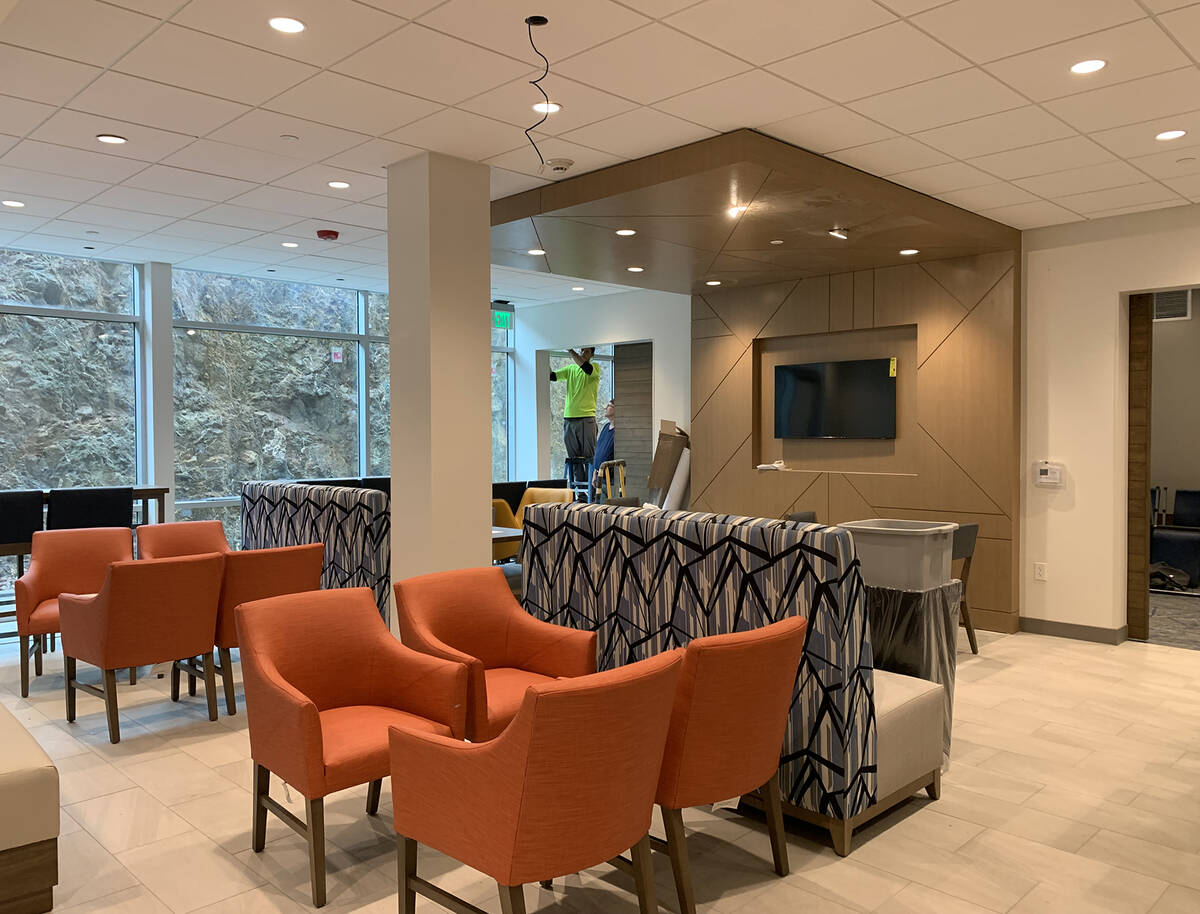 (Hali Bernstein Saylor/Boulder City Review) Construction crews continue to work on the new Holiday Inn Express & Suites at Railroad Pass on Thursday in preparation for its Nov. 17 grand opening. The 127-room hotel is a partnership between Railroad Pass and IHG Hotels & Resorts. 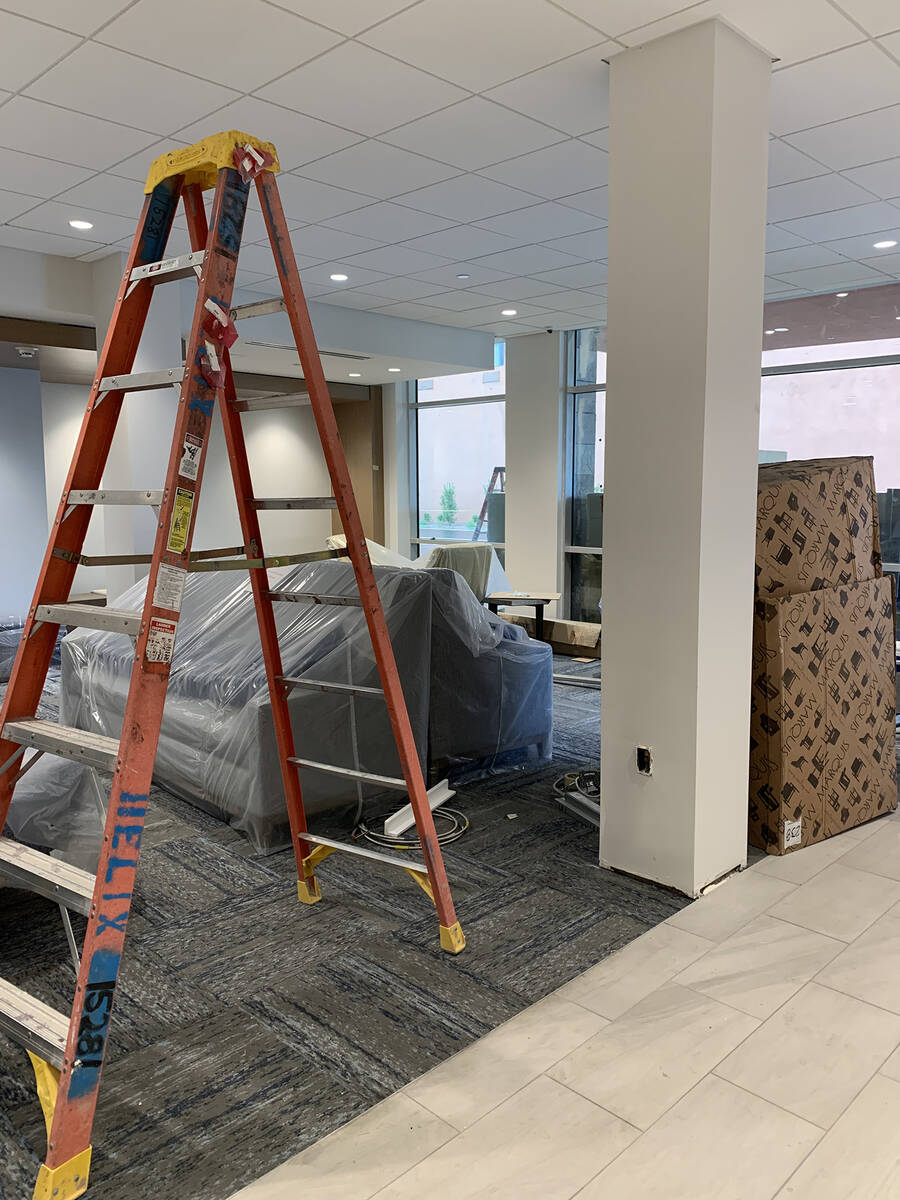 (Hali Bernstein Saylor/Boulder City Review) Furniture awaits to be placed in the nearly finished lobby area of the new Holiday Inn Express & Suites at the Railroad Pass on Nov. 3. The new 127-room hotel will host a grand opening Nov. 17.

The new four-story hotel, built behind the existing hotel tower, is in partnership with IHG Hotels &Resorts and brings a modern, contemporary look to the oldest continuously operating casino in the state.

The new four-story hotel will have 127 rooms, including 53 suites. It is decorated in shades of blue, gray and black, with pops of orange and mustard yellow.

“I’m really looking forward to having a new hotel,” said Joe DeSimone, owner of the Railroad Pass. “Maintenance on the other is so extensive.”

““We are very pleased to have had the opportunity to partner with Joe DeSimone. With his team’s vast experience in hospitality, we know this partnership will continue to build our reputation for providing simple, smart service at a high quality for any type of journey,” said Stephanie Atiase, global brand head for Holiday Inn Express

The rooms feature one or two beds, flat-screen televisions and a desk, along with other amenities. They also will offer better views of the trains from the Nevada State Railroad Museum that pass by on the tracks behind the property as well as the unique rock formations on the nearby hillsides.

DeSimone said the hotel’s proximity to Boulder City should benefit those who plan to visit the community by adding more rooms, especially during weekends when there are large events such as Art in the Park and Spring Jamboree.

“Expanding into new locations, such as Boulder City/Henderson area shows our desire for continuing our growth and ensuring we are there to provide a unique and memorable experience, whether for business, leisure or a little bit of both,” Atiase said.

Overnight guests of the Holiday Inn Express will be able to get a free breakfast in the first-floor dining area, one of the many common areas featured in the new hotel.

A gym/fitness center and soon-to-be completed pool will be accessible to guests of both hotels. DeSimone said once the new pool is fully operational he plans to turn the existing facility at the Railroad Pass into a dog park.

In-house laundry services will handle all of the Holiday Inn Express &Suites’ linens, and DeSimone said he hopes to expand that to include washing the linens from the Railroad Pass as well as hotel guests and truckers who stay on the property.

Because dining opportunities are limited, DeSimone said he is in the process of obtaining permits to add an approximately 8,000-square-foot tavern, the Bullet Train Tavern, that will have 110 seats, a bar and slot machines.

“The name feeds off the Railroad Pass,” he said, noting they anticipate construction starting in the first quarter of 2023.

Between the front desk, back of the house and marketing, about 25 new employees have been hired, DeSimone said, noting that some operations could be handled by existing staff members.

According to DeSimone, the Holiday Inn Express operates in a more efficient manner, with energy-saving features. The environmental impact also was reduced during construction, with all of the cardboard boxes that contained furniture and building materials recycled, he said.

Two weeks ahead of the opening, the hotel was operational and inspections with Henderson city officials were conducted. Workers scrambled to put the finishing touches and furnishings in place.

Construction on the new hotel took about 13 months to complete. In anticipation of delays due to supply chain issues, DeSimone said they ordered furniture and other items that could be difficult to procure and stored them in containers on the property.

According to DeSimone, booking a stay at the Holiday Inn Express will be a combined effort between the reservation systems of Railroad Pass and IHG and its reward program.

In addition to the new hotel rooms and suites, the existing hotel tower at Railroad Pass has 120 rooms. DeSimone said there will be different price points between the two properties.

With the apparent success of this partnership on the horizon, DeSimone and IHG have already agreed to partner on a new hotel in Henderson, he said.

A grand opening celebration is planned for 4-6 p.m. Nov. 17, where community members will be able to tour the new hotel.