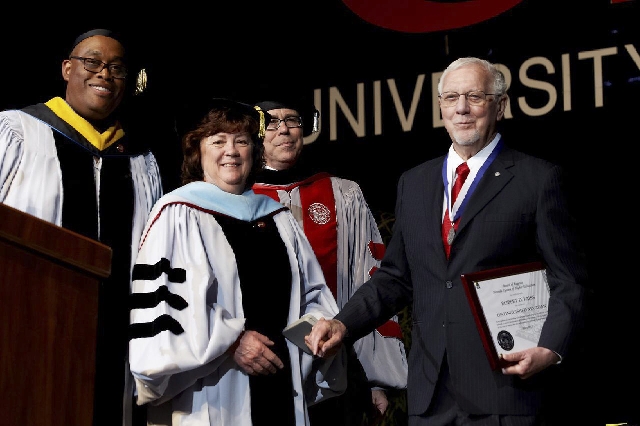 Since 1959, the University Board of Regents of the Nevada System of Higher Education has bestowed the Distinguished Nevadan Award to prominent individuals who have made significant achievements contributing to the cultural, scientific or social advancement of the state.

With seemingly increasing frequency, those Nevadans have come from Boulder City.

Resident Robert D. “Bob” Faiss was the latest inductee, receiving the honor during Sunday’s commencement ceremony at the University of Nevada, Las Vegas. He was inducted into what has been called “Nevada’s Hall of Fame” by the magazine “Regents’ Review.”

Faiss commented on his recent honor by giving credit to university Regent Andrea Anderson, who nominated him. “It’s all due to her,” Faiss said . “I can’t take any credit.”

Anderson nominated Faiss for a number of reasons, not least of which is that Faiss is “a world-renowned authority on gaming law, and he’s done so much for gaming law, for the students of Nevada and teaching at the Boyd School of Law,” she said.

Add to his gaming expertise, his work as city editor for the Las Vegas Sun, his position as assistant executive secretary for the Nevada Gaming Commission, his service to Nevada Governor Grant Sawyer (1959-1967) as executive assistant, his work with the U.S. War on Poverty Program, his work in President Lyndon Johnson’s staff in 1968 where, according to Faiss, he “did every kind of special assignment” that came up and numerous other talents, the “Bob Faiss” kindness and unassuming nature, and the Distinguished Nevadan award becomes even “more special and more important,” Anderson said.

“Bob doesn’t talk about himself and just does what needs to be done,” she said

Faiss has come to be the expert in gaming law that he is today because he created it. Yet, it is almost impossible to get the 78-year-old Faiss to use the word “I.” He explains the creation of national and international gaming law this way.

“Most of the things we’ve done over the decades have been for the first time,” Faiss said. “We broke ground in the interpretation of application of statutes and regulations. So there’s no model for most of what we did. There’s no form book for what we did. We made it up. And it became standard in many cases, but we did it for the first time.”

Faiss did admit he types his own materials of legal and special documents with regard to gaming issues.

“Each one is different,” he said, but quickly adds, he does have an assistant who “perfects things” he prepares.

When pressed to discuss the qualities he believes he and those who have come to be called Distinguished Nevadans possess, Faiss said, “I think the quality I share with them is a great love for and pride in Nevada, that we are different to a large extent, and we have the ability to carry our responsibilities and being a leader in various respects. We come from a background of opposition from other states that they didn’t have to overcome. At one time we were a pariah in the eyes of every other state and of the federal government because we had legal gambling.”

“Today, virtually every other state and most countries are looking to Nevada as supreme in the area (of gaming) and looking to us for guidance and seeking to emulate Nevada’s success and Nevada’s structure,” Faiss said. “So what a turnabout that is from where we started.

“It’s a tribute to all of our regulators and the people of the gaming industry and the governors and the legislature. It’s been kept, alone anywhere in the nation, been kept free of partisan, political influence. Governors have kept their hands off and just gave policy guidance. They never sought favoritism or made decisions based on partisan politics. That’s one of the reasons it’s a premier system.”

Faiss speaks of “gaming regulators,” past and current members of the Nevada Gaming Commission, as “learned, inspired and committed people.” There’s not a word of credit for himself, the architect of today’s system of gaming law.

Despite all his contributions to the growing casino industry, he never expected to be named a Distinguished Nevadan.

“I don’t think I’m worthy of it, but I’m very, very appreciative of it,” he said.

Past recipients of the Distinguished Nevadans award from Boulder City included the late Gene Segerblom, who received the award in 2011, Bruce Woodbury, Sara and the late Ralph Denton, and former Nevada governor the late Mike O’Callaghan.