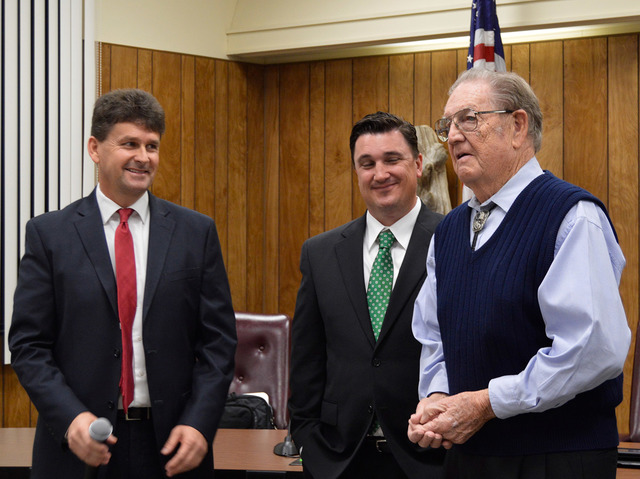 Max Lancaster/Boulder City Review Bill Andrews Award winner Joe Rowe, right, is congratulated by Mayor Rod Woodbury, left, and Councilman Rich Shuman. Rowe was presented with the award during the City Council meeting Tuesday for his volunteer work with American Legion Post 31 as well as his work with Emergency Aid of Boulder City. Christy Springgate-Hill was also given the award posthumously for her volunteer work in the community. Springgatte-Hill lost her battle to cancer in October.

City Council unanimously approved three plots of land be placed on the land management plan at its meeting Tuesday night.

Added to the plan for further discussion and study will be 91 acres in Bootleg Canyon Trail where potential business owner Jose Zelaya hopes to build a training facility for competitive obstacle course running. While the city council did approve the 91 acre request, Zelaya said that he only wanted 10-20 acres.

“I am under the impression that Mr. Zelaya does not know where he wants to put this training facility on this land so we are going to study the whole 91 acres,” Mayor Rod Woodbury said.

The parcels will now be studied and surveyed by the public for their potential uses. If a plan is deemed viable, it will go back to the Planning Commission for master plan recommendations; however, putting something on the land management plan does not mean it will be put on the master plan or even be brought to the Planning Commission or council.

Citizens who spoke were overwhelmingly against all three parcels being placed on the master plan.

Kiernan McManus said that he had an issue with putting proposals on the land management plan just to start a discussion and used Zelaya’s proposal as his rationale.

”Mr. Zelaya came in here with no financing, no business success and nothing more than a request for land and that is all he needed to be on the land management plan,” McManus said. “I have been in this town for a long time and in Boulder City one thing leads to another so if we designate land for a certain use, then we will use it for that use.”

McManus’ comment was in response to Councilman Duncan McCoy, who said that he supported putting all the proposals on the master plan since that is the first step to transparent discussion.

“I am going to approve these proposals because I think this is the first step to driving public discussion,” McCoy said. “The land management plan takes the proposals out of the back room and brings it in front of you with everyone weighing in and participating.”

Woodbury expressed the same sentiment, saying that the land management plan is not deciding how city land will be used but an opportunity for the citizens to tell the council what type of town they want to be in the future.

While the council did vote unanimously on all three proposals, Councilman Cam Walker had concerns about the city’s 586 acre proposal near the interchange.

“We have this area labeled for light industrial so we are saying that we want light industrial manufacturing to be at the entrance of our town. I don’t think that is the image we want people to see when they first come into Boulder City,” Walker said. “We can put this on the land management plan, but we need to recognize how long we keep it on there. If we have interest, then let’s continue the discussion; but if not, then I want this proposal off the land management plan next year.”

City Manager Dave Fraser said that there has been some interest in the parcels, but that the city had agreed to a nondisclosure agreement so no name was revealed. Fraser said this was common in early discussions of this nature about a piece of property.

“We have had some interest in these parcels of land, but we do not have an agreement with anyone,” Fraser said. “We wanted to put these on the land management plan because if we ever do get someone who wants to build on those parcels, we can speed up the process.”

Resident Dale Napier said that the council was being hypocritical talking about transparency when interest over city-owned land was hidden under a confidentiality agreement.

“You keep talking about transparency, but we don’t know who is interested in this city land,” Napier said. “When are we going to know who this person is and when is the transparency going to start.”

The city will hold public workshops for the land management plan at the start of the new year. The first workshop will be held at 6 p.m. Jan. 25 at the Elaine K. Smith Center, 700 Wyoming St.

In other actions, City Council:

Approved new utility fees for water, sewer and electric connections as well as for recycling, waste and the Boulder City Municipal Cemetery.

“I think the commercial is subsidizing the residential too much so I want to amend the rate increase to 6 percent across the board,” he said.

Residential users will see a flat increase while commercial costs are determined by the size of the trash can and amount of trash service needed.

Residents will see another rate increase in 2018; that increase is based off the Consumer Price Index.

Water, sewer and electric connection fees will be increased by 2.5 percent every year and they are one time fees to connect a piece of property to municipal utilities. The cost depends on the size of the connection.

“This is a fee increase that will not affect most people, because they are not building a new home or business,” said Public Works Director Scott Hansen.

n Presented the 2016 Bill Andrews Award to Joe Rowe and Christy Springgate-Hill. Rowe was given the award for his work with American Legion Post 31 as well as his support for Emergency Aid of Boulder City.

Springgatte-Hill was given the award posthumously for her volunteer work in the community. Springgate-Hill lost her battle with cancer in October and council members felt it was appropriate to honor her so that the community could remember her.

“She was a tireless worker who lead with her heart and she was admired by this community,” Councilwoman Peggy Leavitt said.