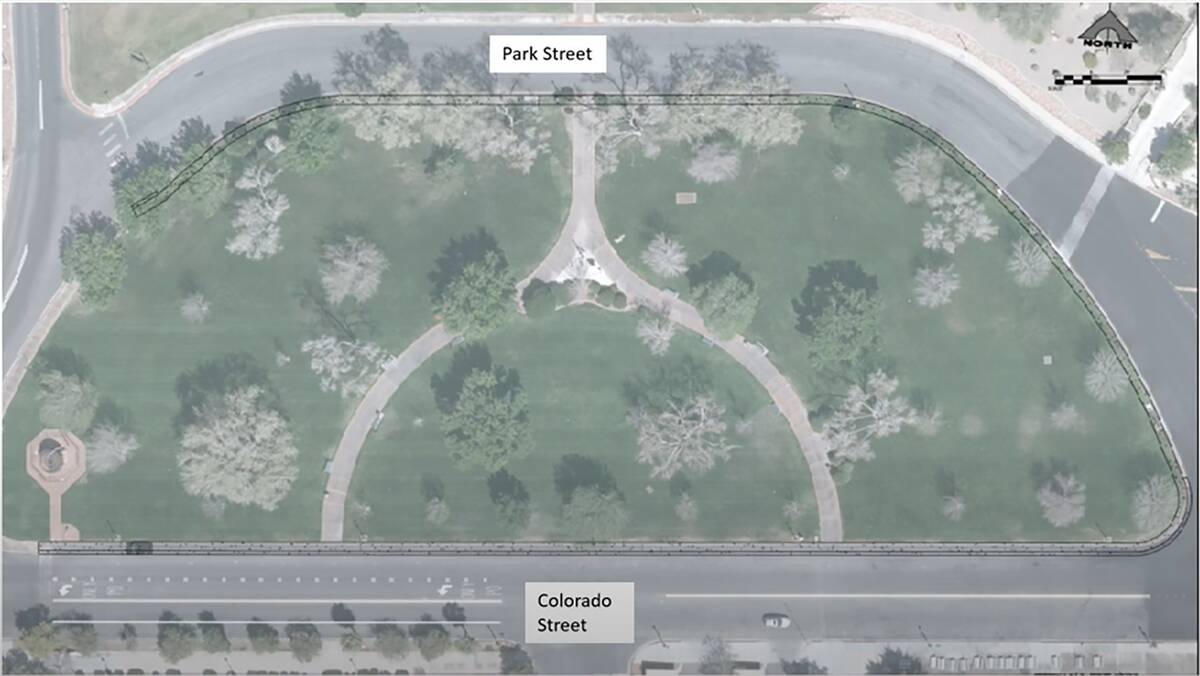 (Photo courtesy Boulder City) The black border on this aerial view of Wilbur Square Park shows where a sidewalk could be built.

(Photo courtesy of Boulder City) Parking/charging stations for electric vehicles will be included in the rehabilitation of Nevada Way in downtown Boulder City.

Electric car parking/charging stations, increased crosswalk lighting, new crosswalk bollards, bistro lighting and added bike racks were all discussed. Completing the sidewalk surrounding Wilbur Square Park was also one of the main talking points, as the park currently only has a small perimeter sidewalk in the southwest corner of the park.

Bob Mernan and Joey Otson of GCW Engineers/Surveyors presented the plan to City Council. They stated that the project would cost approximately $2.5 million with an eyed starting construction time in October or January. It would then take 120 days to complete.

Funding would be provided by the Regional Transportation Commission of Southern Nevada.

The council brought forth their concerns about construction, especially bringing even more limited parking in the downtown historic district, as well as the bistro lighting, overall aesthetics and visibility at the intersection of Nevada Way and Arizona Street.

Currently, there are 83 parking spaces, one of which will be eliminated when four are converted for electric vehicle charging, if the project is built as presented. The existing four spaces for handicapped drivers would remain unchanged.

Councilman James Howard Adams mentioned his concerns with street clutter. Fellow councilmember Claudia Bridges piggybacked off his concerns and brought up the blind community in Boulder City and how much of a challenge it is already to navigate the city.

Mayor Kiernan McManus stated that he had concerns about the city losing some of its historic architecture.

“What we have in the Nevada Way area was constructed with a specific type of architecture which I would call eclectic. It has been changed over the years, and by changing these things, we lose our historic architecture,” he said.

According to Lisa LaPlante, city communications manager, council members could discuss this project at a future meeting.

“The street is certainly in need of some work. But let’s make sure the project doesn’t put anybody out of business and that we end up with a good product,” McManus said.