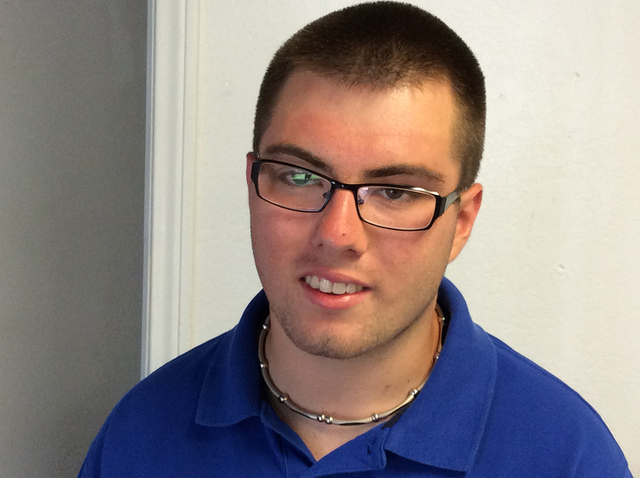 When it comes to taking an active role in getting the job done, there’s no doubt 16-year-old Alex Ray will be somewhere nearby.

The Boulder City resident, who will be a junior at Canyon Springs High School in North Las Vegas in the fall, is a born leader.

Enrolled at the magnet school’s leadership and law preparatory academy, Ray is a cadet master sergeant in the Air Force Junior Reserve Officer Training Corps and held a leadership position in staff class last school year. He has participated in the last summer’s leadership school for the corps and will run the program in August as the cadet coordinator.

Most recently, he participated in June in the Hugh O’Brian Youth Leadership program at UNLV.

“It was a lot of fun,” Ray said of the three-day program that featured speakers, panel discussions and workshops.

HOBY was started in 1958 by actor Hugh O’Brian after he spent nine days with Dr. Albert Schweitzer at his clinic in rural Africa. Schweitzer stressed the importance of change and teaching young people to think for themselves, prompting O’Brian to start the leadership program. Its mission is to inspire and develop a global community of youth and volunteers to a life dedicated to leadership, service and innovation.

After completing HOBY in Las Vegas, Ray was invited to participate in the World Leadership Congress in Chicago, which will be July 19-26. More than 400 youths from around the world are expected.

Ray said he hasn’t registered for the conference yet because he must pay the fee at the same time. Participating in the leadership event will cost him approximately $2,500 and he has started a GoFundMe account to help offset the costs.

The program’s main goal — empower, lead, excel — inspired him. He said he hopes to get involved in human rights issues once he completes college and enact changes throughout the world.

In the near future, he said if he raises more money than he needs to attend the world conference, he would like to donate it to bring Camp Kesem to Nevada. The camp provides an outlet for children affected by a parent’s cancer.

Ray said he was pointed in the direction of leadership programs by friends and teachers, who noted his natural ability to lead others.

The part-time perfectionist said his take-charge attitude stems from wanting to ensure that things get done.

The son of Chris and Ellen Ray of Boulder City, he has been a resident of Boulder City for most of his life. Ray attended Mitchell and King elementary schools and Garrett Junior High.

He said he is fully committed to the leadership program, choosing to ride the bus for two hours each way every day to attend the magnet school. Although he said he should be keeping up with assignments during the long rides, he acknowledges sneaking in some much-needed sleep.

In the fall, he will take five or six Advanced Placement courses, in addition to continuing with AFJROTC.

“He is very dedicated, intelligent and done well in the corps,” said Col. Bruce Brown, senior instructor for AFJROTC program at Canyon Springs. “He is head and shoulders above his peers.”

Brown said Ray is one of the strongest male leaders in the corps and will serve as a squadron commander next school year, supervising about 80 cadets.

“He is well-organized and a good communicator,” Brown added.

When not focusing on his studies or AFJROTC duties, Ray volunteers at the Christian Center Church, where he has helped run audio-visual programs for about two years.

According to Christopher Borg, who heads the church’s audio-visual program, Ray is dedicated and a hard worker.

Borg touted Ray’s willingness to help and learn as much as he could.

Anyone wishing to help sponsor Ray’s trip can visit www.gofundme.com.aeteb0 or contact him at Alex4achange@gmail.com.